Happy New Year! Today I wanted to look at some data for the season, discuss takeaways for the Pittsburgh Steelers Week 17 matchup against the Cleveland Browns, and pose some questions for you the readers. 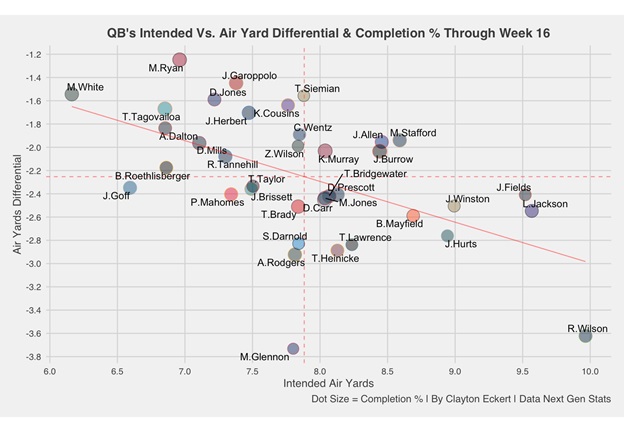 With this view we can see Browns quarterback Baker Mayfield ranks sixth in Intended Air Yards with an 8.7 number highlighting the need for Pittsburgh’s defense to be ready for such throws, but the connectivity has been another story with a -2.6 air yards differential that ranks 31st out of the 38 quarterbacks along for a 29th ranked completion percentage of 62.4! It will be very interesting to see how he performs coming off a four-interception game against the Packers and how the Steelers defense fares against the pass.

Steelers quarterback Ben Roethlisberger lands on the middle left of the graph, just above the mean in air yards differential at -2.2 which ranks 18th, and a higher completion percentage than Mayfield of 67.5 (20th), but his intended air yards average has come down (6.9) the last two games after averaging 7+ from Week 11-14. With the news that this will likely be his final home game against a division rival on Monday Night Football, let’s hope he has a vintage type performance.

How do you think the quarterbacks will perform with so much on the line? 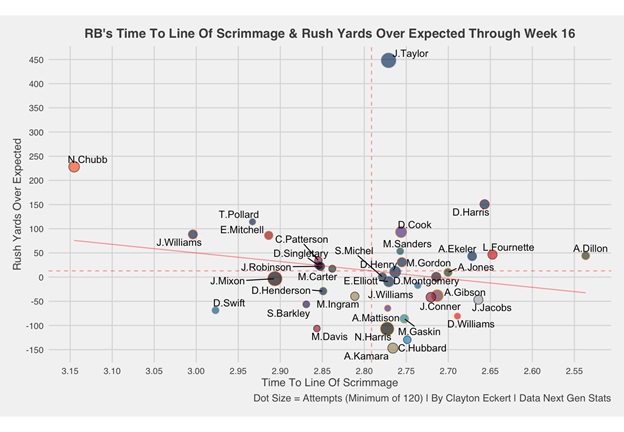 Browns running back Nick Chubb is having a fantastic season, second to Colts Jonathan Taylor and his MVP worthy season in yards over expected. Chubb lands on the top left of the graph, spending the most time behind the line of scrimmage. This is largely due to the stretch zone scheme and counters, waiting for his great offensive line to set up before maximizing their efforts. He has 1143 rush yards (3rd in NFL) on 207 attempts, compared to Steelers running back Najee Harris’ 984 yards (5th in NFL) on 61 more attempts! This highlights Harris’ placement bottom on the graph, with the dot size representing the volume being there, but third lowest rush yards over expected with this struggling run game.

Kareem Hunt is RB2 for Cleveland when healthy, and is questionable for the matchup. He has played in eight games, rushing for 386 yards and five touchdowns. D’Ernest Johnson has performed well in his opportunities with Chubb and Hunt missing time, with 70 runs for 398 rush yards. Demetric Felton has sprinkled in, mostly in the passing game and would likely split time as the backup with Johnson if Hunt is out.

Another huge key that could complicate Pittsburgh’s defensive success against the run is availability. On Friday defensive lineman Chris Wormley and linebacker Joe Schobert landed on the COVID list and are likely out, along with linebacker Devin Bush and Arthur Maulet on the list as well. Linebacker Buddy Johnson seems unlikely as well with his injury, but a bit of good news is they have activated defensive lineman Isaiah Buggs. Monitoring any other activations (or lack thereof) could set up in Cleveland’s favor, who were affected more by COVID than any other team earlier in the season.

How will the run games fare?

Next let’s look at the wide receivers for the matchup: 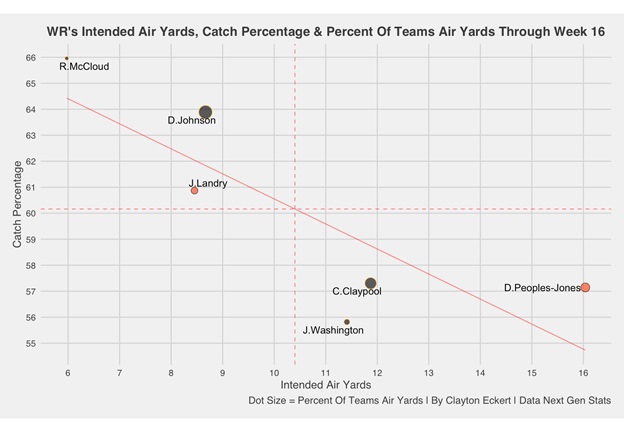 Jarvis Landry has been WR1 for Cleveland when active, after the departure of Odell Beckham Jr. He returned last week along with several teammates and has missed 5 games in total this season. In the week eight matchup against the Steelers, he had 65 receiving yards on five receptions, but ten targets for a lower completion percentage than his season average above (60.87%).  His intended air yards sit at 8.45, highlighting the short to intermediate targets on average. Landry is also used in the running game, and hopefully Pittsburgh’s defense will limit him again like the first matchup.

Donovan Peoples-Jones is the only other Browns wide receiver with 43 or more targets (49), and we can see he is Mayfield’s deep target with 16.04 intended air yards which is second in the league! Peoples-Jones has only caught 28 of his targets though for a low 57.14 completion percentage. He did not play in the first matchup in Week 8, so it will be interesting to see how he fares this game.

Wide receivers Chase Claypool and James Washington have more intended air yards for Pittsburgh, hopefully we can see a better connection with the former getting more opportunity and considering positive moments recently. Steelers wide receiver Diontae Johnson has 8.67 intended air yards along with a 63.89 catch percentage, and hopefully he can bounce back from last game where he had mistakes that he generally has cleaned up this season. In the last meeting with the Browns, Johnson was targeted by Roethlisberger 13 times but only six catches for a very low 46.2 completion percentage, so definitely looking for a better connection with these two in particular. Ray-Ray McCloud unsurprisingly has the lowest intended air yards on the graph, and a lower catch percentage of 50% last week bringing his average down to 65.96%.

Which receivers will have strong games?

Here’s an interesting view for the tight ends: 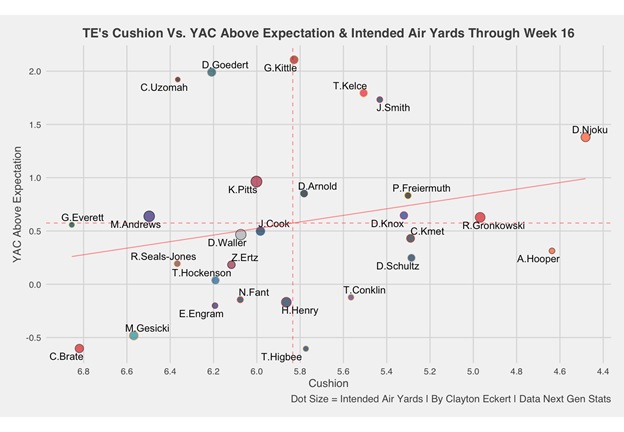 Right away the two Cleveland tight ends jump out with the least amount of cushion, highlighting their usage and threat in the run game as I broke down more thoroughly in my Division Outlook. David Njoku has the sixth ranked YAC above expectation, and threat in the play action game that the Steelers linebackers could struggle with, especially with the injury/COVID losses. Cleveland tight end Austin Hooper has the second most targets and receptions on the team, more of the short intermediate receiver and leads the position with 36 receptions.

Steelers tight end Pat Freiermuth lands above the mean in both data points, with the sixth rank in least amount of cushion and ninth in YAC above expectation! It will be great to have him back in the matchup after missing Week 16, hopefully a missing ingredient to help get the offense on track.

For offensive lines, I wanted to share the publicly available top ten results for Pass and Run Block Win Rates from ESPN analytics: 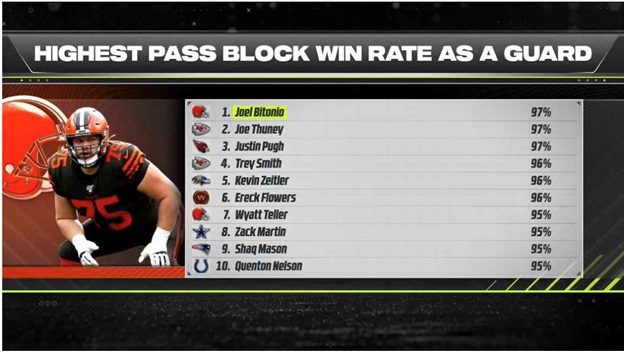 Cleveland guard Joel Bitonio ranks first at the position in pass block win rate along with his teammate Wyatt Teller ranking seventh! Steelers Defensive lineman Cameron Heyward will really need to step up in this game, and whoever wins this interior matchup will likely provide a victory on Monday night. 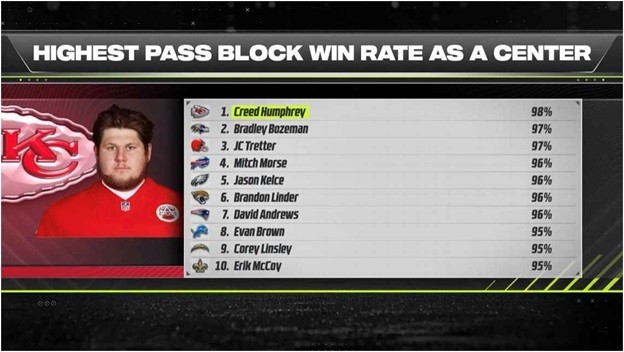 J.C. Tretter ranks third at the center position for the Browns and… 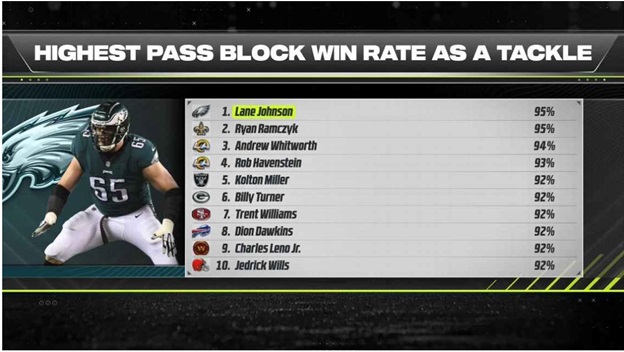 Cleveland tackle Jedrick Wills is also in the top ten at the position, so four of their five offensive lineman rank top ten in the pass block win rate metric at their respective positions! 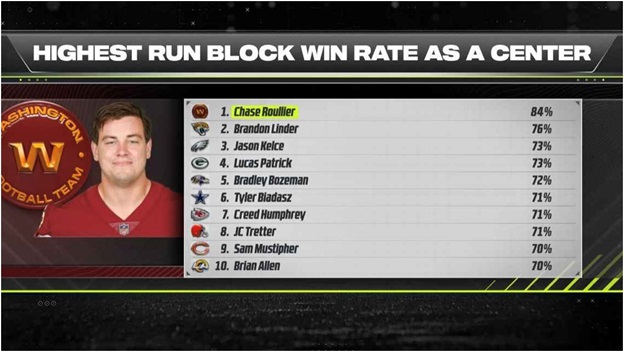 Tretter also lands on the top ten for run block win rate at eighth, highlighting the strong play Cleveland is getting from him overall and a vital component to the run game success compared to the struggles of Pittsburgh center Kendrick Green who is also questionable for the game. It will be interesting to see what the lineup for the Steelers offensive line is on Monday night.

The only position the Browns did not have a top ten player at was guard in the run block win rate, which I found surprising. Unsurprisingly though, no Steelers offensive lineman made any of the lists. Here’s the last offensive line list: 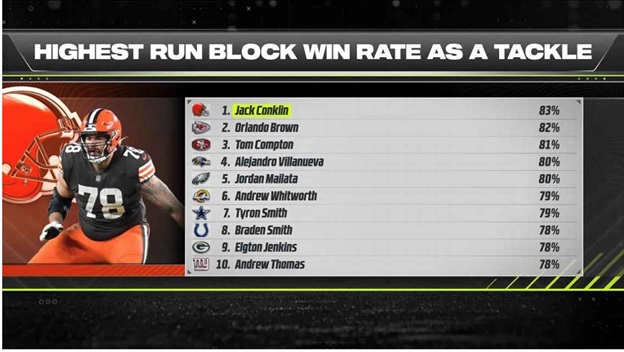 Tackle Jack Conklin is the top ranked tackle in run block win rate, but is on injured reserve and was replaced by James Hudson, hopefully something Pittsburgh linebacker T.J. Watt can capitalize on.

Who will win the battle of the trenches?

To wrap up, let’s look another big key for the game, the edge rushers with the same metrics as the offensive lines: 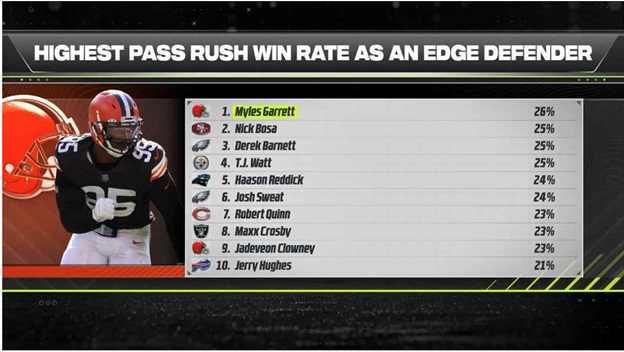 First on the list is Browns linebacker Myles Garrett, who is also tied for third in the league in sacks with 15! Last matchup he spent most of his time facing Steelers left tackle Dan Moore who struggled, so it will be interesting to see if the approach with Garrett is the same and if Moore fares better with more experience under his belt. Pittsburgh linebacker T.J. Watt is ranked fourth and the current NFL sack leader with 17.5! The Steelers will need another strong game from him as he had in Week 8, and expect this with Conklin out. 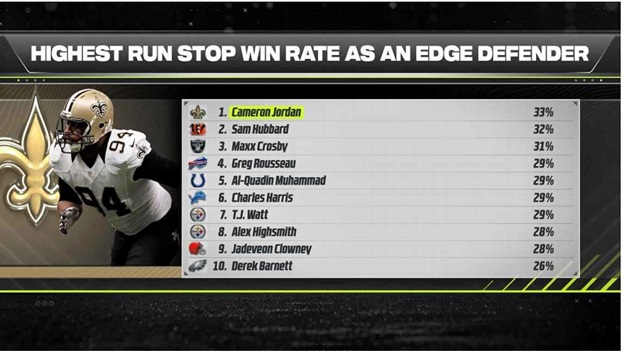 Both Watt and linebacker Alex Highsmith land on the list, ranking seventh and eighth in the NFL. It will be huge for them to step up in this matchup in the run game, hopefully with stronger interior line play compared to recent weeks. Cleveland linebacker Jadeveon Clowney ranks ninth and will likely face Steelers tackle Chukwuma Okorafor as we saw last matchup, and it will be interesting to see who wins the battle. Browns linebacker Anthony Walker leads the team in combined tackles with 97 and cornerback Denzel Ward has a team high with 10 passes defensed and three interceptions!

How do you think the defenses will perform? Will this be another low scoring affair?

Here is a link to my Week 8 Recap for reference to how the first matchup went earlier in the season.