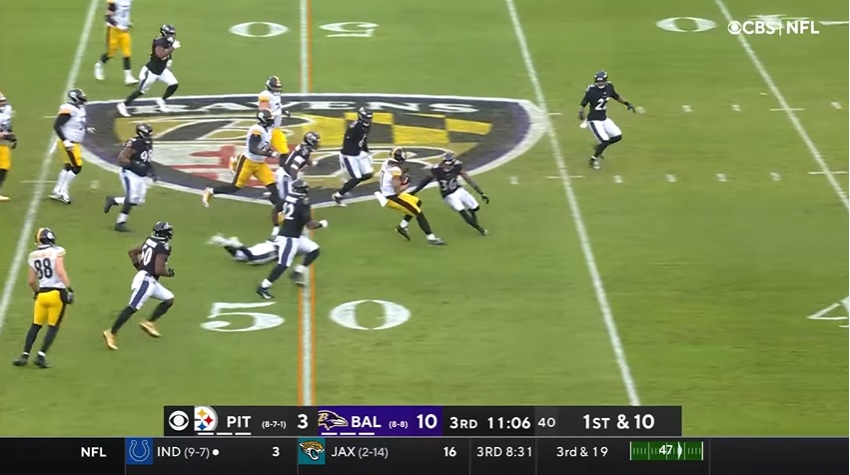 One more time this regular season. But not the last time of the year…which is the weirdest and sweetest part of it all.

– Pittsburgh Steelers won this one 16-13. In the Ben Roethlisberger era, 2004 to 2021, the Steelers and Ravens have played 18 games decided by three points or fewer.

Just sums up how tight this rivalry is.

– The Steelers have now won four straight regular season games over the Ravens, sweeping them in back-to-back years. That’s happened just once in history, joining the 1997-1998 seasons.

– With 33 yards, Chase Claypool led the Steelers in rushing Sunday. Since 2017, he’s just the second Steelers wide receiver to lead the team in rushing in a game, joining Ray-Ray McCloud in a 2019 win over the Eagles. McCloud had 63 yards that game, thanks to one big windback run.

– Ok, a less-fun stat. After allowing 249 yards on the ground to Baltimore, the Steelers have given up 200+ yards rushing in four games this season. That’s the second-most ever allowed in a year, only trailing the five given up in 1954. To put that in perspective, Chuck Noll was in his second year playing for the Cleveland Browns the last time Pittsburgh allowed four-plus games of 200+ yards rushing in a season.

– It’s rare for a stat to genuinely shock me. But this one did. Six different Steelers caught four-plus passes today. The last time six different Steelers caught four-plus passes in a game? You have to go all the way back to 2006, when the Steelers lost to the Broncos 31-10. That day Ben Roethlisberger hit four-plus times: Hines Ward (7), Willie Parker (7), Santonio Holmes (6), Najeh Davenport (5), Heath Miller (5), and Cedrick Wilson (4). An…interesting collection of names.

All six of the Steelers’ receivers Sunday against the Ravens made up Roethlisberger’s 30 completions. If they caught one, they caught at least four.

– T.J. Watt’s 72 sacks are the most by any Steeler in their first NINE seasons. Watt just finished his FIFTH season. He broke a tie with Jason Gildon with his record-tying sack Sunday.

At the pace he’s on, Watt will hold the Steelers’ franchise sack record roughly halfway through the 2022 season. He needs just nine to own the record outright.

– Terrell Edmunds and Minkah Fitzpatrick finish the season with the same amount of interceptions, two each. Bet you didn’t see that happening. I sure didn’t.

– Cam Heyward ends the season with nine pass deflections, the most by a Steeler since at least 1999, as far back as the stat tracks. The last defensive lineman with more pass deflections in a season than his nine came in 2017 when Cam Jordan had 11. Since 1999, the record is 16, held by J.J. Watt in 2012.

– It’s not as symmetrical as I would’ve liked but…

Both TDs were completed to the right side.

– One last Ben stat for some career perspective. He threw 44 passes tonight, a stat no one bats an eye about. It took him until his 32nd career start to throw 44+ attempts in a game. Which game was that? The 2006 loss to Broncos we referenced above in our “four-plus receptions” stat of the weird. All comes full circle.

– Not only did Chris Boswell’s third field goal win the game for the Steelers, it set a franchise record. His 36 made field goals are the most in a single season, breaking Boswell’s 2017 mark of 35.

By the way, that record-setting 36th field goal was from 36 yards out. That’s some good stats of the weird symmetry we’re all about.

– Najee Harris finishes the regular season with 381 touches. He did not fumble once. It’s a rookie record, beating out Saquon Barkley’s mark of 352.

It’s also the second-most touches in NFL history without a fumble, trailing only Gerald Riggs in 1985, who had a whopping 430 touches.