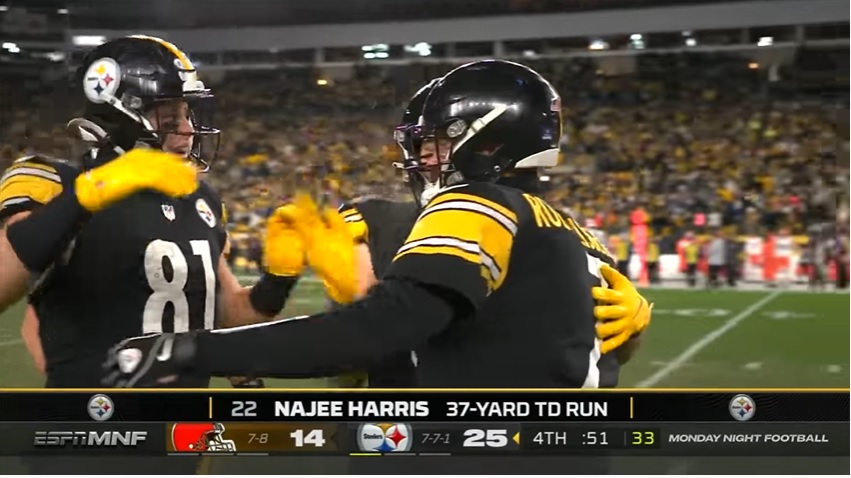 An emotional win. And it came with a lot of weird.

– The Pittsburgh Steelers’ defense is up to 52 sacks this season. They now have five straight seasons of 50+ sacks, tying an NFL record.

That was, by the way, Mike Tomlin’s first year with the Bucs.

– Ben Roethlisberger had just 123 yards passing on 46 attempts. It’s the fewest yards on 45+ attempts in NFL history, and it’s not even that close. Only one other QB has ever thrown 45+ attempts and been held to even under 150 yards. That was former Steeler Bruce Gradkowski, though he did it with Tampa Bay in a 2006 loss to the New York Giants.

Prior to Monday night, the fewest yards by a Steelers’ QB when attempting 45+ passes was 178, done by Mark Malone in 1985…also against the Browns.

Roethlisberger had never thrown for less than 262 yards when attempting 45+ passes prior to Monday’s game. So he threw for less than half of that against the Browns. Pretty crazy.

– Roethlisberger averaged just 2.7 YPA tonight, the lowest of any Steelers’ QB with 20+ attempts since Kordell Stewart in 1998. He went 11/35 for 82 yards in a shutout loss to the Miami Dolphins, one of those “bad Kordell” kind of games.

– Najee Harris’ 188 yards rushing not only broke Franco Harris’ single-season mark, but it broke the Steelers’ rookie record for rushing yards in a game. The mark was previously held by Bam Morris’ 146 set in 1994.

– Derek Watt recorded his first regular season first down in a Steelers uniform with a one-yard plunge in the first quarter on 4th and 1.

– Pittsburgh attempted two fourth downs in the first quarter of the game. The Steelers have never done that dating back to at least 1994, as far as PFR tracks play-by-play data.

– The Steelers ran for 190 yards against the Browns, the most yards rushing they’ve had in a game in over four years. Week 6 of 2017 against the Chiefs is the last time they’ve run for more, finishing that one with 194 yards.

– Diontae Johnson had 31 yards on 15 targets. That’s barely more than two yards per target. It’s the fewest yards by a player with 15+ targets since RB LaDainian Tomlinson had eight catches for 17 yards on 15 targets in a 2003 win over the then-Oakland Raiders.

Only one WR since 1992 (as far back as target data goes) has had 31 or fewer yards on 15+ targets. That was Cardinals’ WR Rob Moore, who also had 31 targets in a 1997 loss to the New Orleans Saints. Moore had four catches and not eight, so at least his yards per catch was higher.

– T.J. Watt recorded four sacks in a game for the first time in his career. Not too many “firsts” he hadn’t crossed off the list. He’s the first Steeler with four in a game since Joey Porter in 2001, which came in that ten-sack game I mentioned at the top. Since 1982, other Steelers with four sacks in a game include: Chad Brown, Jerrol Williams, and (crazy enough) Edmund Nelson. I look forward to seeing Watt eat ribs in the booth during preseason action 20 years from now.

– After 26 tackles in his last two games, Minkah Fitzpatrick had just four tackles against the Browns. Legitimately happy to see it.

– With nine, Cam Heyward leads the Steelers in pass deflections this season.

– And Ahkello Witherspoon’s three INTs lead the team. Like we all expected.

– Alex Highsmith had his first two-sack game in the NFL Monday and his first since he had 4.5 in a 2019 win over Old Dominion.

– Combined, the Browns and Steelers went 10-35 (28.6%) on third down. Pittsburgh was 5-18. That’s only happened to them once since 1991 when they went 5/18 against the New England Patriots. They somehow won that game too, 17-14, a game in which the Pats scored all their points in the first quarter, the Steelers scored all their points in the second quarter, and no one scored in the second half.

– Finally, Pittsburgh had lost the time of possession battle in six straight games. They won it Monday in a big way, 34:55 to 25:05.