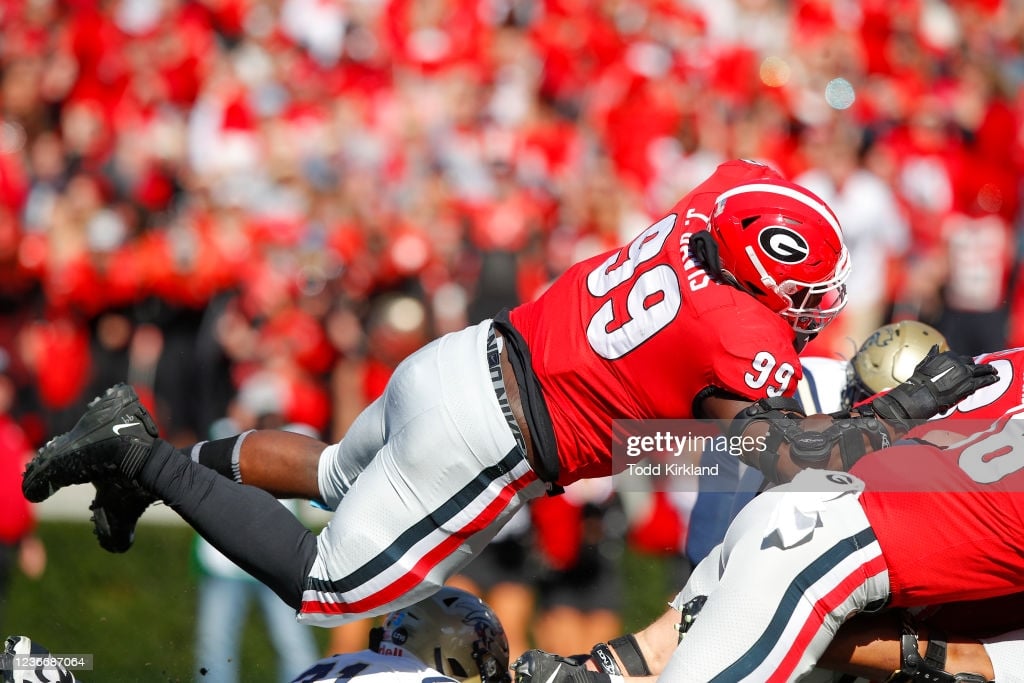 Following the final college football game of the year, we will be highlighting several college football prospects and their respective performances as well as how they could be viewed going forward into the 2022 NFL Draft, specifically by the Pittsburgh Steelers.

Cine may not have had the splash plays that several of his teammates had in their convincing win against the Crimson Tide Monday night, but the CFP thought enough of his performance to name him Defensive Player of the Game. Cine finished the game with seven total tackles (six solo) and displayed tremendous pursuit of the football, whether it be as a pass coverage defender or a strong safety filling the alley against the run. Cine is what teams are looking for in a strong safety type at the next level, having the aggressiveness and demeanor to play in the box as well as split zone/deep middle if called upon. His performance Monday certainly helped his draft stock should he decide to declare.

While the game started out as a slugfest in the first half with both teams exchanging field goals, Georgia came out in the second half and controlled the LOS on both sides of the football. Part of that success must be credited to Sayler and Shaffer, who headline the offensive line for the Dawgs. Georgia was far more stout up front than in their first meeting with the Tide, establishing the run down the stretch to wear down the Alabama defense while also keeping QB Stetson Bennett upright in the pocket. Sayler was asked to move from LT to RG in the middle of the game and did so seamlessly, playing more of what his likely position will be at the next level.

This exchange of Alabama defenders (Will Anderson included) is pretty darn impressive by Jamaree Salyer and Justin Shaffer. pic.twitter.com/1OJOgPE0z6

Davis has been highly-touted all season for being a disruptor up front for the Dawgs defense, routinely taking on double teams to allow their linebackers to roam free and fly to the football. While Davis anchored the defensive line against the run, there were also moments in this game where he generated a pass rush, specifically on that controversial call that initially was ruled a sack fumble returned for a TD, but was later deemed an incomplete pass. Should Davis convince teams that he can play all three downs as a competent interior pass rusher, expect his draft stock to soar.

Much like he has all season, Nakobe Dean was all over the place for the Georgia defense. His speed sideline-to-sideline kept Alabama from getting to the edge in the running game, and his pursuit and aggressiveness on his blitzes up the middle bottled up inside runs when he was able to evade blocks. Excelling as a pass rusher and coverage linebacker, Dean showcased the skill set, albeit being slightly undersized, today’s day-in-age LBs need at the NFL level to play all three downs. A great talent and even better football character, Dean is a strong bet to hear his name called on Day 1 of the 2022 NFL Draft.

TE misses the block but Nakobe Dean attacks and makes a good tackle. I just love his skillset. pic.twitter.com/CtMJCoAn7O

I must admit that I was late to the Channing Tindall fan club, but now I can fully say that I have jumped onto that moving train. Tindall is a physical freak when it comes to twitch and speed at the LB position, showing phenomenal run-and-chase ability in pursuit of the football as he closes ground in what seems to be an instant at times. He had one moment where his mis-read a coverage that Dean made up for, but after that he dialed in and made QB Bryce Young’s life difficult as a pass rusher. Tindall won’t get the same hype his teammate will, but his athletic traits and explosiveness make him a fine Day 2 pick that will be a great value for the team that takes him.

I have been up-and-down on Harris and his performance that last couple of seasons, recognizing the athletic talent and speed that he plays with, but questioning his instincts and ability to adequately cover backs and tight ends. However, Harris made quite the impact in Monday night’s game, tallying seven total tackles (five solo), three sacks, and a forced fumble. Harris is the quintessential downhill inside linebacker at the next level, being an effective blitzer from the middle in the twist/stunt game as well as having the speed and pursuit to run down ball carriers attempting to get to the corner. Questions remain on Harris working in coverage, but his ability to take on blocks and attack downhill likely cement his status as a Top-50 selection

Christian Harris starting it off early for the Bama defense 😤 pic.twitter.com/j2k7gIIukJ

The best part, watch the closing speed to the hole. He beats James Cook to the crease and delivers a blow!

His potential is through the roof! pic.twitter.com/K0rH1wNyAr

What are your thoughts on the names listed above and their potential fit in Pittsburgh? Do you think they could translate well to the league? What other names stood out Monday that the Steelers could have interest in come the spring? Please leave your thoughts in the comments section below and thanks again for reading!