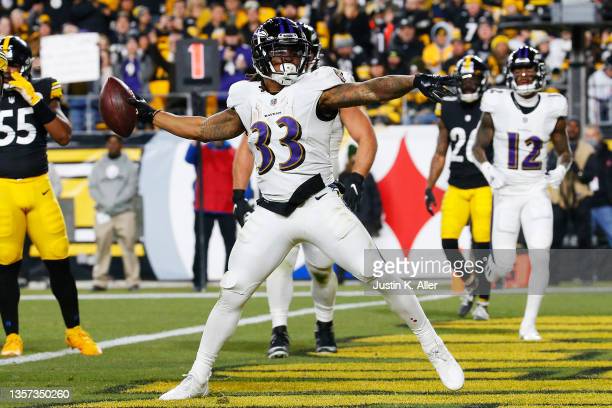 For the final time this regular season, an opposing scouting report. Here, focusing on the Baltimore Ravens’ offense for a second time.

What’s supposed to be the calling card of this team and to be fair, they’re still a good running team. But with all the injuries this season, running back and quarterback, they aren’t as effective and not nearly as explosive. For the year, they are as a team averaging 4.6 yards per carry, tied sixth most in football. They have 17 rushing scored, tied 9th most in the league.

QB Lamar Jackson still leads the team in carries with 133, followed closely by Devonta Freeman (128) and Latavius Murray with 103. Jackson is averaging 5.8 YPC. Backup QB Tyler Huntley, who could play Sunday, isn’t quite as Lamar’s level but not all that far off. In fact, while the sample size is smaller with just 35 carries, Huntley is averaging a higher YPC than Jackson’s 5.8 at 6.3.

But this run game isn’t nearly as big-play capable as it was a year ago. This season, their longest rush is just 35 yards by RB Ty’Son Williams, who isn’t even logging snaps for them anymore. So the Steelers’ longest run of the season set Monday night at 37 yards is longer than anything Baltimore has done this season. Kinda crazy. The Ravens have the fourth shortest “long” run of any team this year.

They still do a good job of getting good runs, fifth place with 59 gaining 10+ but they have just ten runs of 20+ yards. That’s tied for 12th and a far cry from a year ago, when they led the league with 31. So their big runs have been reduced by about two-thirds.

Schematically, things aren’t much different from where we left off a couple weeks ago previewing the first matchup. Lot of pistol, lot of heavy personnel with FB Patrick Ricard who plays a ton of snaps. In the first matchup against Pittsburgh, he played over half the snaps. However, the team placed him on IR yesterday so he will not play in the finale. Another blow to their run game.

Power out of pistol is a common formation and playcall for them.

And they’ll try to run QB power too with Huntley, especially in short-yardage situations, like this 4th and 1 pickup.

Some other offensive stats. They’re dead middle of the pack averaging 23.4 points per game. But they’ve been held at or under 22 points in seven of their last eight after scoring 23+ in six of their first eight. Injuries are clearly taking their toll on his group.

They have the 22nd ranked third down offense at 37.4% but they know how to finish drives, the fourth best red zone unit at 64.2%.

Not sure who will be starting Sunday, Jackson or Huntley. Jackson has an identical completion percentage from a year ago, 64.4% but his TD:INT ratio has worsened. 26 TDs to 9 INTs last year, 16 TDs to 13 INTs this year. His sack rate has also nearly jumped two points and overall, the Ravens have been sacked a league-high 54 times this season. Huntley has a high completion percentage, nearly 68%, but his YPA is 1.5 yards lower than Jackson’s, 7.5 to 6.0. So that speaks to shorter passes that leads to a higher completion rate.

The pass game runs through two guys: TE Mark Andrews and WR Hollywood Brown. On the year, Andrews has 99 catches for 1276 yards and nine touchdowns. Brown has 88 grabs for 981 yards and six scores (he does have three fumbles, something to keep in mind).

Combined, Andrews and Brown make up for 49.2% of the team’s receptions, 54.7% of the team’s yards, and 71.4% of the team’s touchdowns, 15 of 21. Of course, stopping those guys is easier said than done. Rookie Rashod Bateman has come on strong with 44 receptions in 11 games after missing the start of the year due to injury. Sammy Watkins has been a deep threat but his career may be coming to an end. He’s played just 17 offensive snaps the last two games and has zero targets.

With Huntley at quarterback last week, and this is reflected in his lower yards per attempt, I saw a lot of rhythm throws. Slants and boots. Examples of each.

Also saw some FIB plays from them, formation in boundary. Not something you see a lot but you force defenses to shift to the closed side of the field or potentially be outnumbered/out-leveraged if you cheat to the wide/open side. 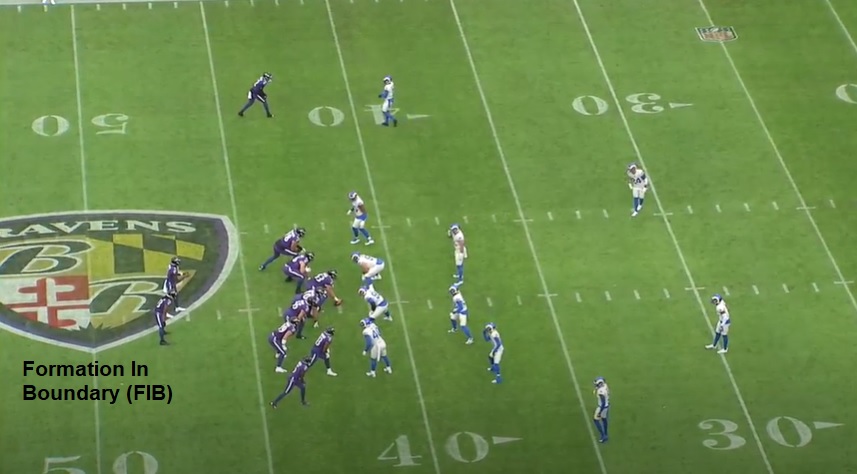 Quite fitting that the regular season finale and the final game of Ben Roethlisberger’s career comes against the Baltimore Ravens, who he also made his NFL debut against in 2004.

The Ravens are owed a lot of credit getting to 8-8 on the season so far under John Harbaugh, especially after all the injuries they were dealt early in the season, the number of players that landed on the Reserve/COVID-19 list, and the number of games they’ve been without star quarterback Lamar Jackson down the stretch.

Baltimore certainly seems to have found something in backup quarterback Tyler Huntley, who was undrafted out of Utah and sat on the practice squad and bench the last year before getting a crack this season.

Though Huntley isn’t in the same conversation of athlete as Jackson, Huntley has given the Ravens a real boost as a passer. That’s not to say Jackson isn’t a good passer because he most certainly is. The Ravens’ offense just looks…different, and better, through the air with Huntley, especially tight end Mark Andrews.

Working with Huntley since early December, Andrews has been on a tear, hauling in 35 passes for 465 yards and four touchdowns, becoming a true No. 1 receiving option, putting himself firmly in the discussion for the best tight end in football with Kansas City’s Travis Kelce and San Francisco’s George Kittle.

Andrews is dangerous after the catch, creates ample separation in his routes and really just has great overall hands.

He might not look like an athlete, but he can really move in space, as the Green Bay Packers found out the hard way early in the Week 15 matchup.

He is very good at the catch point and really can surprise defensive backs with his speed and stride in space.

This 44-yard catch-and-run set up the Ravens in great field position. Though they didn’t end up scoring, it was a sign of things to come for the star tight end, who hauled in 10 passes against the Packers for 136 yards and two touchdowns.

His first touchdown against the Packers was a thing of beauty, showing off his great hands, and was also a product of Huntley using his legs to extend the play and then firing a dart into the back of the end zone to Andrews for the score.

That’s a special throw on the move from Huntley, especially with that type of velocity and accuracy.

Andrews also had a ton of success in the Week 16 loss to the Cincinnati Bengals with Josh Johnson at the helm as Huntley was on the Reserve-COVID-19 list. I loved this little RPO wheel route the Ravens drew up early for Andrews, letting him work down the right sideline into space for the easy completion.

Offensive coordinator Greg Roman really does a nice job scheming things up and setting up defenses for later in the game with certain looks.

With Andrews stealing the show as the receiving option, Huntley has been the main rushing threat for the Ravens as of late as Devonta Freeman and Latavius Murray have not had much success on the ground overall, compared to earlier in the year.

That said, Freeman did rip off a 32-yard run against the Rams in Week 17 off of left tackle, setting up his blocks nicely on the outside zone, getting his foot into the ground and bursting north for the explosive run.

In his younger, healthier days, this might have been a touchdown with Freeman’s speed. The Ravens will take a 32-yard run any day though.

As for Huntley, he really does damage with his legs, similar to Jackson. No, Huntley won’t rip off the 50 yarders that Jackson is known for, but he’s really good at taking what’s there, remaining poised and methodically moving the offense down the field.

The Steelers have struggled with mobile quarterbacks using their legs when looks aren’t there, so keep an eye on Huntley. The Ravens probably should have studied the Chargers’ game closely with Justin Herbert’s success on the ground.

Rush lane integrity will be especially important on Sunday in Baltimore, specifically in the red zone.

Aside from Huntley and Andrews, the Ravens still have a ton of talent offensively.

Marquise Brown is still a jitterbug in space and has really thrived in more of a possession-style role with Huntley under center. He’s consistently caught the football and moved the chains in recent weeks, as has rookie Rashad Bateman.

Huntley really seems to trust Bateman, especially on possession downs when defenses try to take away Andrews, so he should be a focal point on Sunday.

Slot receiver Devin Duvernay continues to be the jack of all trades for the Ravens.

He doesn’t have much rapport with Huntley as a receiver, but the Ravens still try to get him the football in space on screens, end arounds and jet sweeps.

Up front, the Ravens have had a number of players in the lineup, but the group still plays relatively well. Baltimore had real struggles on Sunday against the Rams’ vaunted front, so there could be a mismatch for the Steelers to exploit there, especially inside.

Here’s how I expect the Ravens to line up on Sunday, left to right:

Villanueva has been relatively steady for the Ravens on the left side, while Bozeman has played some really good football inside. That said, Aaron Donald, Greg Gaines and A’Shawn Robinson gave him fits Sunday.

The Steelers should be able to create a ton of pressure on Huntley in this one. Staying in rush lanes and keeping him hemmed into the pocket will do wonders.

On special teams there’s simply not much to say about the Ravens that hasn’t already been said.

Justin Tucker is the best kicker in football and is unfazed by anything. Punter Sam Koch continues to punt at a ridiculously high level. The Ravens are just so good on special teams, especially under Harbaugh.

That said, the Packers and Rams both nearly blocked a punt in their wins, so maybe Danny Smith can dial up one more punt block on Sunday to help the Steelers win.