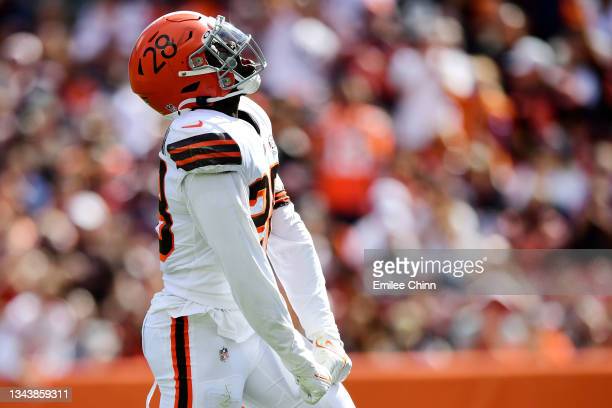 The Browns’ run defense ranks top ten in the league, allowing 4.1 YPC, officially eighth in football. They’re also top ten in touchdowns allowed, just 12 of them, tied 7th best in football. As we noted before, this can be a hybrid front with ends playing up and down but overall, they are a 4-3 defense.

Their leading tackler is linebacker Anthony Walker with 97 of them. Rookie Jeremiah Owusu-Koramoah is second on the team with 67 tackles, playing good ball for them his first year. He dealt with an illness this week but should be good to go for Monday night. Myles Garrett has 16 tackles for loss. No other Brown has double-digits.

From a run defense standpoint, and Tom may talk about this more below, the guy to attack is #94 Porter Gustin. He’s playing more after Takk McKinley’s injury, logging 66% of the defensive snaps each of the last two weeks. He’s not nearly as athletic as their other ends and struggles to make plays on the ball in space. Green Bay exploited and attacked him last week with the perimeter run game.

Beyond that, the Steelers just have to win their battles and matchups and play with better technique. Eliminate penalties, get Najee Harris downhill, and don’t beat yourselves. That’s really all that needs to be said about the state of Pittsburgh’s run game right now.

Some other defensive stats. They’re allowing 21.9 points per game, 17th in the league. They’ve allowed no more than 24 points in their last five so their defense is playing much more competitive ball than earlier in the year, keeping them in games as their offense has struggled. Their situational football stats aren’t very good, 21st on third down (40.6%) and 28th in the red zone (68.1%).

Health has been an issue here with virtually their entire secondary dealing with injuries (only two DBs have started 14+ games and both have started exactly 14) but they’re getting healthy for the stretch run. Their numbers still look good too. A 6.9 YPA, tied tenth best in the league, with 37 sacks (also tied tenth) in large part things to Myles Garrett. He has 15 sacks, accounting for over 40% of the team’s total while Clowney has five sacks. They are getting pressure from a good number of people and they will send everyone. Their DBs have a total of five sacks, even though their blitz rate is pretty low, 23rd at 21.8%.

The defense has forced 18 turnovers this season, slightly below average at 19th in the league. 12 of those have been interceptions by six different players. Safety John Johnson and CB Denzel Ward are tied for the team lead with three apiece.

Good mix of man and zone. See more one-high and man coverage looks against two-back and heavier personnel but they mix things up well. We’ve spent a lot of time talking about low red zone calls and how different teams will go man or zone heavy. The Browns are more of the latter. I see them play two-deep zone inside the ten more often, though they did show a Cover 0 zero look at the nine on third and goal too. That came on a third down suggesting they’ll bring heat on those “money down” type of looks.

Blitz-wise, the numbers don’t suggest a heavy amount of it but you will see some obvious overload looks that pretty clearly tell you there’s a twist or game being run. Like this picture where you see three defensive linemen aligned to one side of the line. They’re not all rushing their gap or else they will be short a gap the otherside and they’ll all just run into each other and clog up lanes. 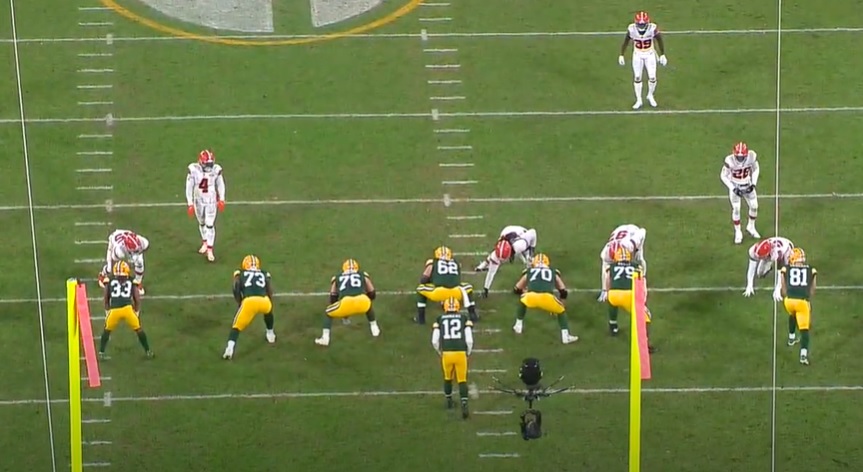 Facing a division opponent is always an important game but this one has possible playoff implications for both teams. Add in the fact that this could be Ben Roethlisberger’s last home game and the intrigue rises even more. Cleveland has been dealing with a lot of players coming on and off the Covid list but the defense looks to be pretty much at full strength. Let’s take a look at the defense.

Malik Jackson (97) is the veteran presence in the middle and has good play strength. He gets off at the snap well, has a good motor and is strong against double team blocks. As a pass rusher he uses power rushes and is used on stunts and while not a big sack getter he gets in passing lanes having four pass breakups. Malik McDowell (58) plays with aggressiveness and quickness to time the snap and disrupt quickly. He gets good push as a straight line rusher and will give an extra shove on plays to try to instigate opponents.

The reserves include Jordan Elliott (96) a three technique with good quickness and agility. He pursues the ball well in the run game and can shed blocks and has active hands when rushing the passer. Sheldon Day (92) has played sporadically throughout the season but has ten tackles in the last two weeks. He uses solid hand placement, pad level and anchor to make plays against the run. He’ll mix up his pass rush to include stabs, rips and swim moves. Rookie Tommy Togiai (93) rounds out the group and he’s a stout two gapping defender with good play strength and pad level along with solid lateral agility and anchor.

Here Day (92) is inside the right guard will show off his athleticism to swim over the guard and make the tackle. Then he is lined up over the center, reads the play quickly and shows speed down the LOS to make the tackle near the sideline.

Potential Defensive Player of the Year Myles Garrett (95) has been battling a groin injury. He’s a premier pass rusher using quickness and power to keep blockers off balance and can win with speed, power or inside spin moves. He has almost twice as many quarterback hits as the next guy on the team. And that next guy in Jadeveon Clowney (90) he has very good length and lateral agility and will shift inside on passing downs. He is able to get depth quickly to put pressure on the tackles and likes to use a jump into B gaps to pressure from the inside.

Behind them this group includes Ifeadi Odenigbo (57) who uses good form to set the edge versus the run and uses good quickness to get off the ball quickly. He doesn’t have as much play strength at the other defensive ends but he has some bend on the edge and is tough to handle when looping inside on stunts. Porter Gustin (94) is a high motor player with solid strength and adequate snap quickness. He is a solid run defender pursues well and his pass rushing attempts are usually power rushes.

Odenigbo (57) displays his quickness and athleticism to loop inside and get the pressure.

The Browns have six inside linebackers and we’ll probably see them all. Anthony Walker (4) is the MIKE linebacker and leads the team in tackles by a bunch. He processes well, pursues with speed and solid angles and is a strong tackler. He reads screens well and has good acceleration and awareness in Zone coverage. Sione Takitaki (44) is the SAM linebacker and plays an aggressive downhill style. He has speed and athleticism to chase all over the field and can set the edge as well. Rookie Jeremiah Owusu-Koramoah (28) missed the first Steeler game. He is the WILL linebacker and is twitched up with very good athleticism and processes plays well. He avoids blocks with agility, is a strong tackler, will be used to blitz and is solid in coverage. He accelerates very quickly on plays inside and outside.

Jacob Phillips (50) backs up the Mike. He has good athleticism and is an aggressive blitzer. He is a solid processor and attacks downhill quickly. Malcolm Smith (56) is veteran depth at the SAM position. He plays downhill and uses his hands well when taking on blocks. What he lacks in athleticism he makes up for with smarts and technique. Mack Wilson (51) backs up the WILL but can play any of the spots. He diagnoses plays well and is aggressive getting into gaps. He is solid shedding blockers and plays to the whistle.

Owusu-Koramoah (28) playing in nickel will play under control and duck under the blocker to make the quick tackle.

Denzel Ward (21) still leads this group and is effective in all coverages. He has click and close ability to break on the receiver and is aggressive in his attempts to break up the ball. He reads route combinations well and is a good tackler in space and supporting the run. Greg Newsome II (20) is expected back after missing two games with a concussion and then an additional week on the Covid list. He has performed well in his rookie season. He has good acceleration in Zone coverage to close on the ball and is very good in Man coverage with good ball skills. He has seven pass breakups and plays with a high level of confidence.

Greedy Williams (26) has been filling in for Newsome and has good speed and length and does a solid job playing in phase in coverage but will be late getting his head around on deep balls. He has good ball skills with two interceptions and nine pass breakups. Troy Hill (23) is a nickel corner who supports the run well. He has solid size, is a solid tackler as well as in Zone coverage. They will also use him to blitz from the slot.

Ward (21) at the top of the screen shows his stickiness in Man coverage and makes a quick tackle to break up the pass.

The safeties are a strong group. Ronnie Harrison Jr (33) is the strong safety and a physical tackler. He can play as a deep safety or in the box. Can cover tight ends or play a linebacker in dime and has good ball skills. John Johnson III (43) has versatility and is a very good processor. He can play the single high and has good range. He will also play in the box and is a willing participant in the run game being a strong tackler and willing to fill gaps.

Grant Delpit (22) has some spot starts and will play as the split safety in dime. He has good size and length, will be used to blitz and gets downhill quickly to show his physicality versus the run. M.J. Stewart (36) can play safety or as a slot corner. He his highly competitive and plays with good physicality. He is solid in Man coverage but can have trouble if you match your best route runner against him. Richard LeCounte III (39) is best playing on the back end and not in Man coverage. He is solid supporting the run and a good understanding of route combinations.

Stewart (36) is playing over the near side tight end and will use his hands well to keep the blocker off of him and make a tackle.