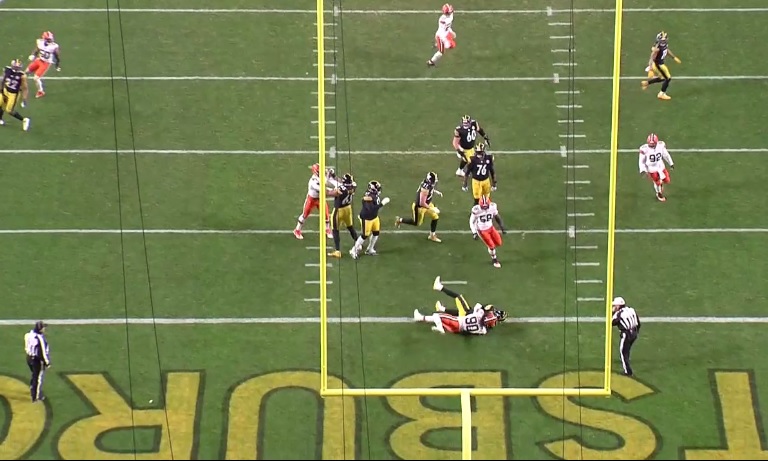 Breaking down the pair of sacks the Pittsburgh Steelers allowed in Monday night’s Week 17 win over the Cleveland Browns.

Again, the Steelers think they can be effective with play action. And again, they prove they can’t. Max protection here lined up to take a deep shot. But it never gets off the ground.

Eyes on RG Trai Turner. Not sure what’s going on here. He fires off the ball with low-hat, unlike the rest of his linemen who all come off high-hat in a pass set. Turner is heavily leaning forward here and doesn’t pick up anyone, not even doubling the 1T with Kendrick Green. The Browns are running a game here with 90 and 44, Clowney (#90) slanting through the B gap while the LB has edge contain.

So Okorafor picks up the LB while Turner should have Clowney. But he doesn’t and just looks lost on the play, almost to the point where you wonder if there was miscommunication and he thought the Steelers were running a different play, probably an actual run. Clowney is free and – for a third time in three games – Roethlisberger is dead to rights before he can really even look downfield.

But I’m not sure what the Steelers were trying to accomplish off play action. They are facing Cover 1, but the CB to the bottom is in a man-turn, so he isn’t even looking at the ball. Play action isn’t going to get him to bite. The CB to the top is playing off and is reading through the backfield, but the safety is shaded that way as help over the top. With both WRs running vertical and not trying to beat leverage, there’s nothing even downfield aside from throwing up a 50/50 ball and hoping for the best. Which can be done without play action. 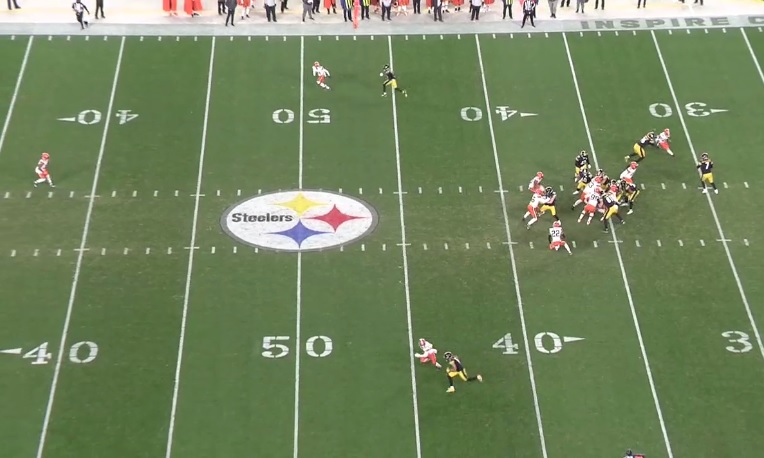 I don’t like this play call for a lot of reasons, and can’t figure out why Matt Canada thinks play action is still a useful tool for this offense. But end of the day, Turner blew his job, and I put it on him.

Second one of the day. Eyes on RT Chukwuma Okorafor. Just gets beat to the inside by Clowney here, who has a clear path to the quarterback, easily bringing Roethlisberger down.

Clowney wins by knocking down Okorafor’s hands as he shoots his hands, and Okorafor can’t seal him down to the inside. Pretty quick and easy win.

The only question is whether or not Okorafor thought he was going to have help on the line slide with Trai Turner coming down to protect the inside. But Turner ended up helping out on the DT instead, seeing Clowney late but unable to help. That’s the only thing that makes me question what happened here.

But we have pointed out Okorafor is most vulnerable to losing to inside rushes and counters. Here’s what we wrote back in October:

“Simply put, Okorafor did well when asked to seal the edge against outside rushes. He struggled the most when forced to mirror inside moves and counters.”

Some case to be made here, and I wish I knew if Okorafor thought he had help, but I’m going to put the blame on #76 here.