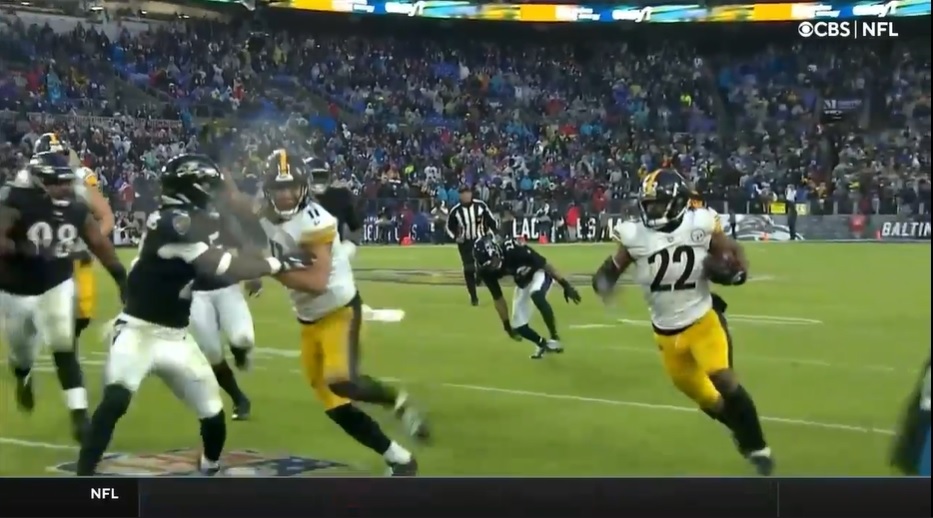 Harris got touches on the first three plays of the game but on the last he hyperextend his right arm on a reception on an out route and had to leave the game.  He did return late in the third quarter clearly favoring the arm but made two huge plays late in the game. There weren’t many running holes but his final run showed his creativity when the middle was clogged and good acceleration to get around the outside to see up the game winning score.

His toughness was clearly on display once he returned.  He managed to catch three more passes.  The first two included a flat route that didn’t gain much and a dump off on a scramble that he added thirteen yards after the catch. His final catch was a check release and he made a one handed catch (with the good arm) on a throw high and behind him and then juked a linebacker allowing him to gain 12 big yards. He had two very nice blitz pickups and another good block on an end around.

He played just twelve snaps in the first half but he still was able to make his mark on the game in the second half. His route tree was diverse but his receptions all came on curl, flat and out routes. He made several nice adjustments on his receptions and did well after the catch. I counted 27 yards after the reception making some miss and driving through other would be tacklers.  His big catch came in overtime on an out route versus tight coverage to move the chains.  He converted first downs on half of his receptions. He did show better physicality in his routes to create space which is something he hasn’t really been doing.

His overall blocking was better in this game. He set up in good position with good pad level. He just needs to sustain to the whistle. He did execute several different types of blocks. He was good in space on screens and on an end around.  He uses a basketball block or boxed out a defender on the backside of a running play. In the passing game he had one pass blocking rep and uses a good punch but the defender didn’t rush and he had a solid chip on an edge rusher before releasing into his route.

Kendrick Green (Round 3) – Active but did not play

Loudermilk played his least number of snaps since week thirteen also against Baltimore. He was used primary as a 3/4i technique but also played the 1 tech. His tackle came in his usual fashion playing a two gap, stack and shed type of play. Against the run he had some trouble holding his ground and was even pancaked by Alejandro Villanueva. And Big All, being the man he is, helped him back up. He got walled inside on a combo block opening the lane for the long touchdown run.

Against the pass he had several contain rushes not really trying to move the pocket but to control the quarterback’s path. On the other rushes he tried a variety of moves including a spin, bull rush and a double swipe. He was again slow at the snap and until he quickens he will continue to struggle versus the pass.

Playing against a run heavy offense Norwood saw his fewest snaps since week eight. All of his snaps came in the dime defense where he was used near the line of scrimmage before getting into his drops.  All of his reps were in Zone coverage. Some were a traditional Zone and others were a matchup Zone. He displayed very good awareness of the receivers in his area and understanding of the routes.  He also is very good at always communicating with other defensive backs to notify coverages or routes coming their way. His lone tackle came on kick coverage.

Harvin was back in this week and overall it was below average.  His punts didn’t travel far but three ended up at or inside the twenty and the Ravens had zero punt return yards.

His first punt travelled just 36 yards to be fair caught at the twenty. The second was nearly identical travelling 34 yards and also being fair caught at the twenty. Next was a 26 yard punt that was a little deeper to the 16. His best punt came in the second quarter and travelled 49 yards and was downed by a teammate. He kicked another out of bounds which has been common late in the season and was deep in his own end. It was just 33 yards and went out at the 40. He had a solid punt in the fourth quarter for 46 yards and no gain. And the last was a 38 yard and had no return.