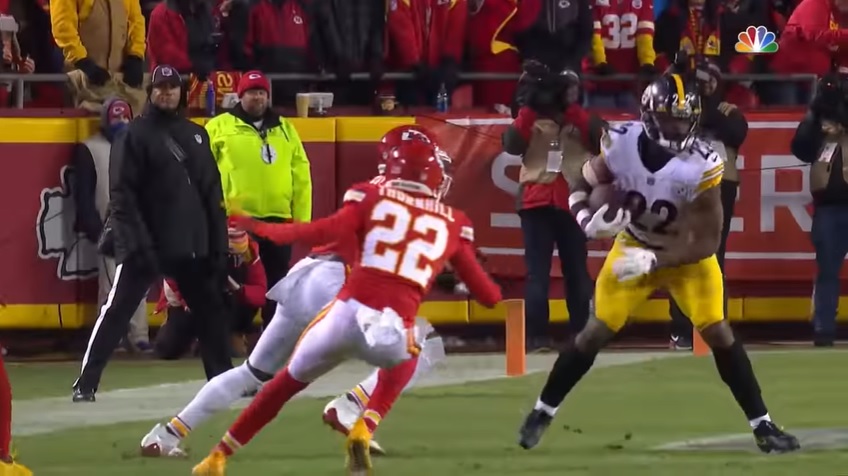 The Wild Card game was not kind to Harris. There were no holes to run through, his receptions went nowhere and he had his first and only fumble of the season. They used a heavier rotation at running back and Harris only was in for two plays in the fourth quarter. The running was tough from the get-go. He had someone in his face at the line of scrimmage on his first two runs and it didn’t improve from there. His two best runs came in 13 personnel where the plays were just pile pushers.

His receptions were both on swing passes and despite getting about five yards after each reception, he was so far behind the line of scrimmage when he caught it that it didn’t result in positive yards. The second reception yielded the fumble. His pass protection awareness was good but he needs to work on his pad level to not get driven back.

Other than the game he left with the concussion, he played his fewest snaps since week three in this game. He was primarily a check down option in this game with most of his routes coming in the curl and flat areas with very few intermediate/deep routes and there looked to be a miscommunication on the first target. His first reception was on a short out breaking route, followed by two in the flat and a slant. The slant displayed good awareness as he was the hot route for the quarterback. Twenty-one of his yards came after the catch.

As a run blocker, a lot of what he was doing was passive and he even got pushed back on a couple plays. He did have one really nice block leading through the hole. An off season in the NFL weight room could do him wonders but good things lie ahead for him.

Here is that nice block by Freiermuth (88). This may have been his most aggressive and effective block inside all season.

Dressed but did not play in the Wild Card game

Moore had himself a really good season overall and that continued in this game. In the run game he did an excellent job on Zone blocks to wall off the edge blocker to the outside. He got good push on double team and combo blocks before continuing to drive as the post block. He should continue to improve within the running scheme.

As a pass blocker there was a lot of good with a few bad reps. He was able to get good depth in his sets and displayed good awareness and balance dealing with twists and stunts. He did get pushed back on a couple power rushes but improved through the season. He executed a solid cut block on the edge and was solid pushing pass rushers up the arc. He did allow a pressure when the edge player timed the snap perfectly and he ended up holding the player to protect the quarterback from a big hit. He was also beat late in the game for a coverage sack against speed around the edge.

Loudermilk continued to get his usual reps and was used from the 1 technique to the 4i technique. Overall, he was a little slow at the snap and was popping up out his stance. You want him to stay lower and fire out. His effort was impressive as usual and he is best as a two gap defender able to stand up and shed blockers. His first tackle was on a run up the middle in the first quarter. He second was defending in the red zone and he showed very good play strength to torque the guard out of the way to make the stop. The final tackle came on a late third quarter run.

His pass rushes were ineffective but there were some positive moments. He did get some push trying a couple power rushes and he displayed improvement in his hand usage with some nice swipes. Pass rushing is an area where he really needs to improve.

All of Norwood’s defensive snaps came in dime personnel and they were all with him lined up essentially as a linebacker, sometimes showing blitz, before dropping back into coverage. The majority of his coverage reps were in Man coverage with the majority on Travis Kelce and others on wide receivers. He made a splash early with two pass breakup in the first quarter. One play happened versus Kelce and the other a play where he chased the receiver across most of the field before disallowing the catch.

His first tackle came from Zone coverage and hustling to the ball and the second came in coverage chasing a receiver to the sideline from the middle of the field to shove him out of bounds. He had a very good season for and looks to be a big part of the defense going forward.

The two pass breakups by Norwood (21) were very nice plays. On both he’ll start by lurking around the line of scrimmage. The first is a diving stop in from of Kelce and the second he chases the receiver thirty yards across the field to make the play

For all the ups and downs Harvin had this year on the field he may have saved his best performance for the playoffs. His hang time seemed to be better in this game and his yardage average was for the game was his second best of the season.

The first punt travelled 54 yards but yielded a big return. Punt number two travelled two yards farther with a lone yard on the return. Punt three was in the same range at 55 yards but the coverage team allowed a 48 yard return. Next was a 42 yard punt that was downed by the long snapper. Punt number five was a 47 yard kick out of bounds. Possibly trying to keep it away from the returner after two good returns. The last two travelled 41 (fair catch) and 53 with an eight yard return. A good way for him to finish the season.