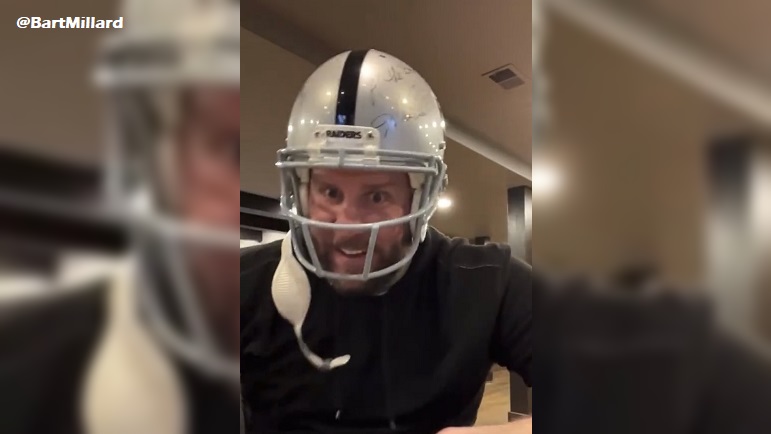 The Steelers headed into Sunday with just a 10% chance to make the playoffs. After a few things went their way, they are now preparing for the Chiefs this weekend in the Wild Card round.

The Chargers-Raiders Sunday Night Football matchup came down to the wire and nearly ended the Steelers’ playoff hopes. Ben Roethlisberger did indeed watch the game and just like any other fan, began losing hope as the game went on.

”I wish I would’ve went to bed instead of staying up and watching [with the] stress,” Roethlisberger said Wednesday via the team’s website. “What a crazy game and crazy ending. You know you go into the evening excited about getting in and then your hopes start to dwindle there for a little while. Then the last drive, you really think they’re gonna play for the tie.”

The tie would’ve obviously sent the Steelers packing and the Chargers and Raiders to the playoffs. Josh Jacobs and Daniel Carlson had other plans, beating the Chargers on a last-second field goal.

Shortly after the game, a video of Roethlisberger watching the game went viral, with him even throwing on a Raiders helmet. Some joked it was Antonio Brown’s Raiders helmet, but he mentioned just where it came from.

I promise you, Sunday night was the only time you will ever see Ben Roethlisberger do this. pic.twitter.com/7LQhknxn2q

“Yeah that’s a signed helmet from Shane Lechler and Sebastian Janikowski that I had. I put it on just for fun for the last drive just to tease my guy that we were FaceTiming with. As you can see, it didn’t fit very well.”

Lechler and Janikowski remain Raider legends to this day. Janikowski is the team’s second-best kicker in their history according to field goal percentages, just behind current kicker Daniel Carlson. Lechler was one of the best punters of the 2010s, if not the best.

It’s a side of Roethlisberger that we don’t get to see often. You can see just how much the playoffs meant for Roethlisberger, with it being his last season.