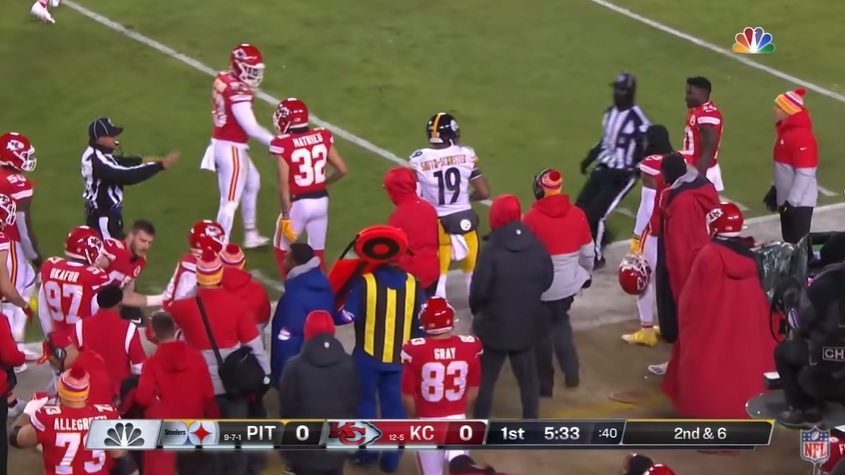 JuJu Smith-Schuster has remained adamant about staying in Pittsburgh. But one recent report is painting a different picture, saying that Smith-Schuster is open to signing with the Kansas City Chiefs this offseason, a team that courted him a year ago.

According to Pro Football Network’s Aaron Wilson, Smith-Schuster is open to the idea of playing in Arrowhead next season. Here’s what PFN’s report had to say:

“Now that quarterback Ben Roethlisberger has retired, Smith-Schuster is interested in potentially joining the Chiefs again. It’s no secret in NFL circles with multiple league sources saying Smith-Schuster hopes to join the Chiefs as a free agent and has expressed that desire.”

The Chiefs were one of three finalists to sign him a year ago along with the Steelers and Baltimore Ravens. Kansas City even offered more money, an incentive-laden deal, but Smith-Schuster took less money to return to Pittsburgh, citing a desire to play with Roethlisberger. Roethlisberger is now headed for retirement and if this report is to be believed, Smith-Schuster is again weighing his options.

Playing for Kansas City means playing for one of the league’s top offenses and a perennial Super Bowl contender. Right now, Pittsburgh can’t offer either of those things.

Publicly, Smith-Schuster has expressed a desire to remain in Pittsburgh, preferably on a long-term deal.

But in the same interview, he noted the Steelers’ next quarterback will play a role in his decision. Whether it’s Mason Rudolph, Dwayne Haskins, or someone else, nothing is going to compete with the idea of playing for Patrick Mahomes.

The tricky part about Smith-Schuster’s looming free agency is his market. He was limited to just five regular season games in 2021 due to a shoulder injury. The salary cap has gone up compared to the cap-crunch of a year ago, but it’s hard to see him pulling in more money after such a quiet, injury-marred season. Smith-Schuster was met by a cooler-than-expected market last year, and he may have to settle for another one-year, prove-it deal to again try to rebuild his value.

For the Steelers, he’s one of two pending free agents at the position. James Washington is coming off the final year of his rookie contract and is expected to sign elsewhere this offseason.