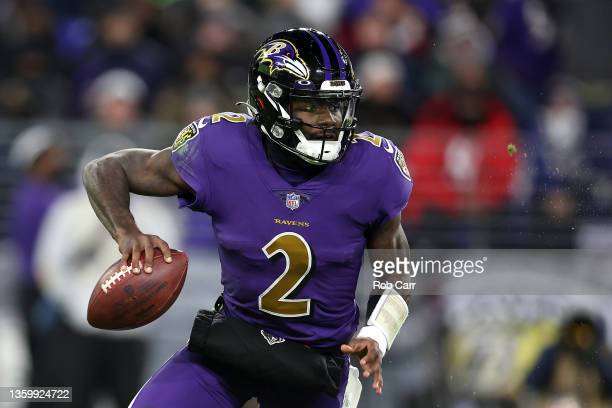 Though it comes as no surprise, the Baltimore Ravens will start Tyler Huntley at quarterback in their Week 18 regular season finale against the Pittsburgh Steelers. Head coach John Harbaugh confirmed the news minutes ago.

Lamar Jackson has yet to practice this week due to an ankle sprain suffered nearly a month ago in the Ravens’ Week 14 loss to the Cleveland Browns. With him out for Sunday’s game, his 2021 season will end on a low note. Jackson didn’t have the season many hoped or expected, throwing just three more touchdowns (16) than interceptions (13) and struggling mightily at times, like his four interception disaster in the team’s first meeting against the Browns.

Huntley has played well in relief of Jackson. Though he isn’t quite the athlete, the run game hasn’t changed much, and Huntley has proven to be a threat with his legs. In fact, his yards per carry is higher than Jackson’s, 6.3 versus 5.8. The team has evolved into a more rhythmic and timing based offense, more likely to throw slants and curls than take vertical shots. As a passer, Huntley is completing 67.5% of his passes with three touchdowns to two interceptions across six appearances (three starts).

This will be the Steelers first time facing Huntley. Huntley entered the league as a UDFA out of Utah in 2020 and climbed the ladder with Baltimore, turning into a very good backup for Jackson heading into 2022.

This is a must-win game for both teams, who will then need plenty of help to make the postseason. For Pittsburgh, they’ll need to beat the Ravens, have the Jaguars upset the Colts, and avoid a Chargers/Raiders tie. For Baltimore, well, there’s a lot that needs to occur.

Baltimore is looking to break a three-game losing streak to Pittsburgh. They haven’t beaten the Steelers since the 2019 regular season finale, a depressing, rainy game that the Ravens handedly won 28-10.