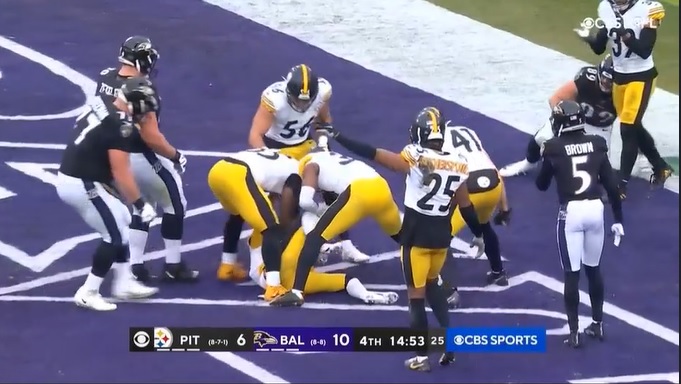 Somehow, some way, this Pittsburgh Steelers’ football team finds a way to live to fight another day.

Facing the daunting task of not only winning in Baltimore against the rival Ravens on Sunday afternoon, but also needing a seemingly-improbable Jacksonville Jaguars’ win over the red-hot Indianapolis Colts, the Steelers pulled out an ugly 16-13 overtime win in the rain over the Ravens and watched the Jaguars absolutely dog walk the Colts, all but clinching a spot in the AFC playoffs.

Sunday’s showing inside M&T Bank Stadium was a classic AFC North battle between the Steelers and Ravens, featuring a lot of ugliness, good defense overall, and last-minute heroics.

Throughout Sunday’s game, Ben Roethlisberger — in his final game in Baltimore — was rather rough. But per usual with the Hall of Fame quarterback, he turned it on late, sparking the Steelers’ offense down the stretch, resulting in a much-needed win. Defensively, T.J. Watt tied the NFL’s single-season sacks record, Cameron Sutton made a pivotal interception in the end zone and Minkah Fitzpatrick broke up a monumental pass intended for Marquise Brown that likely saved the Steelers the game.

Let’s get to some grades and get set for the playoffs.

It was quite fitting that Ben Roethlisberger went out in style in Baltimore, but throughout the game he was really, really rough overall.

Through the first three quarters, Roethlisberger was just 11-for-19 for 95 yards and an ugly interception to Ravens’ safety Geno Stone on an ugly broken play. In classic Roethlisberger fashion though, the future Hall of Famer rebounded in a big, big way, completing 19-of-25 passes for 149 yards and a touchdown to Chase Claypool, giving the Steelers the late lead.

After that, he then led the Steelers on the game-winning field goal drive in overtime, converting a 4th and 8 to Ray-Ray McCloud over the middle to pick up the win and all but clinch a playoff spot.

It doesn’t have to be pretty all the time, but man does Roethlisberger have some magical moments remaining. It would be nice to get that type of performance more consistently throughout the game, rather than waiting for the cardiac kids moment every week.

With Steelers’ rookie running back Najee Harris missing much of the game after hurting his arm/elbow early on, the Steelers’ run game was mostly non-existent, even against the top run defense in football.

As Harris received treatment on the sideline, the Steelers turned to Benny Snell Jr. Fittingly, Snell Jr. couldn’t do much of anything against a stout Ravens’ defense, finishing with just 22 yards on 12 carries, including a long of 9 yards. He did have a terrific run and catch with a mean stiff-arm wiped out by a penalty, but overall he was just simply a body out there. He also had a killer false start on fourth and one in the first half that forced the Steelers to settle for a field goal, rather than go for it in the red zone.

Kalen Ballage received just one carry on the day and is simply an afterthought, even when Harris was injured.

Fortunately for the Steelers, Harris came back late in the game and made two pivotal plays in overtime, snaring a pass with one hand and converting the catch for a first down out of the backfield, saving a possible pick-6, and then later ripping off a 15-yard run off left tackle to pick up the first down and put Chris Boswell in position for the game-winning kick.

Hopefully the arm injury is nothing too serious for the rookie and he’s ready to go on Sunday night against the Kansas City Chiefs on Super Wild Card Weekend.

Once again, issues catching the football popped up at the worst possible times for Diontae Johnson and Ray-Ray McCloud. Fortunately it didn’t cost the Steelers this week, but that simply has to get cleaned up as both receivers dropped key passes on the eventual game-winning drive which forced the Steelers to convert a 4th and 8 to keep their season alive.

Despite some drops, McCloud was really strong as a receiver, finishing with four catches for 37 yards, including the 4th and 8 conversion and a huge 20-yard catch over the middle that caused him to take a big shot for the second straight week. He held on again though and moved the chains.

Johnson finished with seven catches for 51 yards and absolutely cooked Jimmy Smith at times with his change of direction skills in his route running. The yards aren’t there at the moment, but if he cleans up some of the drops issues at the moment, a big game is right around the corner.

Credit to Chase Claypool in this one for bouncing back in a big way. He ran crisp routes, did a great job catching the football and made plays when the Steelers needed him to, finishing with five catches for 37 yards and the go-ahead 6-yard score in the fourth quarter off of a slant route. He also added a much-needed 33 yards on three carries in the win.

If he can find his game mentally this week, look out.

It’s pretty remarkable what happens in this offense when the tight ends are utilized through the air.

Pat Freiermuth made a terrific catch down the stretch on an absurd throw from Roethlisberger into a tight window. Though he later failed to convert a first down on a short throw forcing the Steelers to punt, the rookie had a solid day overall, finishing with six catches for 53 yards, serving as a catch receiver late in the game for Roethlisberger as the veteran QB heated up.

Zach Gentry really got involved in the passing game early as well and also recorded an explosive play in the process. Gentry hauled in a 25-yard catch-and-run that gave the Steelers’ offense some life, helping him finish with four catches for 39 yards.

The duo struggled as run blockers, as expected against the Ravens’ front, but they really chipped in nicely through the air, which was much needed.

Yes, Ben Roethlisberger was sacked just once and hit two other times by the Ravens on Sunday, but this offensive line remains an absolute dumpster fire overall.

Every single starter up front was called for a penalty in the win, but there was none bigger than the facemask penalty on left tackle Joe Haeg that wiped out a big catch-and-run by Snell in the fourth quarter. Haeg starting and playing every snap all but assured that the Steelers won’t get a compensatory pick for losing Matt Feiler either. That’s asset management malpractice, in my opinion.

John Leglue had some bright moments but overall struggled with the power of the Ravens’ interior defensive line, while Chukwuma Okorafor made a couple mistakes leading to tackles for loss.

I noticed also that Trai Turner really struggles to communicate with the center on the road due to crowd noise. He failed to get JC Hassenauer to snap the football in time, resulting in a rough burned timeout late in the fourth quarter that simply shouldn’t have happened.

Cam Heyward and Chris Wormley had great games overall getting after young Ravens’ quarterback Tyler Huntley, combining for three sacks, but the defensive line as a whole was truly awful defending the run as the Ravens ran for an impressive 249 yards on the day on 36 carries, bashing the Steelers’ defensive front over and over and over again.

Fortunately for Pittsburgh, Ravens’ offensive coordinator Greg Roman seemingly abandoned the run game late, allowing the Steelers’ defense to get off the field in key spots.

Wormley and Montravious Adams will make really solid depth next season, but as starters against run-heavy teams it’s just not working.

TJ Watt was his disruptive self once again, tying the NFL’s single-season sack record in the second half. He should have had a sacked credited to him earlier in the game on a play in which he forced a fumble of Tyler Huntley as well. Hopefully the NFL changes that ruling sometime Monday. He was truly a one-man wrecking crew, recording five tackles, a sack, a forced fumble and three quarterback hits in the winning effort.

Opposite Watt, Alex Highsmith was really quiet, which was a bit concerning. He did have four run stops, but he just wasn’t in the backfield often as a pass rusher, recording just one quarterback hit in the win.

Inside, Devin Bush and Robert Spillane were absolutely dreadful against the run, serving as the primary issues on multiple long runs by Raven’s running back Latavius Murray, who rushed for a game-high 150 yards and a touchdown (46 yards) on just 16 carries. Bush and Spillane get pushed around far too easily.

Same for Joe Schobert, who was about as visible as I was out there on Sunday. This inside linebackers group is absolutely dreadful and is in serious need of overhauling this offseason once again.

What a performance by the Steelers’ secondary in this one.

Terrell Edmunds had arguably his best game of the season, picking off a Tyler Huntley pass and holding his own against All-Pro caliber tight end Mark Andrews throughout Sunday’s game. He’s a sound tackler and is starting to make more plays in coverage. I hope he’s retained.

Minkah Fitzpatrick made the play of the game in the fourth quarter, breaking up a Huntley pass intended for Marquise Brown on the Ravens’ sideline, arriving just in time to punch the football away and blast Brown out of bounds to ensure the incompletion.

If Pressley Harvin III weren’t part of this grading process, this would be an A or an A+ for the Steelers on special teams. Harvin, returning following the death of his father, had a dreadful performance. I respect him for giving it a go and I greatly sympathize with him regarding what he’s going through, but he shouldn’t have been out there. He really hurt the Steelers, averaging just 37.3 yards per punt, failing to pin the Ravens deep throughout the game.

Thank goodness for Chris Boswell though. In terrible conditions, Boswell drilled all three field goal attempts, including the game-winner from 36 yards and went toe-to-toe with Justin Tucker once again. Special kicker. What a find.

I loved what I saw from McCloud in the return game. He had some tremendous punt returns that gave the Steelers great field position, including his 23-yarder in the fourth quarter to give the Steelers the ball at midfield, which set up the go-ahead touchdown drive 11 plays later. He also had a great 32-yard kick return to spark the Steelers on special teams.