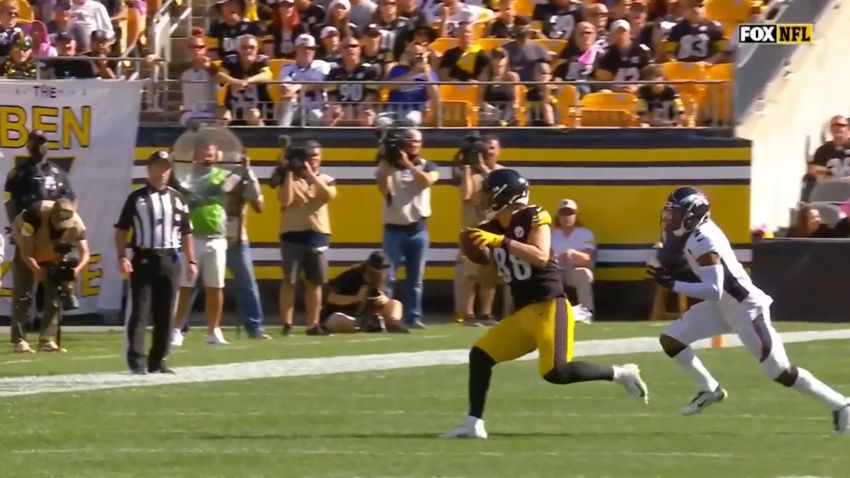 His numbers are not going to get him into any Pro Bowl, but it’s been the consensus that Pittsburgh Steelers tight end Pat Freiermuth had a strong rookie season. The second-round draft choice recorded 60 receptions for 497 yards and seven touchdowns in 16 games this year, with few mistakes—even if his fumble at the end of overtime against the Lions was tough to swallow.

As the season went on, we began to hear comparisons being made to other tight ends, perhaps future aspirations, like Mark Andrews of the Baltimore Ravens, against whom he will play twice a year. Another tight end the rookie watches is Travis Kelce of the Kansas City Chiefs, and he talked about the All-Pro with Jim Rome yesterday.

“Everything impresses me about him”, he said of Kelce. “I think he’s just such a good, reliable target for [Patrick] Mahomes, and I think that the one thing that stands out to me is his YAC ability to take a flat route all the way for a touchdown, regardless of where he is on the field. I think that’s the one thing that sticks out to me the most”.

The ninth-year veteran caught 92 passes this season for 1,125 yards and nine touchdowns in 16 games, his sixth consecutive 1,000-yard season. The only game that he missed was the previous game against the Steelers, when he was out on the Reserve/COVID-19 List. The Chiefs still won by 26, of course.

“I think that’s definitely where Coach [Mike Tomlin] challenges me, and my next step as a player is to have that capability of taking a flat route to a touchdown, regardless of the field situation”, Freiermuth said. “That’s probably the biggest takeaway for me watching him play”.

That is actually something Tomlin has commented on publicly this year, back in November, talking about body control. “It’s played out in the back of end zones and along the end line and so forth. But it’s also played out in terms of run after catch”, he said, following the first Browns game, also specifically acknowledging that they were challenging him in that area.

“That’s something that we’re challenging him to grow in and something that he has a desire to grow in”, he continued. “The significant tight ends, the unique ones, the ones that keep you up at night, like Kelce or [George] Kittle, man, those guys are not only dangerous in terms of their ability to catch the ball, but what they do with the ball after they get it. And so he’s working in growing in all areas as well”.