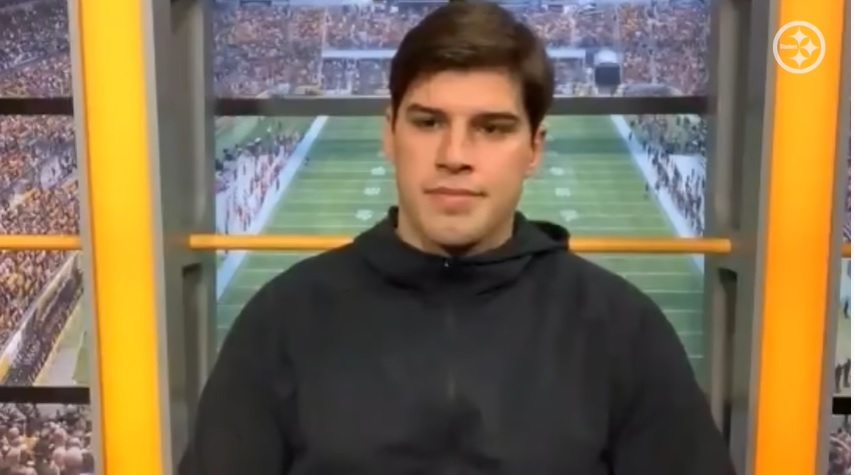 Mason Rudolph feels he can step out of Big Ben’s big shadow. Since being drafted in the third round of the 2017 Draft, Rudolph has always been Roethlisberger’s backup. Now, he can become Roethlisberger’s replacement.

Speaking with reporters in a lengthy Q&A session Wednesday, Rudolph talked about his approach heading into the first year without #7 in front of him.

“I think coming back here and having a good OTAs,” Rudolph said via the team’s YouTube channel. “Hopefully, God willingly, we’ll have practice of some sorts, and then training camp and put my best foot forward. Knowing that I can maybe be a bit more myself as being the leader that I have always been at the quarterback position and not worried about stepping on the toes of a longtime Hall of Fame player.”

Rudolph stepped into an organization with strong, established leadership and a Hall of Fame quarterback like Roethlisberger. Rudolph’s job wasn’t to lead, it was to learn, and in 2019 when Roethlisberger was injured, it was largely about surviving. Dealing with injuries and musical chairs with Duck Hodges, it was hard to establish any leadership, especially for a then-second year guy like Rudolph in his first NFL action.

Rudolph’s point about stepping out of those shadows is an important one. And one that Roethlisberger made two weeks ago. Here’s what he said about the future QB competition on January 5th.

“I think this offseason probably knowing that there’s gonna be a competition for it, I think that’ll be good for him. It’s probably pretty hard to wrap your mind around, ‘what do I have to do to be the starter when there’s a old veteran guy ahead of you.’ So I think that could do wonders for him this offseason.”

Roethlisberger was the offensive tone-setter. On days where he didn’t practice, the energy on the field was noticeably lower. He was the guy everyone looked to, especially in tight, nerve-wracking moments. He was an imperfect leader but his absence creates a massive leadership void on a team who now lacks any offensive leaders. Pouncey’s gone, DeCastro’s gone, Villanueva’s gone, Roethlisberger’s gone.

There’s hardly a legitimate veteran on that side of the football, especially assuming Trai Turner does not return for 2022. Someone will have to step up. And whoever demonstrates leadership in that room could command the starting job, too.

Like Haskins, Rudolph has been told he’ll have the chance to compete.

“A competitive person and I’ve got a lot of confidence in myself,” he said when asked if he thinks the team will bring in outside competition. “And I think that I can be the guy next year and that’s my plan. I want to be the guy…I’m not going to begin to try to make a forecast on who’s going to be in the room. This is the NFL, things are quickly ever-changing.

“And my job is to be in contact with the coaches and look forward to whenever we get to come back here, phase one, and control what I can control and prepare myself. But who knows. There’s a million scenarios, as you mentioned, the draft or somebody in free agency. I have no idea. But I know that I’m going to compete.”

Rudolph and Haskins will compete to lead this team next year. They’ll probably be joined by someone else. A veteran, a rookie, possibly even both. And Josh Dobbs can’t be forgotten about either. Someone will have to take control of this offense, a question that hasn’t been asked in 18 years.