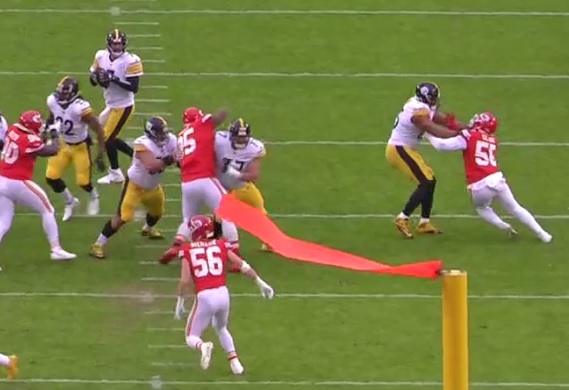 It can often be difficult to face the same team a second time in less than a month, but that’s exactly what the Pittsburgh Steelers will have to do on Sunday at 8:15 p.m. inside Arrowhead Stadium against the No. 2-seeded Kansas City Chiefs in the Super Wild Card matchup.

The last time the two teams squared off, Kansas City was able to do whatever it wanted to do against the Steelers offensively and defensively to the tune of a 36-10 win.

Now, ahead of Sunday’s matchup, the Steelers are going to need to make some changes — both subtle and significant — in order to put forth a much better showing inside Arrowhead Stadium in front of a national audience in the AFC playoffs.

Speaking to reporters on Tuesday during his weekly media availability, Tomlin stated that the Steelers know they were outplayed and outclassed in that Dec. 26 matchup on the road. Despite the tough showing and the lopsided outcome, Tomlin stated the Steelers are not going to be paralyzed by that outcome and are looking forward to embracing the opportunity to prepare for a tough Chiefs’ team once again in January football.

“We have big time challenges ahead in terms of preparing for Kansas City. We’ve been to Kansas City very recently. They handled us and handled us definitively,” Tomlin said to reporters Tuesday, according to video via Steelers.com. “And so we understand that, but at the same time, we’re not paralyzed by that.

“We accept that we didn’t play well enough last time. We accept that we didn’t plan well enough last time, but that’s last time. And we’re excited about the process of readiness this time, putting together a better plan, putting our guys in position to make more consistent plays, particularly in a weighty moments, situational ball. We realize where we are in terms of the scarcity of these opportunities, man. We’re just living in the moment and we’re really excited about doing so. We better get ready physically.”

Tomlin’s comments match what Steelers’ cornerback Cameron Sutton said Monday regarding a matchup with the Chiefs in a hostile environment once again, with Sutton stating the Steelers have to start fast and play with their own energy on the road to try and take the fans out it in arguably the loudest venue in the NFL.

Along with playing with their own energy, Tomlin hinted on Tuesday at the Steelers making some significant in-house changes to concepts. No, that won’t include new personnel in a do-or-die scenario, nor will it include significant lineup changes overall. What it will result in, Tomlin hinted at, were some changes to formations, concepts and situational football that might appear subtle to viewers at home, but is rather significant within the building.

“I’ll say this, the changes are subtle for those that aren’t in our business. The changes are significant for those that are,” Tomlin said. “Not only changes that we make, but changes that they make. When you’re watching the game at home through the lens of a television camera, it might not be significant, but the things that you do in these matchups, the alterations that you make in terms of concepts that you employ, whether it’s offensive concepts or defensive concepts, are very significant. And particularly in situational football, possession downs, red zone, two minute, et cetera.

“Again, significant might not mean that it’s not subtle, but the weight of it is significant,” Tomlin added.

What those changes are that Tomlin alluded to remains to be seen once the ball is kicked off on Sunday night inside Arrowhead Stadium. Will they even be noticeable to viewers at home? Unlikely, but you can bet the Steelers — who are 13-point underdogs in the Wild Card matchup — will pull out all of the stops to try and live to fight another day in the playoffs.