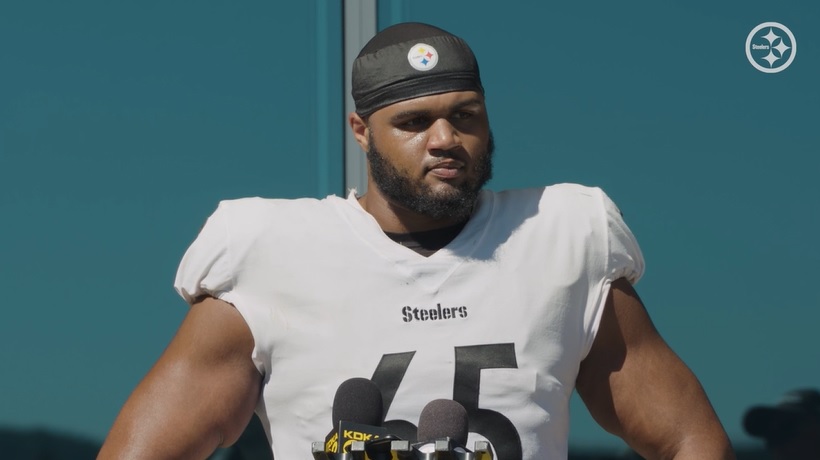 Dan Moore Jr. may not have played his best game of the season Monday night, but given the circumstances, it might have been his most impressive showing. He showed his toughness against the Cleveland Browns, not missing a snap despite badly twisting his ankle in the first quarter of the win. Matt Canada praised Moore for staying in the game and big-picture, for the bright future he has.

“For him to continue to play Monday night was really, really impressive,” Canada said in a Zoom call with reporters in audio provided by the team. “He got rolled up in a very bad way. It’s what he’s done all year.”

The injury came on a 3rd and 2 run by Najee Harris. You’ll see in the clip below that Moore gets his legs taken out from behind, his left ankle getting caught under his body weight and twisting. Moore stayed down on the ground for a moment and limped back to the huddle, but never came off the field.

Clip of the injury. Looks like that left ankle got bent pretty badly. Happened in the first quarter, Moore didn't miss a snap. Props for finishing out the game against a tough opponent. #Steelers https://t.co/kfTGPaUNo2 pic.twitter.com/6IGnHFaKwN

Myles Garrett still won his matchups, that’s to be expected, but Moore held his own. His performance looks even better when you consider the ankle injury he played through.

A long rookie season with an extra, 17th game, hasn’t caused Moore to hit the rookie wall like so many of his peers have.

The NFL is a whole new world, but Moore was a battle-tested player in college, a multi-year SEC starter. The quality of that experience coupled with his athleticism is what got him drafted. Zach Banner’s lingering knee injury got Moore in the starting lineup and accelerated his development.

Moore took his rookie lumps to start the season but has played much better down the stretch. The Steelers’ O-line will enter the offseason with plenty of question marks, but the 2022 starting left tackle shouldn’t be one of them. Moore has played well enough to enter next year as the starter.

That’ll allow the team to focus on the rest of the line, primarily center, right guard, and right tackle. Kendrick Green has struggled mightily his rookie season while RG Trai Turner and RT Chukwuma Okorafor are pending free agents. Considering how much this group struggled overall in 2021, the Steelers should keep looking outside the organization to build that group up.