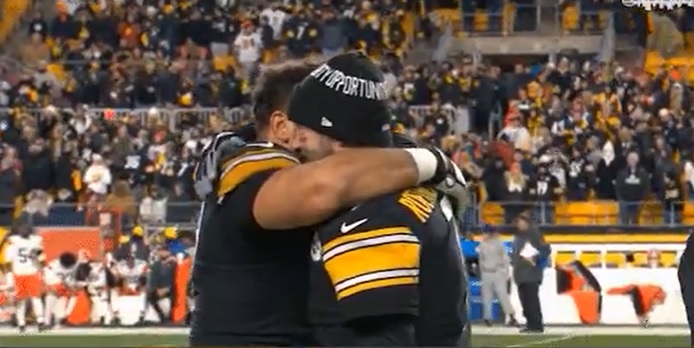 In an emotional atmosphere at Heinz Field Monday night for the likely final time Ben Roethlisberger played in front of his home fans, longtime teammate and fellow captain Cameron Heyward had an emotional night of his own.

A teammate of Roethlisberger’s for 11 years and a fellow captain for the last seven in the Steel City, Heyward was right alongside Roethlisberger as a key face of the franchise for nearly the last decade.

Knowing this could be the final time Roethlisberger suited up in the black and gold at Heinz Field, Heyward bottled up that emotion and let it all out through his play, turning in yet another dominant performance against the Cleveland Browns, helping a banged up Steelers’ defense roll to a 26-14 win, keeping the Steelers’ slim playoff hopes alive for another week.

Against the Browns, Heyward recorded four tackles, one tackle for loss, one sack, two quarterback hits, and two pass deflections at the line of scrimmage — one of which resulted in a turnover on downs. Asked after the win what the performance meant to him, the always quotable Heyward dropped a gem.

Hell of an answer from Cam Heyward on his play tonight.

"I wanted to make sure my level of play matched how I feel about him [Ben Roethlisberger]."

“I wanted to make sure my level of play matched how I feel about him [Ben Roethlisberger],” Heyward said to reporters following the game, according to video via the Steelers’ official YouTube page. “A lot of guys felt the same way. Man, he’s a Hall of Fame quarterback and a Pittsburgh Steeler legend, Ring of Honor guy.  He’s gonna get every accolade, and I feel very fortunate that I’ve played with a lot of Hall of Fame players, thanks to him.”

It was pretty obvious right away how juiced the Steelers were on both sides of the ball for Roethlisberger’s final home game, playing with a level of fire and overall passion that hadn’t been seen consistently this season.

That’s no true fault of the Steelers throughout the 2021 season as Pittsburgh has dealt with a ton of injuries and some real frustrations in-game, in terms of performance.

On Monday night though, with Roethlisberger setting the tone last Thursday stating that all signs pointed to this being it, the Steelers rose to the occasion, led by none other than Heyward, who was a man possessed defensively.

With Heyward dominating inside, T.J. Watt, Alex Highsmith, and even Derrek Tuszka were able to get after Baker Mayfield on the night, as the Steelers recorded an astounding nine sacks and batted numerous passes at the line of scrimmage, led by Heyward’s two.

Safe to say Heyward’s level of play certainly matched how he felt about Roethlisberger, which — in the end — helped drag the Steelers and the veteran gunslinger to one more win over the Browns in a storied career.