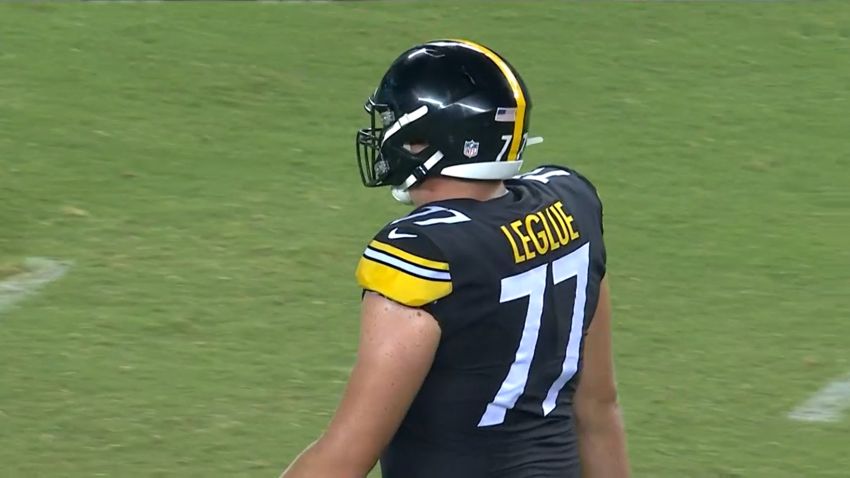 It’s been a good year to be John Leglue. He spent the offseason on the Pittsburgh Steelers’ roster and impressed enough during the summer to make the practice squad. When injuries piled up along the Steelers’ offensive line, he was signed to the team’s active roster, an understandably emotional moment for him. He’s logged his first NFL snaps, made several starts, and become something of a cult hero among Steeler Nation. And oh yeah, he rang in the new year with some pretty important personal news, too.

Leglue has seized every moment 2021’s offered him. That much is evident on the tape, Leglue running to the pile and falling on footballs every chance he gets. Speaking with reporters Thursday, Matt Canada praised the energy Leglue has.

“If you really just watch him every play, he plays with such great passion and effort,” he said in audio provided by the team. “Our limitations that everybody has, everybody’s good at some things and not as good at other things. I think if you watch him, he plays so hard. And I think his energy, you feel that. I think our group has felt that when he has come in and played.”

It was especially obvious in Monday night’s win over the Cleveland Browns. Yesterday, we shared two examples of Leglue running in at the end of plays, looking to push the pile, fall on the ball, or prevent a defender from picking it up.

Thought John Leglue played his best game of the season Monday against the Browns. One theme that's been constant all year though has been his effort. Runs downfield every play.

Guy has a nose for the football, ha. #Steelers pic.twitter.com/ykhF6SfKGt

That “big kid” energy has littered his tape all season. Leglue’s path to the NFL has been a difficult one, like it is for virtually every undrafted free agent. He’s bounced around from team to team before finding stability in Pittsburgh. Leglue is the fifth left guard the team has had this season and he might be their last, finishing out 2021 unless Kevin Dotson can get activated for Sunday’s game.

“Obviously his execution, all those things, I’m not minimizing that, but it’s the NFL you’re supposed to do things like that,” Canada said. “His ability to play with passion to give energy to the other guys has been something I think we’ve really benefitted from when he’s been in there.”

Passion and energy alone isn’t going to make someone an NFL starter. But when your talent isn’t elite, and Leglue’s isn’t, passion and energy can go a long way. And to his credit, Leglue showed impressive tape against the Browns. It was arguably his best performance of the season, showing a strong anchor in pass protection, staying square to his blocks, and creating movement in the run game.

With the Steelers’ line healthy and likely evolving for 2022, Leglue probably won’t enter as a starter. But he’ll have an inside track on a backup swing role. He’s versatile enough to play every position except for left tackle. That could make someone like Joe Haeg expendable if Pittsburgh wants to go younger and save a tiny bit of cap space next year.