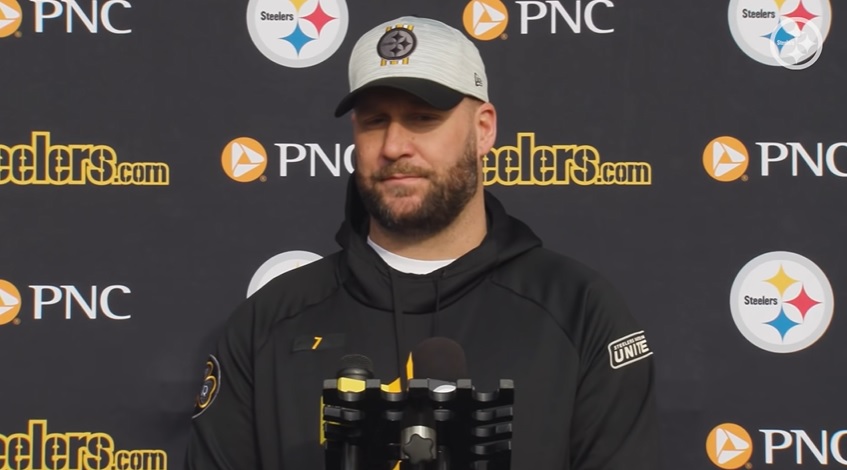 With the 2021 season coming to an end, so is Ben Roethlisberger’s career. The Steelers’ future of the quarterback position remains in flux.

Outside of the quarterback position, the rest of the offense has talent for the future. Roethlisberger discussed the future of the offense and its talent as he prepares for retirement shortly.

“There’s a lot of great weapons there,” Roethlisberger said Wednesday via the team website. “You know, the wide receiver position, you don’t know what’s gonna happen. Contracts and free agency always kind of puts wrinkles on things, but there’s some really skilled guys.”

JuJu Smith-Schuster is a free agent after the season after signing a one-year, $8 million contract last offseason. Diontae Johnson becomes an unrestricted free agent after the 2022 season. For the time being, Chase Claypool, Najee Harris, and Pat Freiermuth remain on rookie contracts as well.

“The line is young, but there’s some pretty good talent there. The way that Dan Moore fought through an early injury this last week, a painful one, [was impressive]. Obviously you know what Chuks [Okorafor], there’s some contract stuff there. KG’s (Kendrick Green) doing some great things. It’s gonna be exciting to see the growth of this offense.”

Moore’s shown some nice progression in his rookie season, including helping limit Myles Garrett in Week 17. Obviously you don’t expect Roethlisberger to say much else or to bash his fellow teammates, but the offense does have promise for the future. With an improved offensive line, the next quarterback in line could thrive with the weapons the Steelers have.

It’s a collection of youth across the board from the offensive line to skill positions. While the group experienced predictable growing pains, they should be better top to bottom next season. A guy like Moore in his second season, battle-tested after a full year in the NFL. The chance for Najee Harris to take another step, already discussing how much film he’s getting ready to watch this offseason.

With that being said, some guys’ potentials need to be unlocked, like a Chase Claypool for example. Although Roethlisberger wishes he could be going out on a better note like a Super Bowl (remains possible by a minuscule), he leaves with the offense in a bright position.