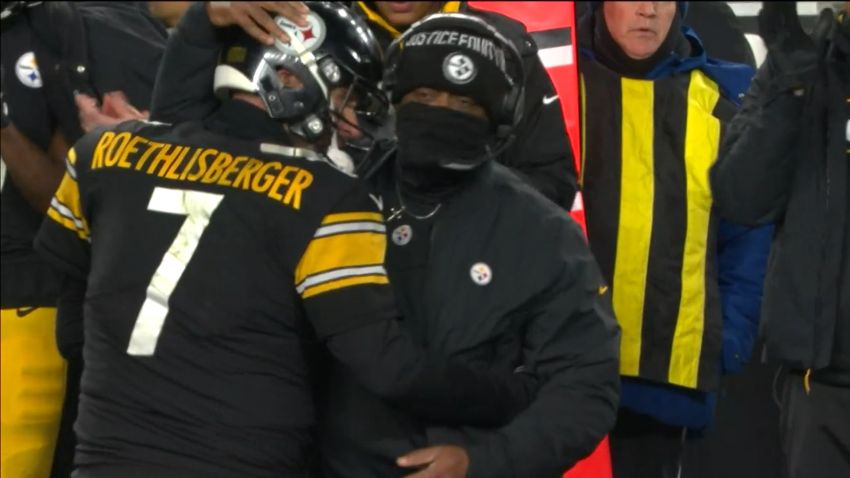 The Pittsburgh Steelers secured victory on the backs of Najee Harris and T.J. Watt and his defensive allies, but the night was about nobody but quarterback Ben Roethlisberger. His numbers certainly weren’t gaudy, but he still helped offer a fitting final chapter for his last lap around Heinz Field.

Harris closed out the game with a breakaway touchdown to put the score out of reach, which will go down as Roethlisberger’s final meaningful drive. A late Tre Norwood interception allowed him to take one final snap on a knee. Two rookies helping to write the end of Roethlisberger’s story, the way he helped close out Jerome Bettis’—albeit in his second year, and in much different circumstances.

The team was understandably reflective this week, especially as the game wound down to a close. Head coach Mike Tomlin gave Roethlisberger a big, enthusiastic hug as he walked off the field following that Harris touchdown. He had plenty to say about his time with the future first-ballot Hall of Famer.

“I was just appreciating the last 15 years with him”, he said when he was asked what was going through his head after the game. “Man, we’ve been through a lot. We’ve seen a lot. It’s been a heck of a ride. It’s been one that’s been an honor to be a part of and enjoy. But that’s just largely what I was thinking about in that moment”.

The Steelers drafted Roethlisberger in 2004. Tomlin was hired in 2007. They’ve spent the past 15 years together, winning plenty of games, even reaching the Super Bowl twice and claiming a title once—the second for the quarterback. But even on this night, it was all business in a must-win game, and it was the quarterback leading the way.

“Like I said several times during the week, and I meant it, Ben really did a nice job of setting the pace”, Tomlin said of how his team kept focus on the goal, rather than the event, leading into this game. “He was singularly focused, it was business as usual, and so he was easy to follow, and I think everybody got their vibe from him in that way. Obviously it was an extremely emotional night and all of that, but he did a really good job of kind of setting the post for that approach all week”.

Roethlisberger’s stat line is frankly not even worth quoting, not just because they were unremarkable, but also because it wasn’t about the numbers. It was about the now, and the past. The moment, and the past 15 years.

“Tonight, we just pause and we’re appreciative of Seven and his body of work, and had an awesome opportunity to share in this moment with him”, Tomlin said at the opening of his press conference after the game. “We’re just so appreciative of Seven, not only his play, but his leadership. Just a tough night, but an awesome night.