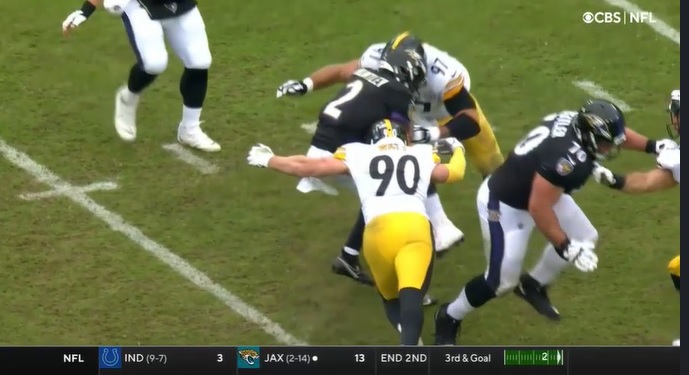 In the NFL record book, T.J. Watt is tied with Michael Strahan for the single-season sack record. But in Cam Heyward’s personal record book, Watt is the outright leader. After two controversial plays involving potential Watt sacks, Heyward believes Watt should be – and is – the lone record holder.

He spoke with 102.5 DVE this morning to make his case.

“The quarterback got up and T.J. punched the ball out again,” Heyward told DVE Tuesday morning. “I still view it as a sack. And then he got hosed on my penalty. In my book he set the record.”

Watt appeared to tie the record early in the first half. After a bad snap by the Ravens’ center, quarterback Tyler Huntley fell on the ball, tried to get up, but was tackled and stripped of the football by Watt, recovered by DL Henry Mondeaux. But the official scorer ruled it an aborted snap, negating the sack. Watt, did at least, get the forced fumble. Aborted snap rulings are relatively common but in this case, it’s a question of if Huntley was past that part of the play as he recovered and briefly attempted to make a play with the football.

The Steelers have reportedly asked the NFL to review the play. Normally, any changes in scoring get made by tomorrow. So if Watt gets sole possession of the record, he’ll probably find out sitting on his couch or something.

Watt also had a half-sack taken away from him late in the first half, teaming up with Heyward to take down Huntley. But Heyward was called for roughing the passer for making contact with Huntley’s helmet, again wiping out the sack.

But the refs made the correct call, Heyward hit Huntley with his helmet, and so the sack was wiped out. But on the very next play, Watt beat the chipping tight end and right tackle to bring Huntley down for a true, official sack, tying Strahan’s 20 year-old record. If those two other players would’ve counted, Watt would finish 2021 with a whopping 24 sacks.