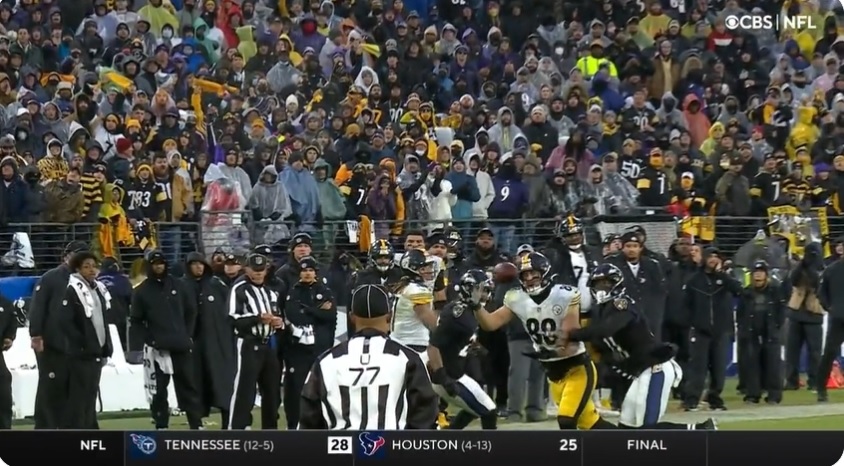 Five different times during the Pittsburgh Steelers’ two most important drives late in Sunday’s Week 18 game against the Baltimore, the Steelers faced a third or fourth and long to keep hope alive. Not just for a win over the Ravens, but to make the postseason – the Steelers needed a win over Baltimore (coupled with Indianapolis’ loss to Jacksonville) to make the playoffs as the final seed.

Each of those five times, the Steelers converted the third or fourth and long play. A pair of conversions in regulation helped lead to a touchdown pass to Chase Claypool with 2:54 left, giving Pittsburgh a 13-10 lead and its first touchdown (and lead) of the second half. And then two third down conversions and a fourth down conversion in overtime continued a 15-play drive for the Steelers, which ended with a 36-yard field goal by Chris Boswell with 1:56 remaining to likely send the Steelers to the postseason, with a 16-13 win over Baltimore.

Every single one of those conversions was a passing play. Two of them went to Ray-Ray McCloud, who got a third-down catch on the touchdown drive and then converted on fourth down in OT. Another one, during the overtime drive, went to Diontae Johnson.

His connection with Roethlisberger proved valuable for the Steelers in the biggest moments of Sunday’s win, and that’s the type of outcome Pittsburgh has been trying to manufacture since offseason workouts. Freiermuth spoke about that connection during a press conference following the team’s victory.

“It means a lot, obviously coming in, just kind of feeling that relationship in OTAs early on in the season. And, you know, I think it all paid off to this moment in that big-time, critical situation,” Freiermuth said. “And credit to him [Roethlisberger] for throwing the ball where it needed to be, and credit to the coaches and them for putting us in that situation to make that play.”

Those two completions weren’t the only times Roethlisberger tried to go to Freiermuth with a lot on the line Sunday. Getting the ball back in a tied, 13-13 game with 1:13 to play in regulation, Roethlisberger threw to Freiermuth on third down and the team nearing midfield. However, Freiermuth didn’t fight far enough forward to get the first before going out of bounds, coming up one yard short, and Pittsburgh punted it away to set up overtime.

The late-game mistake for Freiermuth was a callback to Pittsburgh’s Week 10 tie against the Detroit Lions, when Freiermuth fumbled the ball in overtime with Pittsburgh driving for a game-winning field goal. He did not get a chance to make up for that mistake in that game, but took advantage of the chance he had to still make a big play against the Ravens.

Sunday’s win likely earns Pittsburgh the final spot in the postseason, but is not assured as of yet. The Steelers had to defeat Baltimore on Sunday to make the postseason, as well as see the Jacksonville Jaguars upset the Indianapolis Colts, which they did 26-11. The only remaining requirement for the Steelers to make the postseason is that the Sunday Night game between the Las Vegas Raiders and Los Angeles Chargers does not end in a tie. Both teams are 9-7, and sit above the Steelers, who are 9-7-1. Both teams own the tiebreaker over Pittsburgh, and would retain the final two Wild Card berths should all three teams end up at 9-7-1.