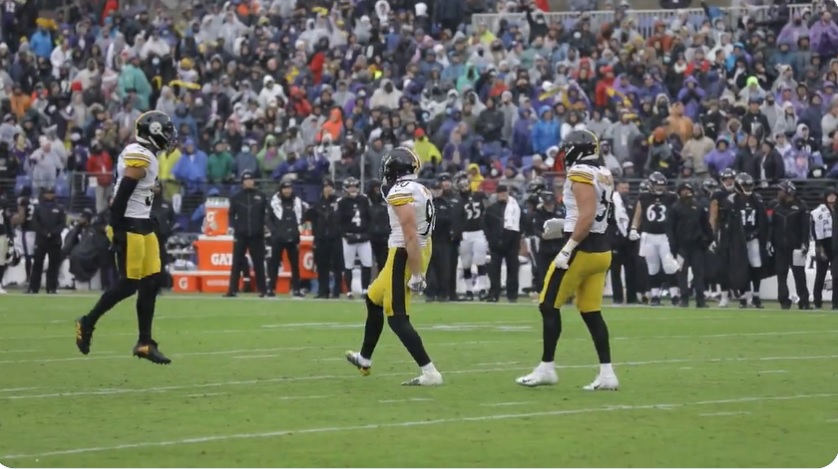 The divisional clash between the Baltimore Ravens and the Pittsburgh Steelers Sunday was highly anticipated for several reasons. For starters, both teams were on the outside looking in for the playoffs and needed to win this game to have a chance if other variables went their way. This game also marked the likely last regular season game of QB Ben Roethlisberger’s career, potentially ending the same place it started in Baltimore dating back to 2004 unless by some miracle the Jacksonville Jaguars upset the Indianapolis Colts to give Pittsburgh a shot of extending their season into the playoffs with a win.

Jacksonville held up their end of the bargain, and Pittsburgh ended up winning the game in a nail biter in overtime 16-13. To make matters worse, the Chargers and Raiders almost tied Sunday night which also would’ve eliminated Pittsburgh from postseason contention, but Las Vegas won in stunning fashion on a walk-off field goal by Daniel Carlson in overtime to cement Pittsburgh’s status as the seventh and final seed in the playoffs. While these narratives carry their own respective weight, another that was heavily talked about heading into the game was the fact that T.J. Watt only needed one sack to tie Michael Strahan’s all-time single-season sack record, thus needing 1.5 sacks or more to make the record solely his own.

The way the game started out, it looked like sole possession of the record was in the bag for Watt. On the first series, a botched snap by #77 Bradley Bozeman put the ball on the ground. As QB #2 Tyler Huntley tried to stand up after gathering the football, Watt beat RT #65 Patrick Mekari around the corner, knocking Huntley down in the backfield for what seemed to be the tying sack hardly five minutes into play.

Sadly, the play was reviewed and labeled as ABORTED, as the snap was never clean coming from the shot gun. Whether the correct ruling or not, there is no denying the snap was botched when watching from the QB’s viewpoint as you watch Bozeman snap the ball straight into his own behind.

Still, this didn’t deter Watt from continuing to make a profound impact in a must-win game for Pittsburgh. While Watt’s prowess as a pass rusher often is the topic of conversation, his play as a run defender especially when applying backside chase cannot go understated. Watch this play as Watt comes off unblocked on the run to the left side, flattening his angle of pursuit as he tracks down RB #33 Devonta Freeman from behind, bringing him down before he can get through the hole.

Watt was applying pressure off the edge all afternoon, playing with an impressive motor as he worked for the single-season sack record as well as to help stamp Pittsburgh’s bid into the postseason. Watt constantly was double teamed in this one as you can see on this play, getting chipped by TE #85 Eric Tomlinson as he rips through the outside shoulder of Mekari to chase down Huntley in the pocket who manages to just get the ball off before Watt can bring him down.

Watt’s most impactful sequence of plays came when Pittsburgh needed it the most. Baltimore is driving into the red zone and is looking to go up 7-3 before the half with Baltimore receiving the ball in the second half. Watt and Cam Heyward team up on this pass rush attempt, both getting off their blocks and meeting at Huntley who tries to escape, taking him down for the split sack. However, Heyward is flagged for unnecessary roughness, negating the sack, and giving Baltimore a fresh set of downs inside the Pittsburgh five-yard line.

The very next play, Watt gets the job done. With Mekari out of the lineup battling injury throughout the game, #62 David Sharpe comes in at RT to try and block Watt. The Ravens again have Tomlinson chip on Watt before going into his pass route, giving Sharpe time to drop into his pass set. However, Watt is too fast for Sharpe around the edge as the lineman completely whiffs, failing to get a hand on Watt who flies around the edge and wrestles Huntley down to the ground to tie the single-season sack record.

Just two plays later on third down, Watt comes up big again. The Ravens again assign Tomlinson to chip on Watt to start the play before going into his route, but Huntley rolls out of the pocket to his right, not giving David Sharpe a chance to get Watt blocked. Watt elevates into the air with outstretched arms as Huntley attempts to pass, knocking the ball down for the incomplete pass thus forcing Baltimore to kick the field goal and go into the locker room tied 3-3.

While Watt may not have officially broken the single-season sack record, he successfully wreaked yet another game for the opposing offense being unblockable for most of the contest despite Baltimore assigning multiple blockers to contain him. He made plenty of plays and was so close to adding another sack to the stat sheet on multiple occasions.

It remains to be seen if Elias Sports Bureau will officially rule the botched snap or an aborted play with a decision likely coming in the next couple of days. However, Steelers fans should rest easy that their superstar edge rusher came up big when it mattered most, helping Pittsburgh make the playoffs, tying the single-season sack record despite missing two full games and leaving several others early, and doing everything in his power to lock up the Defensive Player of the Year Award he so clearly deserves.

What are your thoughts on T.J. Watt’s performance against the Ravens? Do you discredit him at all for not breaking the single-season sack record, or would you consider his season performance that much more impressive giving the circumstances? Do you think that botched snap should’ve been a sack or ruled and aborted play? What do you think the final ruling on the play will be? Please leave your thoughts in the comments section below and thanks again for reading!