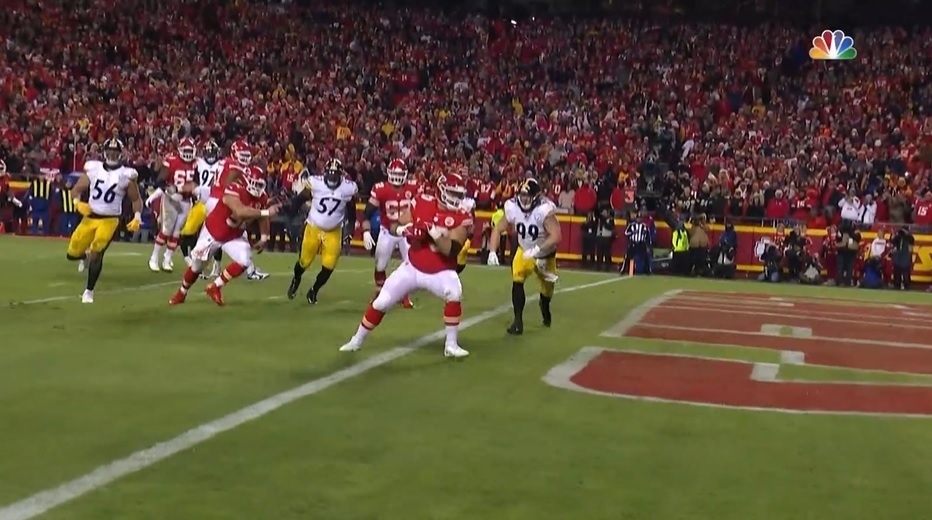 Nothin’ up my sleeve.

The Kansas City Chiefs were the magician Sunday night. The Pittsburgh Steelers were the wide-eyed audience member, beckoned to the stage, trying to figure out where the magic came from.

No team gets into a groove like the Chiefs. Sure, you can knock them of their pace from time to time, as this defense – to their large credit – did Sunday night. But once that train gets rolling, there’s no stopping it. Pittsburgh felt the brunt of that starting in the second quarter with three Chiefs’ touchdowns, turning a 7-0 defeicit into a 35-7 lead in the blink of an eye.

That included going 4-4 in the red zone. And three of their touchdowns had the Steelers looking downright silly. Let’s briefly look at them and try to figure out where the heck the ball went. Pittsburgh’s defense sure couldn’t find it.

First one to tie the game. Jet motion on the snap with Patrick Mahomes faking the ball in the right flat to WR Mecole Hardman. Gets the defense, notably T.J. Watt, flowing that way, trying to bat down a quick pass to the flat the Chiefs completed on 3rd and 1 earlier in the game.

But, nope, the ball isn’t going that way. Instead, this is their version of the shovel option with Mahomes underhand zipping the ball to Jerick McKinnon, open in the middle of the field, who turns upfield and untouched into the end zone.

It’s worth noting this is not a brand new concept the Chiefs have dialed up. It’s been part of their playbook for a little while now. Here’s Mahomes hitting Travis Kelce on it in November of last year, and here it is earlier in the year.

How do you stop it? I truly don’t know. You’re trying to take away the appearance of a quick throw in the flat where you’re trying not to get out-leveraged all while trying to key the receiver getting lost in the middle of the field. Unless you sort of get lucky or get a linemen to come off a block, this one is a pain to defend, especially with how Mahomes is able to zip the ball in there and catch the defense completely off-guard. The shovel-option played on expert level.

Next one. Third quarter. TD to OL Nick Allegretti. After the game, Mahomes said Allegretti was his fifth and final part of the progression. But he got open, tossing T.J. Watt down, and caught the touchdown. You think you’ve defended everything as a defensive until the big guy is standing over the goal line, though FB Michael Burton was also open in the flat had Mahomes chosen a more conventional route. But when you can throw it to your big ugly, you do it.

Finally, just to rub it in, Travis Kelce’s TD pass. Chiefs come out in a wild formation, a sort of inverted T-Formation look with three skill players up front and Patrick Mahomes dotting it behind. It’s all an illusion, all window dressing, to get the defense so focused on what potential motion, fake, option pitch could be happening that the defense never expects Kelce to throw the football.

Kelce takes the snap, comes to a mesh point with WR Tyreek Hill, but decides to throw to WR Bryon Pringle, who beats Cam Sutton to the inside for the touchdown. Linebackers suck up, creating an easy window to throw behind.

The Chiefs didn’t need this play to win. They did it because they could. Because nothing could stop them.

Check out the reactions from Watt after the McKinnon and Pringle TDs. Watt shaking his head, Heyward putting his hands up. A don’t know what to do about that one sort of emotion.

Kansas City were, and are, the Harlem Globetrotters. They make the sport fun. They’re so talented they can think about all the wild and crazy stuff every team can’t comprehend or would even consider adding to their playbook. The Chiefs showed more innovation here than the Steelers have in the last four seasons.

Pittsburgh was forced to play the role of the Washington Generals, standing around as the Globetrotters danced around them, completely at their mercy while the audience pointed, laughed, and were greatly entertained. Two teams on totally different levels Sunday night.