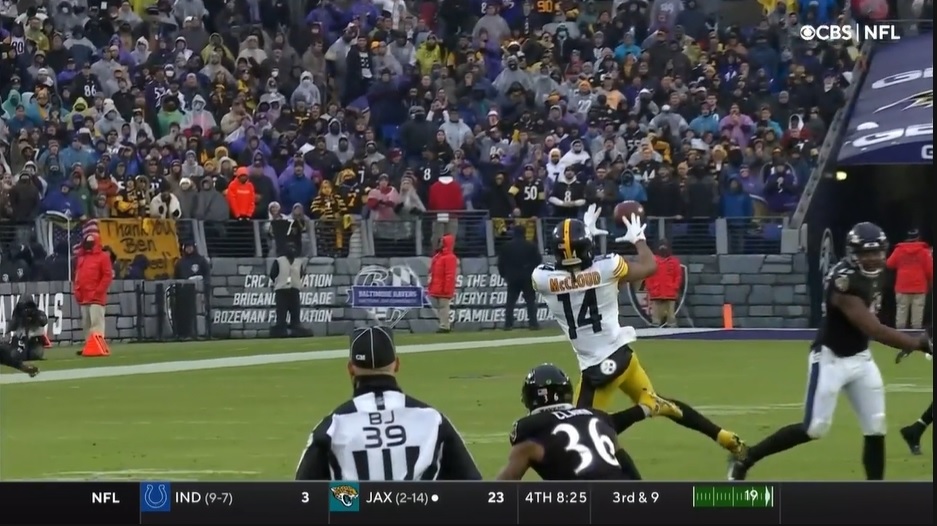 The Pittsburgh Steelers won a nail bitter Sunday against their arch-nemesis Baltimore Ravens, winning in overtime 16-13 on a walk off field goal by Chris Boswell. Pittsburgh needed to win this game in order to have a chance to make the postseason as the seventh and final seed in the AFC as well as have the Jacksonville Jaguars knock off the Indianapolis Colts at home and have the Los Angles Chargers and Las Vegas Raiders not end in a tie. The Jaguars took care of business early, getting up big on the Colts, setting Pittsburgh up to seek in if they’ll held up their end of the bargain.

In similar fashion to the trend that had been set by this team all season, Pittsburgh’s offense sputtered to start the game, failing to establish a running game after RB Najee Harris went out early due to an elbow injury. QB Ben Roethlisberger also struggled mightily in this one at the beginning, being off target on his throws and made poor decisions resulting in incomplete passes and a first half INT. However, after Baltimore took the lead, Pittsburgh got more into a rhythm and was able to maintain drives, setting this classic rivalry for a down-to-the-wire finish Steelers-Ravens seemingly always does.

WR #14 Ray-Ray McCloud came up big in this game, returning three kicks for 66 yards (22.0 AVG), two punts for 29 yards (14.5 AVG) and caught four passes on nine targets for 37 yards. The stats may seem underwhelming, but the impact of these plays McCloud made cannot go understated. He has been on the receiving end of the jokes this season for many stating he isn’t a capable slot receiver and profiles more as a gadget guy, and we saw that in the first half on lone reception before intermission, catching a screen pass on third-and-long and turns up field to get what he can, being well-short of the sticks.

However, McCloud was able to assist Pittsburgh with good field position for most of the contest in the return game. He displayed good vision and change of direction skills, seeing holes open in front of him and get up the field to pick up solid yardage. Take a look at this kickoff return where McCloud cuts to his right on the first man and then jumps out of a tackle attempt to his ankles, picking up nearly ten extra yards from where the first man comes in on him.

McCloud showed similar burst and awareness on this punt return later in the 4th quarter, finding the hole and hits it with speed, accelerating past several Ravens as he eventually gets wrapped up near midfield, but carries several coverage men at the end of the play for additional yardage.

While McCloud only had 37 yards on the afternoon, he made two clutch receptions that moved the sticks to helps Pittsburgh convert on two scoring drives. The first reception comes on third-and-nine right after a penalty by #77 John Leglue. McCloud lines up to the right side of the formation and a skinny post concept to the hole in the zone coverage in the middle of the field. Roethlisberger fires the ball into the hole, placing hit high making McCloud elevate into the air to come down with the grab. He takes a big shot by #30 Chris Westry as he comes to the ground but holds onto the football to move the chains.

The next play I want to highlight is the catch that McCloud didn’t make. Pittsburgh is driving in overtime to get into field goal range to win the game and Ben throws to McCloud on second down as McCloud works the middle of the field on post/deep over concept. The throw is low to the ground as McCloud tries to reel in the grab, initially keeping the ball from hitting the grass, but the ball comes loose as he slides, resulting in the incompletion.

Just two plays later, McCloud comes up with potentially the play of the game that seals it for Pittsburgh. On fourth-and-eight, Mike Tomlin elects to go for it rather than kick the 60-yard field goal. Ben drops back to pass as McCloud comes from the slot on the left side, running right on the backside of #88 Pat Freiermuth who carries the defender vertical on setting up McCloud to come open on the in-braking route. Ben again throws the ball low to the grass, but McCloud gets his hands underneath it, keeping the ball from hitting the ground and manages to keep moving in a backpedal to make sure he picks up the first down to put the ball in field goal range.

Ray-Ray McCloud may not be the slot receiver of the future for Pittsburgh, but he stepped up big when they needed him most to keep the Steelers’ postseason dreams alive. The Raiders took care of business late Sunday night, preventing the tie and won in overtime to solidify Pittsburgh’s spot in the playoffs. McCloud got it done both as a receiver and returner in this one, giving the offense good starting field position on several occasions and made the pivotal plays to move the offense into scoring range for the victory. It remains to be seen what McCloud’s role will be for this team moving forward, but as of Sunday, he is one of the stars of the game that put Pittsburgh in the postseason.