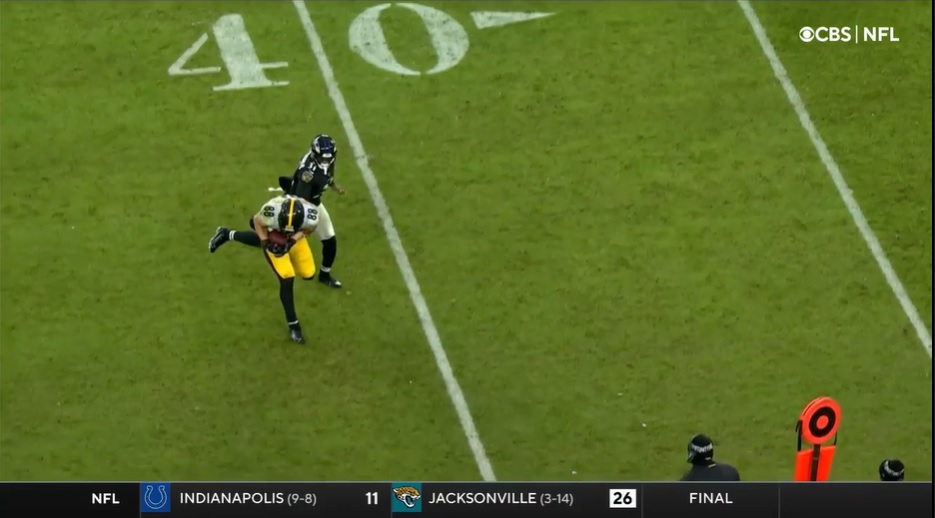 Pat Freiermuth has been a revelation for the Steelers in his rookie season. He’s the best tight end since Heath Miller and we know how much Steeler fans love their tight ends. Muuuuth has become one of Ben’s most dependable targets, and after a quiet first half Sunday, he came up big late.

Let’s take a look at the film:

The first clip is taken from a 2nd and long play in the first half. The Steelers ran a counter play, pulling Leglue and Freiermuth as lead blockers. Freiermuth is responsible for #36 Chuck Clark but as he led through the hole, he hesitated, and this resulted in Clark being unblocked to make the tackle. Coming out of Penn State, Freiermuth was not an established blocker, and although this isn’t his best rep, he has worked hard to improve this.

On the very next play Freiermuth had his first reception of the game. The Steelers align in a Trips bunch look. Pat Freiermuth and Ray Ray McCloud use a switch release, which is then followed by a shallow in-breaking route from Freiermuth, with McCloud running a deeper in-breaking route behind him. Ben makes space in the pocket and completes the ball to Freiermuth for the first down. Freiermuth has really good hands and always does a great job catching the ball away from his body.

Freiermuth had a much larger role in the offense in the second half. This started with springing Chase Claypool on an end-around on the first offensive drive. Freiermuth led behind the line of scrimmage and kicked out Ravens outside linebacker Justin Houston, creating a seam for Claypool to gain a first down.

My favorite part about Freiermuth’s game is his ability to gain yards after contact. Whilst he is not the biggest or the fastest he is consistently able to break tackles. On this next play Freiermuth catches the ball on a flat route at the 42-yard line. Although there are two defenders in his face, he makes both of them miss and gets down to the 34-yard line.

On this next clip the Steelers come out in a trey look (TE + 2 receivers) into the boundary and run a flood concept. This is a 3-level vertical stretch to the outside, with Freiermuth running the underneath flat route at roughly seven yards. What I really like about this play is Freiermuth’s intelligence breaking back towards Ben to reduce the distance on the throw and prevent the defender from breaking up the pass. He was also still able to break the tackle, and the play resulted in another Steelers’ first down.

Freiermuth had a number of clutch catches late in Sunday’s victory, one of which was this grab in the red zone to bring up first and goal. This play led to Chase Claypool’s late go-ahead touchdown. Freiermuth is aligned in the slot to the boundary. He runs a stick route and catches the ball at the 10-yard line. Freiermuth was again able to force a missed tackle, this time by Patrick Queen, and carry the Steelers inside the five.

Freiermuth caught quite a bit of heat from Mike Tomlin on this next play. On third down late in the game Ben again targeted Freiermuth, and although he was able to make the catch, he ran out of bounds short of the line to gain. Freiermuth has to do a better job of understanding the situation on the field, and in this instance gaining the first down was more important than stopping the clock.

The final clip comes from overtime. The Steelers ran a fade/out vs. the Ravens Cover 2 Man coverage. Tony Jefferson, the defender covering Freiermuth, utilizes trail technique, as he has help over the top. Ben was able to put the ball into a really tight window, and Freiermuth showed off his solid hands before gaining more yards up the sideline, taking the Steelers towards field goal range.

Freiermuth has been one of the few bright sparks in the 2021 Steelers offense, and although he’s had some gut-wrenching plays this season (the OT fumble vs. the Lions when the Steelers were in FG range and the drop in the end zone vs. the Vikings as time expired), his good has far outweighed his bad. It’s clear from Sunday that Ben still trusts him in those key moments, and he is showing Ben and the Steelers why. Let’s hope he can remain a big part of the offense this postseason, however long it may be.