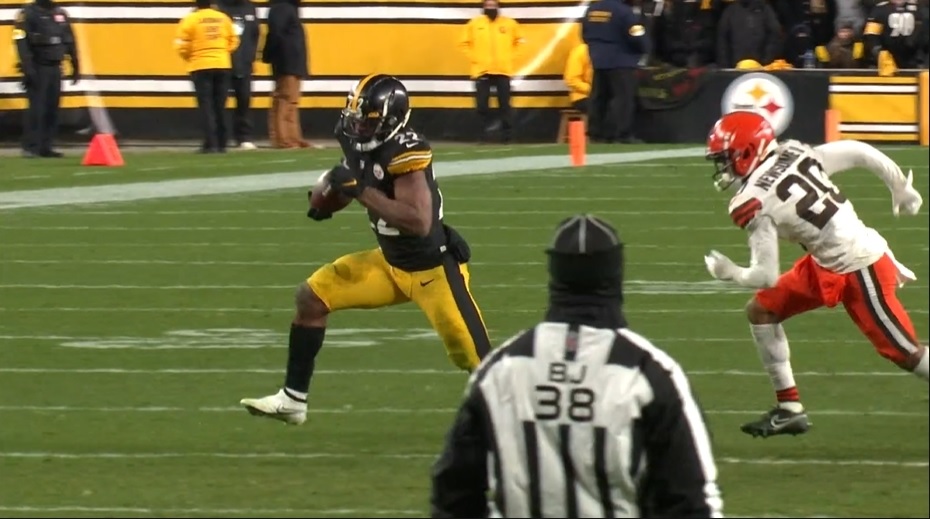 In the Pittsburgh Steelers’ biggest game of the year, both to keep their slim playoff hopes alive and to send Ben Roethlisberger out on the right note, the Steelers’ turned back the clock. 2021’s win looked a lot like a 2004 highlight. Run the ball, play great defense, ask your quarterback not to make the big mistake.

Pittsburgh ran for 190 yards in Monday’s win over the Cleveland Browns, their most in over four years. Najee Harris put on a show, a career-high 188 of those 190, setting a record for most rushing yards in a single game by a Steelers’ rookie. And according to Next Gen Stats, 181 of those came after contact, an absurdly high number.

All the traits that got him drafted were on display. But overall, the effort he showed put him over the top. The effort and finish he played with in Week 17 aren’t anything new. In fact, Harris has arguably been the top effort guy on this offense all season. It finally paid off in the win.

What struck me the most in this game was Harris’ ability to move the pile. To finish with an extra two, three, five yards after contact, dragging Browns defenders with him. Again, not a new thing, but it felt a little more obvious and impactful in a game where he had more running lanes than usual. The four-yard run that turns into seven feels a little more substantial than the one-yard run that turns into three.

I put together a cut-up of just a couple of Harris’ pile-moving runs against the Browns’ Monday night. Watch the leg drive, the churn, the ability to move that pile and pick up additional YAC. Harris did it all night. When the Browns went high, he carried them along. When they went low, he stepped through the tackle.

I’ve added a separate clip below that shows his finish but also his lateral agility that has been on display the latter half of the season. Inside zone run. Bang read between defenders and he bursts into the second level against the safety coming downhill, #22 Grant Delpit.

Harris puts his foot in the ground and cuts to his right, forcing Delpit to attempt a diving, low tackle. Harris is easily able to keep his feet with good contact balance and continue to run his feet through the play, picking up another six yards after initially being wrapped around.

That what’s he done all season, but the fact he’s still able to do it despite the tremendous workload he’s been given is impressive.

As Harris said post-game, both of these runs are inside zone schemes. Here, Chase Claypool wraps inside TE Pat Freiermuth on the insert block. Harris is met with LB Anthony Walker (#4) unblocked. He’s able to show the burst to bounce this run outside, run through the CB (Chase Claypool may have gotten an arm into him too, I’m not sure), and Harris finds grass to the outside.

Claypool shows good effort to run with a linebacker downfield while Harris is 1v1 with DB M.J. Stewart, the kind of matchup the Steelers have been trying to get all year (and maybe one reason why Harris has been more bounce-happy in recent games, trying to create more of those chances). Harris throws a nasty stiff-arm into Stewart, taking his soul, sending him sprawling to the ground, and picking up additional yardage.

And here’s the dagger, the 37-yard run to seal it. Another inside zone scheme, a split zone type of action with FB Derek Watt pulling across to the EMOL. Unfortunately, we don’t get an All-22 look at the run like the 32-yarder, but here’s the broadcast view of the play.

You can see Harris again set up this run by pressing the middle before bouncing this run outside a gap and bursting into the open field. I love the speed at the end of the run. Harris isn’t known for his speed but he has the juice, maybe the conditoning, to outrun everyone to dive into the end zone.

We did get one replay of his run. Like the 32-yarder, Harris had an unblocked defender to worry about. But he ran through contact, showing that burst and acceleration to avoid getting hit hard at the second level. Maybe the way Harris pressed the hole put the linebacker slightly out of position.

Despite a tough, long rookie year, Harris has not slowed down. Instead, he’s gotten better and better and was at his best Monday night. And oh boy, did Pittsburgh need it.