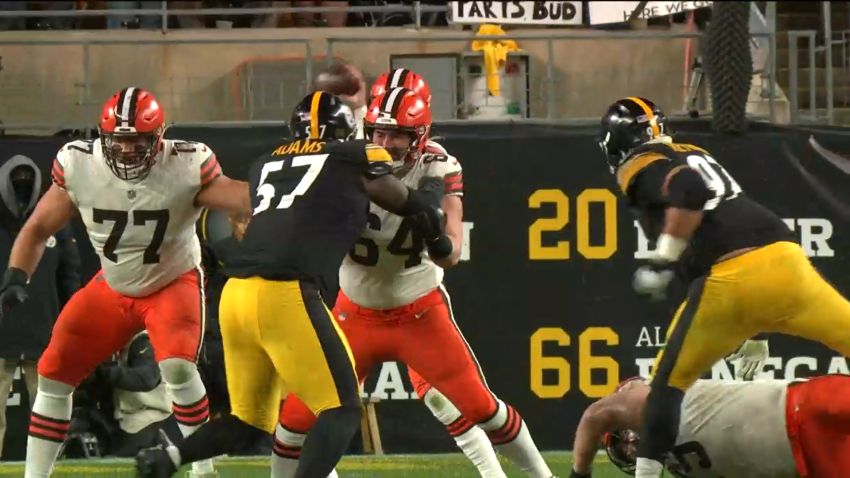 Following multiple injuries across the defensive line such as Tyson Alualu and Stephon Tuitt, the Steelers’ run defense has struggled this season. Alualu is one of the most underappreciated Steeler defenders. Isaiah Buggs who showed flashes late last season, and Carlos Davis have also missed a number of games due to injury. On November 30th the Steelers signed Montravius Adams to the active roster from the New Orleans Saints’ practice squad.

Adams, a third-round pick out of Auburn, was drafted by the Packers in 2017.

Since his addition he’s made a big impact on the Steelers defense.

Let’s take a look at some film from Monday Night’s victory vs. Cleveland.

The first clip is taken from the first defensive play of the game. Adams is aligned in a 0 technique head up over the center. He is responsible for the A gap on the right hand side and is playing a lag technique. His responsibility is to engage the center and play behind the block. This allows him to not only play his gap, but by not letting the center get to the second level, he allows Robert Spillane to come untouched through the left A gap for the tackle for loss. Spillane will get the plaudits here, but Adams allows the play to take place.

My favorite part about Adams’ game is that he never stops running. Earlier in his career he was accused of being lazy, but this is something I have not seen watching the tape. He has a great motor especially for such a big guy. On this play he is aligned in a 1 technique on the outside shoulder of the center. He rushes in the A gap and attracts a double team at the snap, with the center coming off to help against Cam Heyward. Adams continues to work upfield against Wyatt Teller and applies late pressure to Mayfield, resulting in an incompletion.

One of the weaknesses of Adams’ game is that he occasionally allows himself to get moved or washed down the line in the run game. At 6-4, 304, he is on the lighter side for an NFL nose tackle…in comparison, Brandon Williams of the Ravens comes in at 6-1, 335. Naturally, this makes it harder for Adams to play double teams. On this clip the Browns run wide zone and Adams gets a double team. He gets blocked roughly five yards downfield, and this allows Chubb to cut back for a small gain.

Despite Adams’ size, he moves very well. He is an effective interior pass rusher, using both an arm over move and a double swipe move shown below. Adams is aligned in a 2i, on the inside shoulder of Wyatt Teller, the guard. On the snap he provides a good fake outside, which freezes Teller, and he then comes back inside using a great double swipe move to clear Teller’s hands and get up the field to apply immediate pressure to Mayfield. Mayfield is flushed from the pocket and Adams chases, resulting in a short gain.

On this next play we see another example of Adams’ motor. The Browns utilize a pin and pull scheme to get offensive linemen out on the edge to create a numbers advantage to the three-TE side. Adams is double teamed and the run spills out to the sideline away from him. Many Steelers including Tuszka and Haden do a good job disrupting the play, and Adams, who was initially blocked, hustles down the line and delivers a big hit to Nick Chubb to end the play.

The next clip comes from later in the game, with the Browns in 2nd and long following a holding penalty. Cleveland attempted a screen pass to D’Ernest Johnson. Adams does a great job recognizing the screen and disrupts the play, covering Johnson and forcing the ball to be thrown at his feet for an incompletion. It was great to see Adams making plays using both the physical and mental aspects of the game.

This final play was not Adams’ best play of the night, but it was my favorite. This play demonstrates his non-stop hustle on each play. Adams is aligned in a 1 technique on the defensive left. The Steelers’ pass rush loses contain on Mayfield, and he escapes the pocket. As the nose tackle Adams should be one of if not the slowest player on the defense; however he outran almost all of the other Steelers on this play to give chase to Mayfield. These plays won’t show up on the stat sheet, but they are invaluable to a defense.

The Steelers will be hoping they’ve uncovered a hidden gem in Adams, and with the way he’s playing, it’s easy to see why. He’s not the finished product, but I would love to see him return in 2022 and beyond.