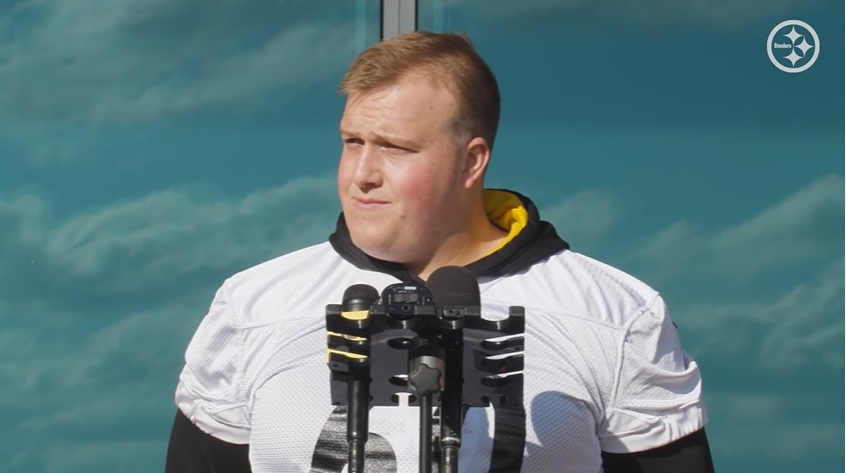 The Pittsburgh Steelers beat their division rival Cleveland Browns on Monday Night Football by a score of 26-14, getting QB Ben Roethlisberger the victory in his likely last game at Heinz Field. The running game looked revitalized in this one as Pittsburgh rushed for 190 yards on the night, the most they have had on the ground in over four seasons. Part of the praise will go to interim OL Coach Chris Morgan who took over duties after Adrian Klemm left for Oregon, implementing more of an inside zone-focused system, utilizing double teams to work to the second level to get RB #22 Najee Harris a chance to attack Cleveland up the middle.

Still, there is no denying that Harris ran with more conviction in this game, attacking the hole with less hesitancy than he had in previous weeks. The offensive line also must be given credit, springing Harris on a couple runs and giving him a chance to at least get to the LOS compared to previous weeks. C #60 J.C. Hassenauer was named the starter after Kendrick Green dealt with a calf injury all week, missing practice till Saturday and was listed as a break glass option for the contest.

With how well Harris run and the overall play upfront, one would imagine that Hassenauer far outplayed Green at the center spot. However, after diving into the tape, it appears less that Hassenauer had a stellar performance than that he managed to avoid the slew of mistakes that have plagued Green for most of the season. When you watch Hassnauer’s play Monday night, you are satisfied yet not stunned with his level of play. For instance, there were plenty of reps where Hassenauer gets driven back in the pocket against the pass rush like on this rep below where he doesn’t drop anchor and gives ground to power rushers. However, Hassenauer manages to stay in front of his man and avoid giving up sacks.

When it comes to the running game, it’s much of the same for Hassenauer who usually is in the right place but doesn’t always finish the run. For example, watch this inside run on the draw play where he chips the middle backer before climbing up to pick up #50 Jacob Phillips. Hassenauer is in position on Phillips’ inside shoulder to seal the running lane, but easily gets thrown off the block by Philips who wraps up Harris to end the run.

An issue that has been brought up heavily for Kendrick Green is his tendency to lose his footing and end up on the ground far too often. When you watch Hassenauer against Cleveland, you see a similar trend. Watch this run to the left where Hassenauer tries to cut of #58 Malik McDowell, running his body across his face as he can’t get to his outside shoulder and ultimately stumbles and falls to the grass, forcing Harris to cutback inside where he makes a man miss and turns the play into a solid gain.

Here is another example where he leaves his feet after getting shed by LB #28 Jeremiah Owusu-Koramoah. However, Hassenauer does a good job off the snap, engaging JOK and kicks him out to clear a running lane for Harris up the middle before getting chucked. Being listed at 6’2, 265lb, Hassenauer lacks the ideal size and strength to consistently win at the point of attack, and its shows here while on a successful run.

The way to best describe Hassenaur’s performance Monday night would be that he did just enough to get the job done. As HC Mike Tomlin says, “Style points don’t matter in football.” Hassenauer would agree, as plenty of his reps weren’t pretty, but he managed to execute. For example, watch this play where Hassenauer blocks the down defensive lineman upon the snap, jostling for position and gets a little drive off the LOS, eventually allowing the defender to cross his face and make the tackle after he cedes ground to Hassenauer who finishes on top of him for good measure.

However, to his credit, some reps were better than others from a style points perspective. For instance, this play shows Hassenauer doing a great job picking up S #22 Grant Delpit coming downhill, running him out of the play as Harris runs up the middle for a modest gain.

Here’s another example where Hassenauer shows us some savvy as a blocker, giving ground initially to #96 Jordan Elliott, proceeding to turn his shoulders inside, thus creating a seal on his backside that Harris exploits to break the LOS and get to the second level.

All that being said, Najee Harris’s highlight run of the night could be said the same for Hassenauer. Watch on this 37-yard TD run where he snaps the ball and tries to cross face of RDT, losing his footing immediately as the defender sheds him and gets a hand on Harris as he cuts back, exploiting a great block by FB #44 Derek Watt to get into open space and take it to the house.

In no means am I trying to bash Hassenauer for his performance, as this was likely the best performance by the center position in the last several games. Rather, I’m reiterating Dave Bryan’s point on the Terrible podcast that Hassenauer should be up for the Pro Bowl after this game as his play was far from spectacular. He managed to execute his assignment more often than not, but still showed issues with ack of size and strength as well as the footing issues his teammate Green has displayed all season.

The difference is that Hassenauer was more consistent than Green, executing at a higher rate with less mental errors than Green has for most of the season. Hassenauer is what he is, a solid backup center that can also play guard in a pinch that knows what he is supposed to do but lacks that upside higher caliber players at the position possess to be considered a starting-caliber player.

Personally, Hassenauer has earned the right to start Pittsburgh’s final regular season game against Baltimore and any other game Pittsburgh could have should they somehow make it to the playoffs. However, I am in agreement with the majority in saying the center of the future currently isn’t on the roster, as the Steelers should look to find a quality starting option this offseason in the draft or free agency and have Hassenauer be that depth piece he is best suited for going forward.

What are your thoughts on J.C. Hassenauer’s performance Monday night? Do you think that he drastically outplayed Kendrick Green and deserves to start the rest of the season? What is his best role for the team moving forward? Please leave your thoughts in the comments section below and thanks again for reading!