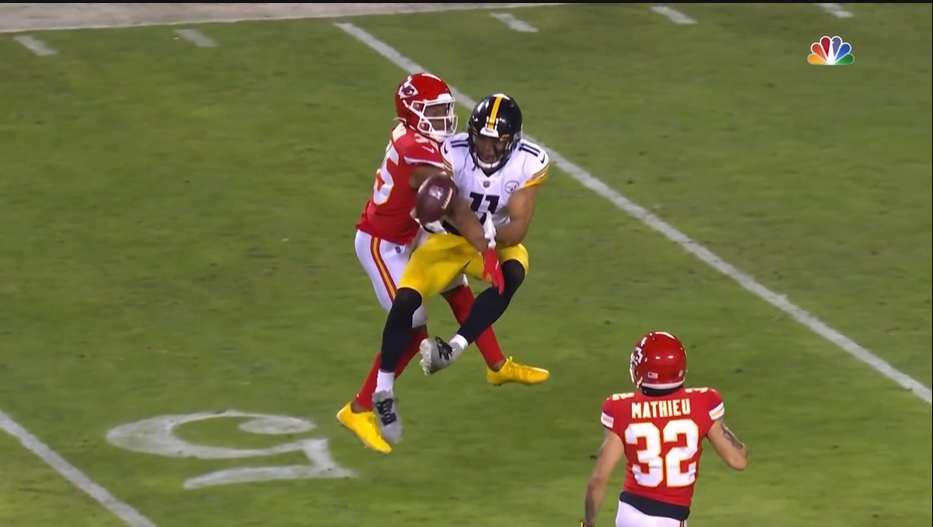 The Pittsburgh Steelers got pummeled by the Kansas City Chiefs Sunday night, losing the game 42-21 in a laugher. Much like the Week 16 matchup, the offense failed to get anything going early in the game, only seeing success after the Chiefs built up a big league into the second half, allowing Pittsburgh to get small chucks of yardage while defending the big play. This isn’t to say that Pittsburgh didn’t take their shots downfield, but rather that they failed to connect to make an explosive play.

WR #11 Chase Claypool was drafted in the second-round last year to be that receiver that Pittsburgh was lacking, a height/weight/speed specimen with the size and athleticism to win combative catches down the field and beat defensive backs in man coverage to produce explosive plays in the passing game. Claypool flashed as a rookie, scoring 13 TDs (including their playoff loss to Cleveland), being utilized down the field as well as in run-after-catch opportunities. However, 2021 has been a quest season for Claypool as he totaled two TDs on the season as he failed to convert several contested catch opportunities.

Dave Bryan and Alex Kozora have mentioned several times on The Terrible Podcast that Claypool needs to convert on more of those combative catches for a guy that stands 6’4, 238lb. Despite his freakish size and leaping ability, he plays like a smaller receiver at the catch point than expected, losing jump ball opportunities in situations you would expect him to win. For instance, Claypool’s first target of the game comes on a deep shot down the middle of the field by Ben Roethlisberger where Claypool gets a good inside release on the CB with the arm over, getting a step on the coverage and has the ball come into his hands as #35 Charvarius Ward breaks up the pass.

It would have been a tough ask for Claypool to make this catch with the defender getting a hand in there, but with the ball in his hands, you like to see him make that play. Here is a similar instance later in the quarter where Claypool fights with Ward up the sideline on the third down deep shot but can’t get back inside to the pass thrown low and a little behind him. To Claypool’s credit, he does go to the ground attempting to make the grab but is unable to save it from hitting the turf.

So, the first two incompletions on deep shots to Claypool can be vetted depending how you look at the play. However, this last incompletion on a deep shot falls on Claypool’s inability to bring in the ball. Claypool runs up the left sideline on third down, getting off press coverage by #21 Mike Hughes. He gets a step on the defender and elevates for the football in the air, trying to high-point the ball, but watches to ball go through his hands. Granted, it is a difficult catch to make up in the air, but Claypool appears to be falling back on the attempt rather than jumping straight up which has been an issue for him for much of the season.

It’s frustrating to watch the misses and lapses of maturity from Claypool because of the physical talent he possesses. The second-year receiver is in a similar physical mold as D.K. Metcalf and Calvin Johnson (although lacking that deep speed) and can impose his will on smaller defenders. For example, Claypool’s first reception of the game comes on this second-and-long situation where Claypool gets and inside release on the corner in coverage and boxes him out on the in-braking pattern, catching the ball through contact for the first down to move the chains.

Here is a similar play where Claypool catches a short slant over the middle, evading the tackle attempt by LB #53 Anthony Hitchens and gets up field for a couple extra yards before being tackled by multiple defenders.

Claypool makes a similar play in the fourth quarter on this whip route to the right sideline, taking advantage of the off coverage by the defensive back by catching the ball in space and makes Ward miss in space as he fights for the first down, keeping his legs running as he gets wrapped up by three defenders attempting to bring him down.

To Claypool’s credit, the attitude and maturity issues that seemed to plaque him during the middle of the season have quieted down after the backlash he took following the Thursday night loss in Minnesota. However, whether it be his inability to win more on the outside down the field or complete more of those combative catch situations, both his impact and percentage of snaps played fell off Sunday night in Kansas City. Claypool finished the game with three receptions on seven targets for a whopping 25 yards, playing 65% of the snaps. For reference, JuJu Smith-Schuster played more snaps than Claypool coming off missing more than three months due to shoulder surgery while James Washington ate into Claypool’s snaps in the second half.

To Washington’s credit, he was able to be successful where Claypool wasn’t making two contested catches in traffic with one being a 15-yard score. For those keeping track at home, Washington stands at 5’11, 213lb, beating the same cornerbacks in coverage Claypool is facing while standing nearly half a foot taller and having 20lb more on him. Dave Bryan has actively criticized Claypool for his lack of ability to stack receivers at the top of his route an in vertically, and I am with him on that. I too had Claypool graded as a third-round prospect seeing a receiver that had the ability to with the jump ball and catch short passes and create after the catch.

Outside of the long TD against Denver last season, that is where Claypool primarily has made his impact in the league to date, catching short passes and breaking them into big gains after the catch or getting out in space of WR reverses and screens. Still, the lack of execution at winning more contested catches is concerning as this should be his bread and butter, feeling like the team can be wasting targets throwing it up to him if he fails to come down with it more often. Heading into Year Three, Claypool will be in a crucial point in his young career, needing to rebound after a sophomore slump.

Better utilization with an offensive system that can use is side and YAC ability like say Deebo Samuel of the 49ers would be an intriguing way to maximize his physical prowess and skill set. However, Claypool must show that he wants to be a better professional and work on improving his game much like Diontae Johnson improved from Year Two to Year Three, becoming a more consistent and reliable member of the receiving core for whoever is under center next season. Should Claypool fail to inspire confidence in his development to the team, Pittsburgh may be forced to draft yet another receiver high in this upcoming draft with their potential losses coming in free agency as well as lack of trust in Claypool progressing.

What are your thoughts on Chase Claypool’s performance against the Chiefs and this season as a whole? Was it a disappointing season for the second year wide out? Do you attribute the blame to Claypool, to the offensive system/QB, or a combination of both? What do you think his future is in Pittsburgh going into next season in terms of his development and ability to achieve the upside he has? Please leave your thoughts in the comments section below and thanks again for reading!