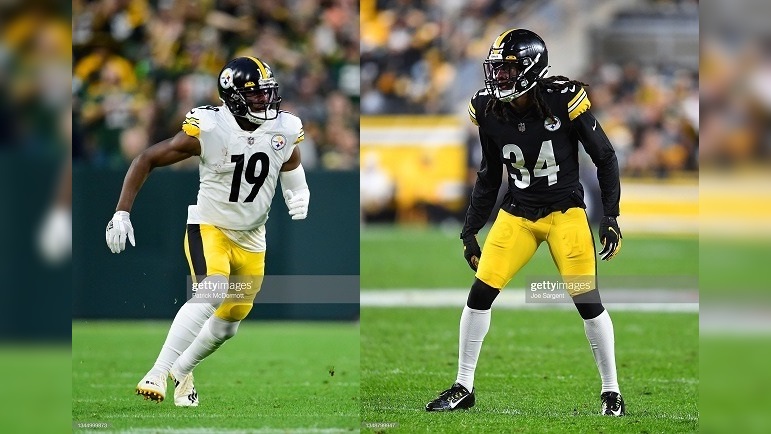 The Pittsburgh Steelers currently have 17 players scheduled to become unrestricted free agents this offseason, and two of those players made ESPN’s top 50 list.

On Tuesday, Kevin Seifert of ESPN ranked the top 50 soon-to-be unrestricted free agents of the 2022 offseason, and Steelers wide receiver JuJu Smith-Schuster and safety Terrell Edmunds both made the list.

Smith-Schuster is ranked 42nd overall on Seifert’s list of 50 players, and below is what he wrote about the Steelers’ former second-round draft pick out of USC, who missed most of the 2021 season due to a shoulder injury.

If Smith-Schuster was disappointed with the interest he received on the market last offseason, what will he think now after a shoulder injury limited him to five games? He is now three seasons removed from his lone 1,000-yard season and has averaged 8.6 yards per reception over the past two years. On the other hand, he is still young for a player who has been in the league for five seasons, and his low production should be considered in the context of quarterback Ben Roethlisberger’s declining downfield arm strength.

So, what is Smith-Schuster’s market value for the upcoming offseason? That’s a great question. The Steelers paid him $8 million in 2021 for 15 receptions for 129 yards. Smith-Schuster did make it back from his shoulder injury to play in the team’s lone playoff game, and managed to catch another five passes for 26 yards. If the Steelers really want Smith-Schuster back in 2022, they should be able to easily afford him from a salary cap perspective.

Who the Steelers quarterback is in 2022 will also likely play a part in Smith-Schuster’s offseason decision in addition to his perceived market value and what the Pittsburgh is willing to pay him. There is already a report surfacing that Smith-Schuster is open to signing with the Kanas City Chiefs during the offseason. They, along with the Baltimore Ravens, made an attempt to sign him last offseason. His offseason situation will once again be an interesting one to watch play out again.

As for Edmunds, Seifert has him ranked at the bottom at 50th overall. Below are his thoughts on the Steelers’ former first-round draft pick out of Virginia Tech, who did not have his fifth-year option picked up by the team last offseason.

Edmunds is not the most well-known of the Steelers’ starting safeties, and he’s not the most talented, either. (Minkah Fitzpatrick holds both of those titles.) The Steelers, in fact, declined Edmunds’ fifth-year option last spring. But he had his best season in 2021, starting all 17 games and setting a career high with eight tackles for loss. Even so, the Steelers might not be able to clear up much cap space to re-sign Edmunds, assuming they want to re-sign Fitzpatrick next year.

Seifert is way off the mark here in his quick blurb. The Steelers will have as much offseason salary cap space that they deem they need to have this offseason. Using Fitzpatrick’s contract situation is a reason why Edmunds might not be re-signed is quite silly. So, what does it boil down to with Edmunds? Market value and want.

It’s not hard to imagine the Steelers wanting to re-sign Edmunds ahead of the start of free agency, especially if he really wants to return on a two-year contract with a new money average of less than $6 million. Will there be another team willing to pay Edmunds more than that? It’s possible. If he does leave via free agency, the Steelers will have a strong safety hole to fill either via the draft or free agency.

Will one or both of Smith-Schuster and Edmunds be back with the Steelers on new contracts this offseason? Do both belong in Seifert’s top 50 list? Let me know your thoughts in the comments below.