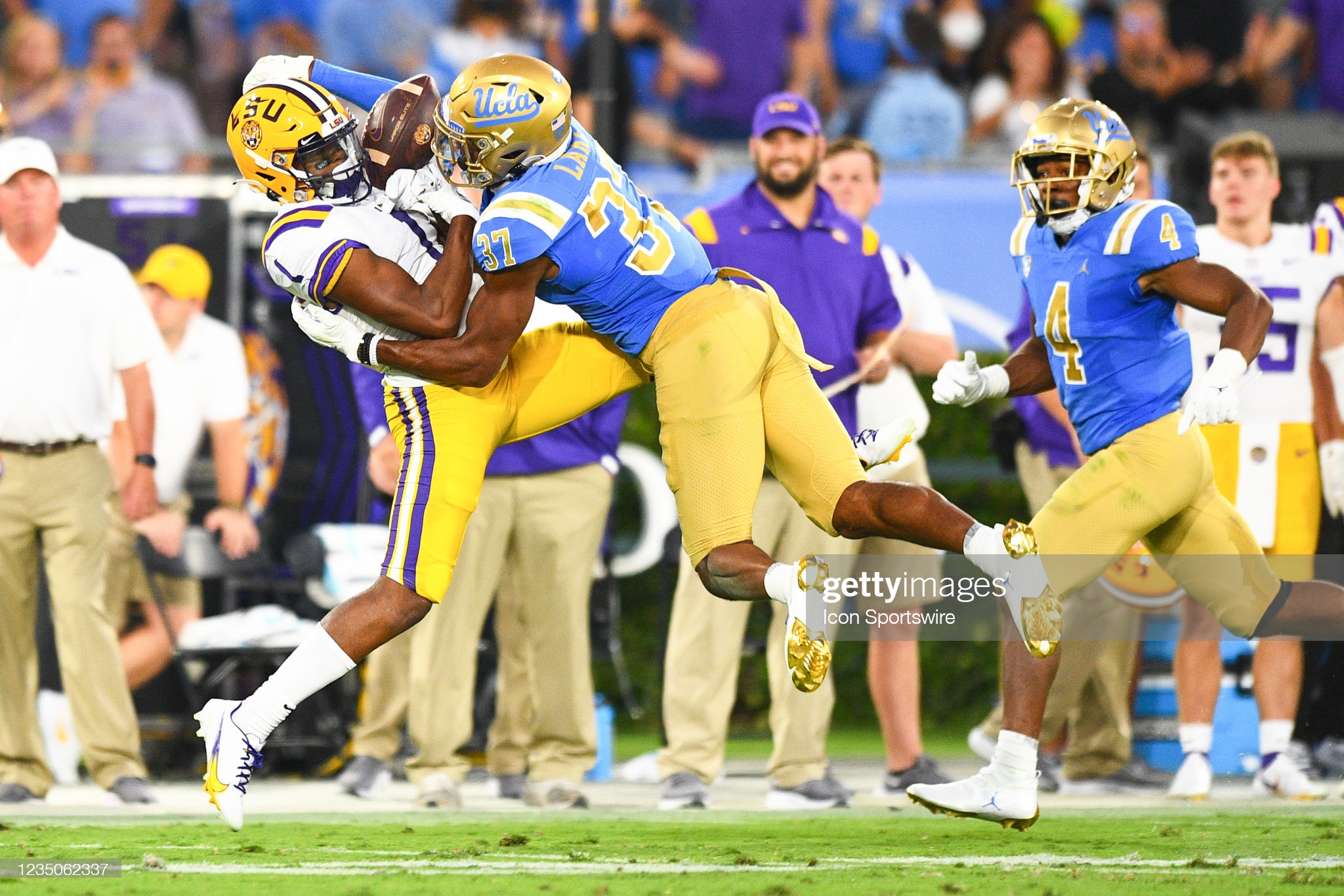 Things have an odd way of coming full circle in life. Typically, one finds themselves right where they’re supposed to be in the end.

For UCLA safety Quentin Lake, who is here in Las Vegas for the East-West Shrine Bowl, there’s one true place in life at the next level that could be that coming of full circle: the Steel City as a member of the Pittsburgh Steelers.

If Lake, a 6-foot-1, 201-pound safety, has his personal wishes come true, a number of Steelers fans will be busting out their old Lake 37 black and gold jerseys once again, considering the UCLA standout is the son of a famous former Steelers player and coach. You probably know him well. Heard of Carnell Lake?

Watching Lake at UCLA in recent seasons, you can see a lot of his father in his game. Though Lake is more of a safety/nickel hybrid dime backer combination that fits today’s game compared to the role Carnell played with the Steelers from 1989-98, the two are stylistically similar. For the son of an NFL Pro Bowler in Carnell Lake, the comparison to his father can get a bit old, one would think.

That’s not the case for Quentin, who is embracing it and taking it as a challenge to carve his own path but also live up to the expectations. Not only that, Quentin has a guy who’s played football at the highest level in his corner, helping him learn the game at a fast rate, putting him ahead of the curve in the draft process.

“Yeah…I love the comparison. First and foremost, I love it, because it’s a challenge. Obviously you have to live up to a certain expectation. He set up set the bar high, you know, congratulations to him, but you know, it’s been awesome,” Lake said during a sit-down interview with the Steelers Depot crew Saturday inside The Velvet Lounge at Luxor Hotel & Casino. “In terms of my game and what he’s taught me and stuff like that, you know, he’s been a big influence on my life, more so not necessarily on the physical side, but the mental side. What to look at, what are offensive formations? What are offensive tendencies? Alignments, assign with your assignment and all the technique stuff. It’s been a big help. We’ve been going over football probably in the past two years more than my whole life because it’s becoming a profession now.

“So it’s been awesome. But yeah, he’s been a big help in terms of my game, on the mental side, for sure.”

Not only did it help Lake develop into an NFL-caliber safety at this point in his career, being the son of a not only a former standout defensive back in the NFL but also the son of an NFL coach provided Quentin some great experiences in life.

While Carnell was the defensive backs coach in Pittsburgh from 2011-2017, Quentin was able to be around the team as much as he could while still playing college football in California. Being able to experience an NFL locker room, meeting professional athletes and seeing up close and personal what it takes in today’s day and age to be a professional athlete helped the UCLA standout develop along the way.

“I didn’t get to spend as much time [around the Steelers] as I wanted to just because I was still in high school, still going through high school football and stuff like that,” Lake said. “But the times that I could, it was awesome. Being able to meet the players, I met Coach [Mike] Tomlin, met Ben [Roethlisberger], met a bunch of guys…AB [Antonio Brown] when he was on the team.

“So, you know, it was an awesome experience to be around the team,” Lake added. “Obviously you wanna be around the team more, because it’s such a fun environment, especially when you’re a high school kid looking up to, you know, some of your idols and stuff like that. But it was awesome. I had a great time when I was over there, but not a lot, not as much as I wanted for sure.”

It can be rather easy to connect Quentin to the Steelers simply due to the bloodline, which is what the Steelers tend to like when looking at younger players, but there’s also the need at safety and in the nickel. With a strong week, Quentin will continue to turn some heads and raise some eyebrows throughout the draft process.

There’s one place he’d love to land though.