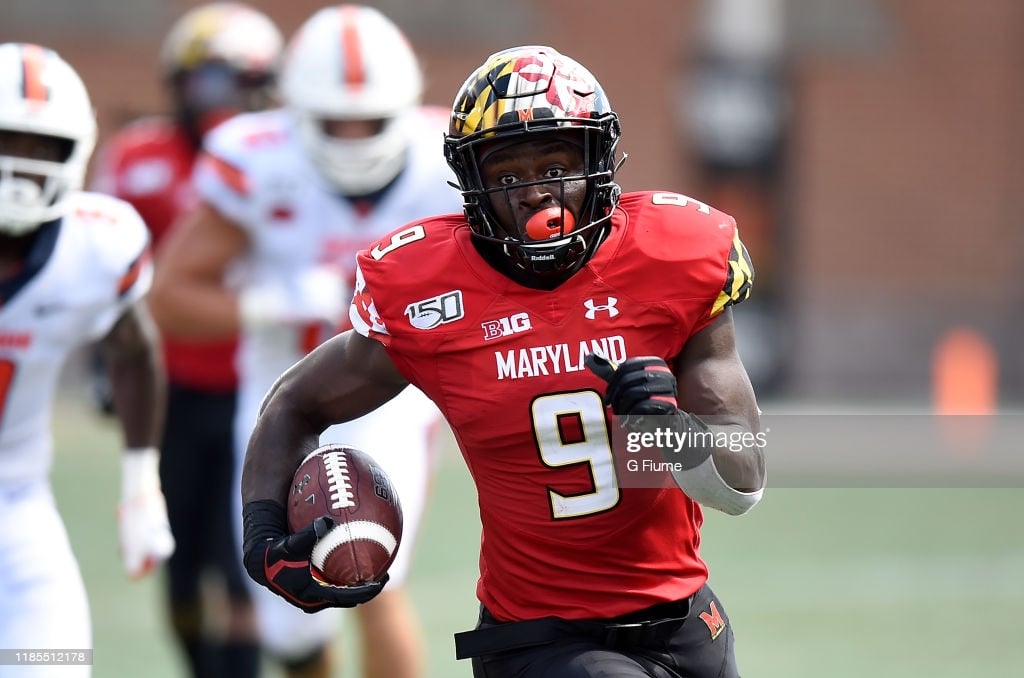 As we move further and further into Draft Season here at Steelers Depot, it’s likely the final time we’ll get to really, truly connect the dots from a draft perspective with the Pittsburgh Steelers, at least for a few years.

With the news of General Manager Kevin Colbert stepping away after the 2022 NFL Draft officially landing Friday from Art Rooney II, plenty of change is ahead as the Steelers will have a new GM for the first time officially since 2010, and a new man in charge on the football side since 2000. That may seem confusing to many, but Colbert became the official GM in 2010 after holding down the role of Director of Football Operations.

For now though, we’ll continue to connect the dots and read the tea leaves to try and get a grasp on what the Steelers might consider doing in the draft, and what players they might be looking at.

Here at the East-West Shrine Bowl in Las Vegas, one player that was an easy dot to connect with is Maryland tight end Chigoziem “Chig” Okonkwo. Sure, the Steelers might not “need” a tight end in the 2022 NFL Draft after selecting Pat Freiermuth in the second round in 2021, and the continued development of Zach Gentry and Kevin Rader, but Okonkwo is an intriguing height/weight/speed guy with one very intriguing connection to the Steelers: playing under now-Steelers’ offensive coordinator Matt Canada for one season in 2018.

Okonkwo sat down with myself, Melaine Friedlander and Owen Straley inside The Velvet Room — doubling as The Players’ Lounge — inside the Luxor Hotel & Casino Friday and gave his thoughts on Canada and his offense, the type of system he sees himself as a fit in, and the tight ends he tries to model his game after.

As a freshman in 2018, Okonkwo stepped into a rather rough situation at Maryland, which fired head coach DJ Durkin following the death of then freshman offensive lineman Jordan McNair after a spring workout.

That decision inserted Canada — then the offensive coordinator in his first year in College Park — into the role of interim head coach. That season, Okonkwo didn’t have a major impact as he touched the football just eight times offensively. However, he scored four touchdowns — three on jet sweeps, including a long of 54 yards, showing how versatile and explosive he could be in Canada’s system.

“I remember him being just an awesome coach, because coming in he inherited a very, very bad, tough situation,” Okonwko said. “And just the way he rallied the guys around him and he was just…he epitomized everything that you wanted in an interim head coach to come in and do. He just got everybody on the same page.

“He told us how it was. He just told us like the truth of how it was gonna be. He said he doesn’t know how long he’s here, but we’re gonna work and we’re gonna do everything the right way. And everybody just trusted him. We remembered that we just got to work. Yeah, I have a lot of cool memories [of Canada].”

Canada did a nice job in Maryland as the interim head coach, leading the Terrapins to a 5-7 record, including a 5-3 mark before Halloween, then proceeding to lose four straight, including a 52-51 loss in overtime to then-No. 9 Ohio State.

Despite the limited playing time as a freshman, Okonkwo enjoyed Canada’s scheme, which isn’t one we’ve fully seen in Pittsburgh just yet, for obvious personnel reasons.

“Oh, that [Canada] offense was very interesting, because coming outta high school, you know, being in a spread offense just right there always running routes, catching the ball. But coming to his offense? I’m scoring more on jet sweeps than I am catching the ball, so that was fun,” Okonkwo said. “You know, that was the last time I really got to sit there and run jet sweeps and really get the ball like that.

“It’s a lot of motion, I remember. I can remember a lot of pre-snap motion, a lot of decoy stuff, you know, to get the defense on their toes,” Okonkwo added. “Sometimes like, we know we’re not really doing anything with the motion. We’re just doing it…it’s just there to get the defense think, ‘man, what are they doing?’ We’re really just running the most simple play in football. We always had to get out the huddle, you rush the huddle as fast as you can, you know, keep the defense on their toes, and that was it. A lot of running, a lot of rushing, a rushing attack.”

After Canada left Maryland and took a year off before joining the Pittsburgh Steelers, Okonkwo found himself under the guidance of an offensive-minded head coach, this time in the form of Mike Locksley.

In two years under Locksley — Okonkwo sat out the 2020 season while dealing with myocarditis — Okonkwo finished with 71 catches for 648 yards and seven touchdowns, including a line of 52/447/5 as a senior. Okonkwo had an impressive senior season, including career performances against Penn State and Michigan State in which he set career highs in receptions against the Nittany Lions (12) and yards against the Spartans (112), which happened to be the highest yardage total for a tight end in Maryland history since Vernon Davis recorded 139 yards in a game against North Carolina in 2005.

A former wide receiver early in his career, Okonkwo has the ability to be that move-style tight end teams seem to covet in today’s NFL, one that can line up in the slot or as that detached tight end in the formation that can win outside the hashmarks. That said, Okonkwo takes pride in being able to put his hand in the dirt and mixing it up in the trenches.

“I do now that I’ve progressed to where I am [as a blocker],” Okonkwo said. “Maybe like my freshman year, if you asked me that question, I would say heck no. Like, no way. I would rather be standing up running routes. But like now, since I put on the frame, put on the weight and just understand and got my football intelligence up and understand the game better, I feel like, yeah, I’m very comfortable with my hand in the dirt blocking guys.”

Maryland TE Chigoziem Okonkwo is a name you all should watch for once we get into Shrine Bowl practices (starting tomorrow).

Blocks his ass off as a Y. They trusted him to handle edges in pass pro all on his own and was very good at it. Really strong at POA. I like him a lot.

He certainly prefers to play in space though, utilizing his stronger traits, those being his size, speed and ability after the catch.

“The strength of my game is definitely being a mismatch and then having the ball in my hand, you know, right after catch, I feel like I can always get by the first defender,” Okonkwo said. “Like, I’m always a hard person to bring down. So definitely I bring a lot of toughness to a room, I’m a blocking mismatch, being against a linebacker or safety and just getting those matchups, and just being a threat in the game in general.”

We’ll definitely have a draft profile on Okonkwo here in the coming weeks here at Steelers Depot, and we’ll definitely provide updates on the Maryland tight end through the rest of the week. He’s an intriguing offensive weapon to watch moving forward.