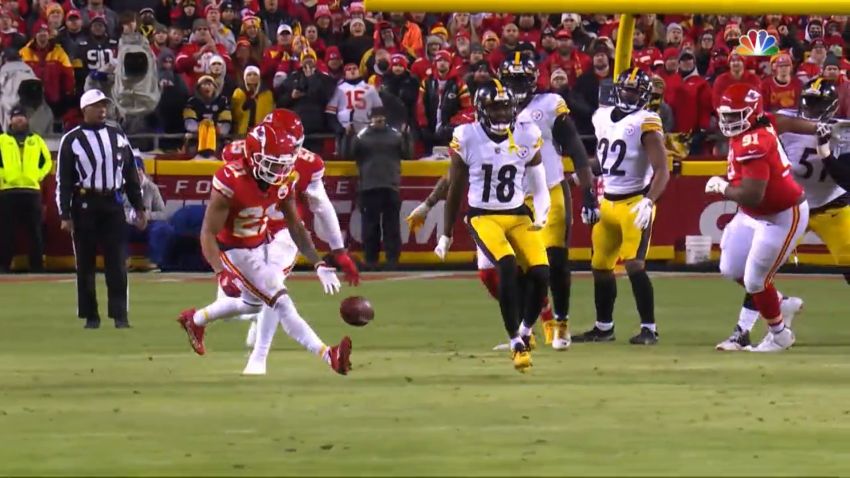 On the biggest of stages, Johnson’s issues catching the football came back in a big way as Johnson dropped at least two passes on Sunday night, then had a false start right after a drop and effectively stalled at least two Steelers’ drives, one of which led to Travis Kelce’s 48-yard touchdown right before the half, kick-starting the Chiefs’ rout.

Johnson did bounce back nicely with a late touchdown catch, finishing with five catches for 34 yards and the score, but he left some plays on the field, which has drawn the ire of the fanbase once again.

That doesn’t have Johnson worried, though, because he believes in the work he put in ahead of the 2021 season and saw that hard work pay off in a major way as he eclipsed the 100-catch plateau and showed signs of being a true No. 1 wide receiver in the NFL. He says he still has things to work on though this offseason.

“I wouldn’t just pinpoint one thing,” Johnson said to reporters Monday, according to video via Steelers.com. “I mean, like I said, people are going to drop the ball. I’m not perfect. Not going to sit up here and act like I’m perfect. I just go out there and play football at the end of the day. You know, it’s a lot of emotion going on in the game. Sometimes you drop the ball. Big deal. Bounce back from it, make another play. And that’s what I did. I was able to get in the end zone and still make a couple plays after the two drops that I had. And even when I did drop the ball this year, I’ve shown that I could respond in a positive manner. And that’s what I’ve been doing.

“So, you know, a lot of people talk about that, but they don’t notice that. I feel like that’s the main thing they focus on is the drops, but they don’t see all the good stuff that I’ve been doing throughout the whole season,” Johnson added. “So, it’s like, why do you continue to focus on that when I’m still obviously continuing to contribute and put points on the board? Have all these catches in the game throughout the season. So, it’s like it’s football at the end of the day. The best of the best are going to drop the ball and I’m only human. I’m going to drop the ball again throughout my career, so all I can do is just keep working.”

He’s shown he is willing to put in the work to try and correct some issues within his game. That those same issues popped up again in a win-or-go-home game was rough to see, but we’ve seen this guy bounce back time and time again. He’s still legitimate No. 1-type receiver that just needs a bit more development to occur in his game. You don’t find yourself in the conversation with those names above by accident.