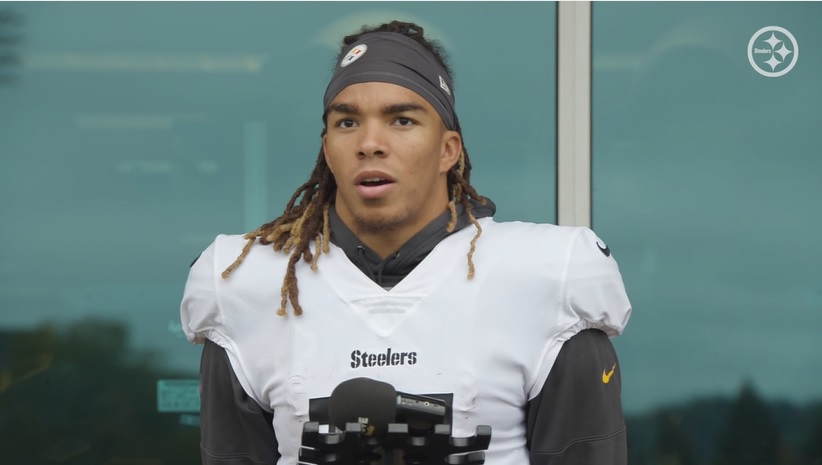 Coming off an impressive rookie season, expectations were sky high for WR Chase Claypool in 2021. Unfortunately for him and the Pittsburgh Steelers’ offense, he hasn’t met those marks. It’s been a year filled of frustration, drama, controversy, and his name being in the news for the wrong reasons. Despite a tough season, Claypool struck an optimistic tone about his future in a Saturday interview with the media.

Talking to reporters, Claypool was asked to sum up his performance.

“I would just correlate how my season has gone with how the team’s gone,” he said via Steelers.com. “In terms of that, I think there’s a lot of improvement. And I’m excited for the improvement in the road ahead because I know that I’ve only just scratched the surface.”

Playing 13 games this season, Claypool has caught 51 passes for 806 yards and just one touchdown. He’ll roughly equal his receptions and yardage from his rookie year, 62 for 873, while his touchdowns will dramatically fall after scoring 11 times as a rookie. If he doesn’t find the end zone over the final two regular season games, he’ll be the first Steeler ever to go from 11+ touchdowns one season to just one the next. If he scores again, he’ll become just the third Steeler to drop from 11+ touchdowns one year to just two the next, joining RB Willie Parker in 2006-2007 and QB Kordell Stewart in 1997-1998.

Claypool’s struggles have been evident since training camp with just an average summer showing. At the time, we said as much, giving him just a B- grade for his performance. Here’s part of what we wrote:

“Up-and-down camp for Claypool, who thankfully avoided any sort of serious injury after a scary-looking ankle injury late in the process. Claypool had a quiet start, losing some jump ball battles to Cam Sutton…Claypool needs to find some consistency in his game.”

Claypool never found that consistency, and his struggles this season are greater than what anyone reasonably projected. Off the field, he made comments about the team needing to play music at practice, and on it, he showed his immaturity with penalties and celebrations. He simply didn’t win downfield consistently enough to be the team’s big-play threat the Steelers needed him to be.

To be fair to Claypool, he’s battled a turf toe injury for a large portion of the season, a painful injury that probably hurt his ability to explode off the line and make cuts. To his credit, he’s also averaging nearly 16 yards per catch this season, nearly two yards better than 2020, and he’s made the occasional jaw-dropping contested grab.

But the bottom line is Claypool needed to play much better than what he gave the Steelers this season. He’ll need to have a monster 2022 campaign to turn his NFL career around. Especially if there is a new quarterback under center, who will depend on big guys like Claypool to play to their frame.