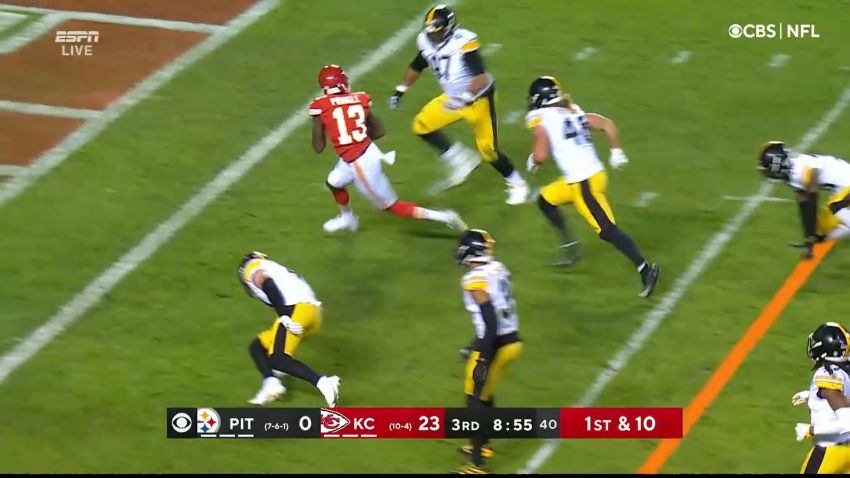 The last time the Pittsburgh Steelers and Kansas City Chiefs squared off inside Arrowhead Stadium, the Chiefs racked up 36 points offensively on a day in which the Steelers missed 11 tackles, seven of which directly resulted in three touchdowns for the Chiefs.

Now, just days ahead of a rematch with the Chiefs in Arrowhead in the AFC Wild Card matchup at 8:15 p.m. Sunday night, Steelers’ veteran cornerback Joe Haden, who recorded four tackles in the loss, said the Steelers must focus on tackling the catch, channeling their inner Dick LeBeau, who consistently talked about tackling the catch, keeping things in front of you and not giving up the big play as a defensive back.

Speaking with reporters Thursday ahead of the matchup with the Chiefs, Haden emphasized tackling the catch, which the Steelers really struggled to do in the blowout loss.

“It’s super important. Those dudes, like we said, Coach T [Tomlin]says that Travis Kelce’s the best run-after-catch tight end the world, you know?” Haden said to reporters, according to video via Steelers.com. “He proves it all the time. He closed games against the Chargers, being able to catch it and just zig-zag through tackles. Same thing with Tyreek Hill. You’re so afraid of his speed to get over the top of you, and sometimes you’ll be too far off and he’ll catch a pass and be able to make you miss and get vertical. So, just being able to stat as tight as possible to those dudes and making sure we know exactly where they are at all at all times.”

Tackling the catch will again be a challenge for the Steelers, as the Chiefs will see the return of All-Pro tight end Travis Kelce to the lineup after he missed the Dec. 26 matchup while on the Reserve/COVID-19 list. Kelce is known to be a dangerous player after the catch as a tight end, having zig-zagged his way through the Los Angeles Chargers’ defense to win a primetime matchup in overtime, and historically is really good in space with the football.

The play that broke the Chargers. Travis Kelce BROKE the Chargers pic.twitter.com/az0QEczN80

Add in the dynamic abilities of Tyreek Hill and the improvements from Mecole Hardman and Byron Pringle — two guys that torched the Steelers after the catch earlier this season — it’s clear just how important it will be for the Steelers to get guy on the ground quickly after the catch.

If the Steelers can avoid the killer missed tackles on defense in the Wild Card matchup, they should be able to hang around and make a game of it, assuming the offense gets off to a faster start than it did in the previous matchup.