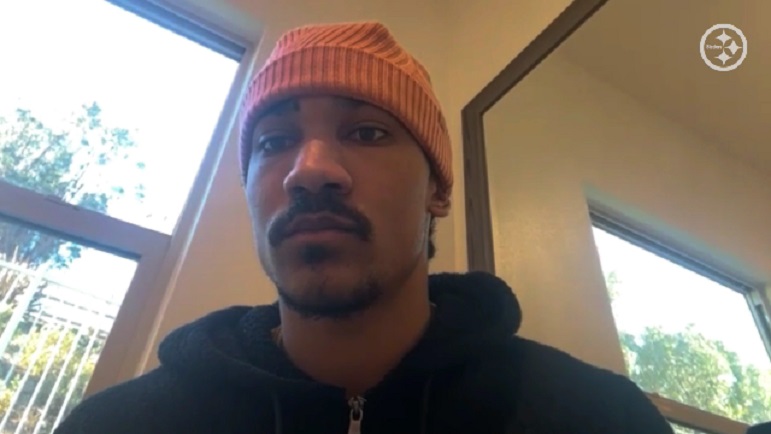 The 2021 season was quite an interesting one for Pittsburgh Steelers cornerback Ahkello Witherspoon, and probably one that he will not forget and one that he learned a lot from. After a season in Pittsburgh that included a lot of twists and turns and highs and lows, Witherspoon is now poised to become an unrestricted free agent again in March, and with a market value that is likely trending up. On Thursday, Witherspoon met the media, and during his interview he was asked if he has enjoyed his time with the steelers so far and if he has any desire to remain in Pittsburgh moving forward past the 2021 season.

“Yeah, I think I enjoyed my time here,” Witherspoon said via Steelers.com. “I think the biggest thing was just the familiarity with the defense. Just getting to understand it in those weeks that I wasn’t playing and then just the environment and just the simplicity, the approach to the game. And just minimizing the other team’s targets, winning in those important moments, those are all simple components of the game that I understand and I was just able to go out and apply it.”

After seemingly playing well for the Steelers down the stretch, Witherspoon was asked on Thursday about him now being set to become an unrestricted free agent in March, and specifically, how he will go about making a decision concerning his future once that time comes.

“Yeah, I think the biggest thing is just letting stuff kind of unfold and not getting caught up in an idea of how I want it to look or how I want it to go,” Witherspoon said. “I think when those opportunities arise and those conversations start to happen, I’ll be able to have a better understanding of my approach. But right now, I’m just kind of just going with the flow and enjoying these first few days of being off of work and just of checking out and kind of getting my mind off of the normal stress and the strain that comes with competing at a high level week in and week out. So, once again, I’m excited for those opportunities and when they come, I’ll have a much better understanding.”

In case you forgot already, Witherspoon originally signed a one-year, $4 million contract with the Seattle Seahawks as a free agent last March. However, after spending all the offseason and preseason with the Seahawks, Witherspoon was traded to the Steelers just prior to start of the regular season. After being inactive for eight of the Steelers’ first nine games of the 2021 regular season, Witherspoon finally started to see the field regularly. Additionally, he played well overall in the team’s final eight regular season games.

With that 2021 experience behind him now and with another trip through free agency a possibility, Witherspoon was asked on Thursday if his decision-making process this offseason regarding where he might end up playing in 2022 will be very dependent on where he thinks he might be the most comfortable.

“Yeah, I think it’s very important in terms of just the peace that I have in this process, because I know that stressing or wondering about where you’re going to be, you might not even be there come at the start of the season,” Witherspoon said. “So that’s kind of my approach in terms of stepping back and not trying to put too much in it or pretend like I know everything because I thought I did last year, and I was extremely wrong. And so, for me, once again, I think just going where you’re wanted is an absolute must and that was Seattle at a time last year and then that changed. So, I’m just very comfortable and I’m prepared to play football anywhere, really.”

One would think that the Steelers will do everything they can to get Witherspoon re-signed this offseason, and possibly even before he officially becomes an unrestricted free agent in March. While it did take Witherspoon half a season to finally start seeing playing time on a regular basis, he ultimately wound up logging 368 regular season defensive snaps. He finished the regular season with a team-high three interceptions to go along with nine passes defensed and 15 total tackles.

Witherspoon’s market value now figures to be higher than the $4 million that he signed for in 2021 so it will be interesting to see how much he winds up getting this time around as an unrestricted free agent and if the Steelers are the team that he winds up with. On the surface, it sounds like Witherspoon is very open to re-signing with the Steelers, especially if a good portion of the team’s 2021 secondary is back in 2022, as well.

“I think we have a lot of cohesion and that’s important just that brotherhood aspect that you can’t really see or measure,” Witherspoon said. “But the guys in the room are all respectful of one another. Extremely high competitors. Love the game. Very detailed, very nerdy when it comes to football and that’s the type of stuff you want to be around when you’re at the job day in, day out, waking up at 7:00 AM. So, it’s just important to have that type of passion for the game and that type of love around you and I think we have a great group of guys that exemplify that.”