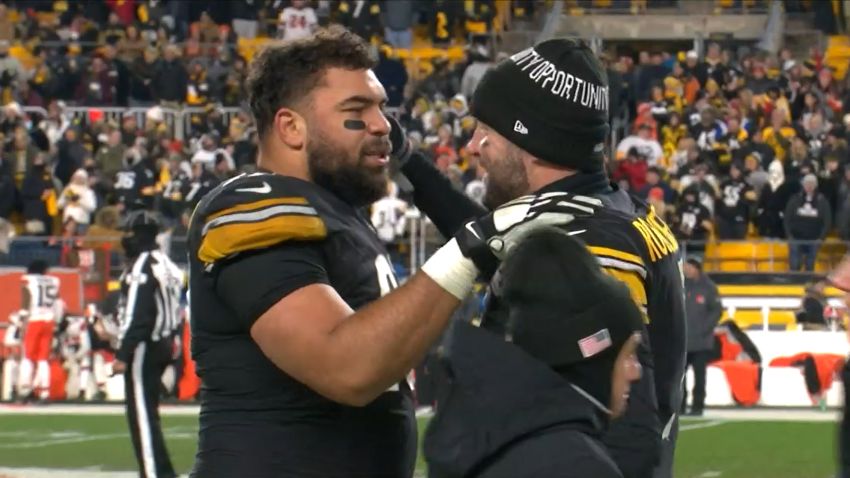 According to the number-runners, the Pittsburgh Steelers had about a 10 percent chance of making the playoffs today before kickoff. That chance is far higher now after defeating the Baltimore Ravens and having the Indianapolis Colts lose. The only thing standing in the way of them playing next week is the remote possibility of a tie between two division rivals.

Pittsburgh had a huge home win last week against the Cleveland Browns on a day that felt like there was little hope of the postseason, but not everybody was ready to hang their heads—one of them being defensive captain Cameron Heyward, letting quarterback Ben Roethlisberger know they’re trying to get him back to the dance.

“I told him after the Cleveland game, we’ve got one more, let’s see what we can do”, he told reporters today after the game. “I know Ben was like, ‘alright’. But just, give him a shot. Every time we’re in a game like that and it comes down to the last drive, we’ve got Seven as a quarterback, and we feel like if we give him a shot, he’s gonna produce”.

It wasn’t pretty, but the Steelers ended up pulling it out, 16-13, in overtime, defeating the Ravens for the fourth consecutive time and sweeping them two years in a row. It took a fourth-quarter comeback and then a game-winning drive in overtime, the sixth and seventh for him respectively on the season—both the most in the NFL. None of which is surprising to those who have been around him the longest.

“It’s toughness, and it’s clutchness. That dude just wants the ball back in his hands one more time”, Heyward said of Roethlisberger at the end of his final regular season. “When we don’t get off as a defense and let the game get out of hand, Seven’s gonna find a way. It’s not gonna happen in the first quarter, but just give yourself a chance. Give your quarterback a chance. They’ve got moving parts over there, but they’re starting to find a way to win”.

He finished the game completing 30 of 44 pass attempts for 244 yards, with one touchdown pass, a go-ahead, fourth-quarter, red-zone connection with Chase Claypool, and one interception, which admittedly was quite a bad play on his part in the first half.

In his final game at Heinz Field last week, he completed just 24 of 46 pass attempts for 123 yards with one touchdown and one interception. He’s not exactly going out in a blaze of glory, but he is going out winning games, and that’s what he’s always wanted his legacy to be.

Even in his unremarkable wind down, however, he still, as Heyward said, “made some really big plays for us at some really big times”. That included a huge fourth-down conversion in overtime to Ray-Ray McCloud that set up the game-winning field goal.

Ben Roethlisberger will retire having won 165 games in the regular season, with 41 fourth-quarter comebacks and 53 game-winning drives. He is indeed one of the most clutch players of all-time, and you’ll see him in Canton at the earliest possible moment.