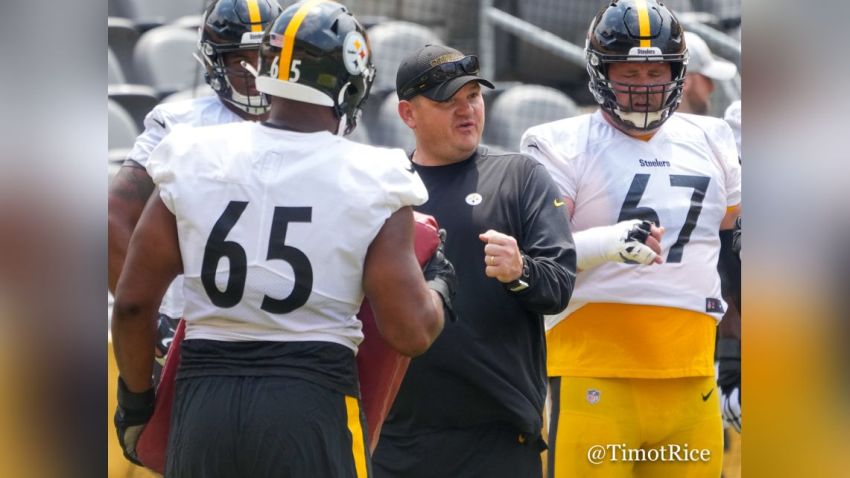 Topic Statement: Chris Morgan is making a convincing argument to be the Steelers’ next offensive line coach.

Explanation: One game into his potentially two-game tenure as the Steelers’ head offensive line coach, the team rushed for 190 yards with a game-clinching touchdown. We don’t know much about Chris Morgan, but we do know thanks to J.C. Hassenauer that he does do things a bit differently, including getting more position groups involved in the blocking conversation.

The Steelers never looked really even that close to as good as they did on Monday night in their efforts to run the ball, particularly with respect to the interior offensive line and their ability to pretty consistently generate push.

The Cleveland Browns actually have a good defensive line against the run, but they didn’t look like it on Monday night thanks to Morgan’s group. And by Morgan’s group, I’m also talking about the wide receivers and tight ends, who did their part in executing this run game, as well.

We’re talking about one game here. it’s just as likely that the Steelers struggle, as they have for most of the season, to run the ball in the season finale. They’re certainly not going to have another game against the Baltimore Ravens in the finale like they did on Monday against the Browns.

Morgan is the beneficiary of a season’s worth of growth and improvement, as well, especially from Najee Harris. And he didn’t have to deal with Kendrick Green at center, which was an addition by subtraction benefit.

Morgan might be competent, but the Steelers need somebody next season and beyond for their offensive line room who goes beyond that. They need another Mike Munchak, somebody of his stature. Maybe even the real Munchak, if the Broncos dump their staff this offseason. We should know by now not to make too much of small sample sizes, especially when there are other variables at play.