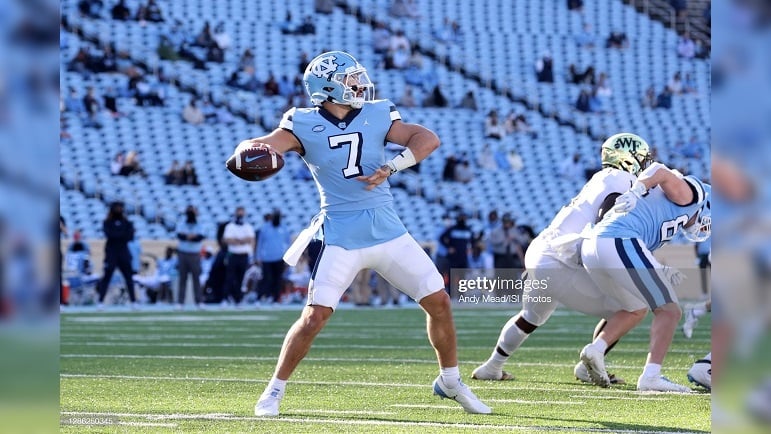 The 2022 NFL mock draft season is obviously well underway at this point with the Divisional Round of the 2021-2022 playoffs set to start on Saturday. On Wednesday, Dane Brugler of The Athletic released a new mock draft version and this time it includes two rounds worth of picks.

At 20th overall in his latest mock mock draft, Brugler has the Ssteelers selecting North Carolina quarterback Sam Howell. Below is what Brugler wrote for his reason for mocking Howell to the Steelers.

With Ben Roethlisberger likely having played his final game in a Steelers’ uniform, there is a “Quarterback Wanted” sign hanging on the front of Heinz Field. Although Howell’s junior season didn’t go exactly according to plan, he has NFL-level arm talent and mobility and is ready to step in as the Steelers’ starter from day one.

For his college career, Howell, who reportedly measures in at around 6006, 220-pounds, passed for 10,283 yards and 92 touchdowns with 23 interceptions in three seasons. He also rushed for 828 yards and eleven touchdowns on his 369 total attempts in college.

Howell will be one of the quarterbacks at the Senior Bowl this year so you can bet he’ll be receiving a lot attention while in Mobile, AL for the annual college all-star game. He’s considered one of the top six quarterbacks in this year’s draft class.

As for the Steelers second-round selection in Brugler’s most recent mock draft, he has them taking Boston College guard Zion Johnson at 52nd overall.

Johnson. Who reportedly measures in at 6026, 316-pounds, played in 36 games over the course of the last three seasons at Boston College. He played at left tackle and left guard during his career at Boston College. Like Howell, Johnson will be participating in the Senior Bowl a few weeks from now.

We will have full scouting reports of both Howell and Johnson on the site within the next several weeks so be on the lookout for those.