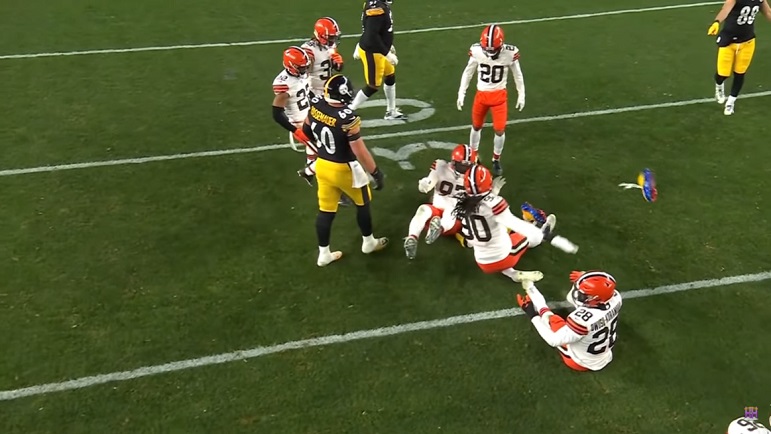 Cleveland Browns defensive end Jadeveon Clowney lost some money this past week thanks to a silly action by him during the Monday night game against the Pittsburgh Steelers.

On Saturday, it was reported that the NFL fined Clowney $12,875 for throwing the shoe belonging to Steelers wide receiver Chase Claypool in the second quarter of the Browns’ 26-14 Monday night loss at Heinz Field.

Not only did Clowney draw a 15-yard unsportsmanlike conduct penalty for the incident, the flag extended the Steelers’ drive, which culminated in their first touchdown of the game. The Steelers never relinquished that lead after that score.

Clowney’s stupid penalty came after Steelers quarterback Ben Roethlisberger completed a short pass to Claypool that picked up only 3 yards on third and 10. After the penalty on Clowney was assessed, the Steelers scored three plays later on a short touchdown pass from Roethlisberger to wide receiver Diontae Johnson.

“Yeah, I mean, it’s — you can’t do that. I mean, you’re hurting the team,” Browns head coach Kevin Stefanski said of Clowney’s penalty after the game. “It’s crazy. Not smart. You know, he felt like he was just — I’ll let him answer it.”

Clowney has yet to speak to the media since the Monday night loss to the Steelers.

In related news, Browns defensive tackle Malik Jackson was reportedly fined $10,353 by the league this week for his unsportsmanlike conduct penalty on a 48-yard field goal by the Steelers’ kicker Chris Boswell with 5:48 remaining in the fourth quarter.