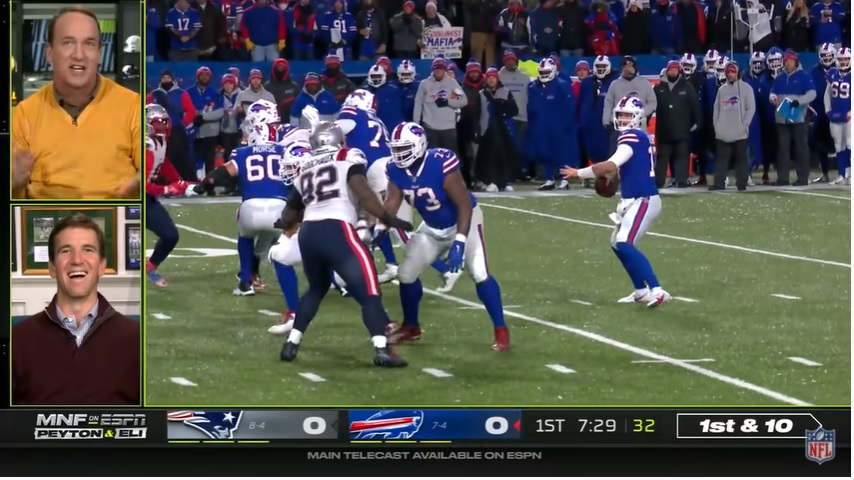 Pittsburgh Steelers’ fans missed out on the Manning brothers during the team’s first Monday night appearance this season. But Peyton and Eli are back to cover Ben Roethlisberger’s likely final home game of his career. And they have a pretty solid lineup of guests to watch the game with them.

Back Monday on ESPN2 – at EXACTLY 8:13pm ET. pic.twitter.com/X7c6aVpVze

A very Steelers-centric group of guests with the over/under on Roethlisberger questions set to 300. Cowher will certainly be able to share some stories of Roethlisberger’s early days, including his first Super Bowl victory. I wonder if the Mannings will ask about the decision to draft Roethlisberger. Reportedly, Cowher wanted to take OG Shawn Andrews but Dan Rooney convinced the team to select Roethlisberger instead. The rest is history.

Goodell’s interview will be a great chance for viewers to go refill their drink while Snoop Dogg is a big-time Steelers’ fans. That should be a fun conversation.

Rodgers as the final guest will certainly be interesting. You can bet Peyton or Eli will ask Rodgers about his future with Green Bay and if there’s a chance he’ll want to come to Pittsburgh in the offseason. Mike Tomlin and Rodgers had a viral exchange during their matchup earlier this year and Rodgers has repeatedly talked about the respect he has for Tomlin. Rodgers has said he plans to make his offseason plans made known shortly after the season ends. A Sunday report suggested the odds of Rodgers staying in Green Bay are increasing.

The Monday Night Manning Cast has been a hit with fans this season, listening to a Hall of Fame quarterback (and also Eli) talk about the game in a relaxed, fun environment. The Mannings were on a bye when Pittsburgh beat Chicago earlier this year so it will be cool to see how they talk about the Steelers and Roethlisberger.

The only downside to the Manning Cast is they can be a distraction to the game itself and for fans heavily invested in the outcome of the game – which is pretty much all of them – hearing “Peyton Manning has a big head” jokes aren’t as funny when you’re sweating out a Week 17 elimination game.