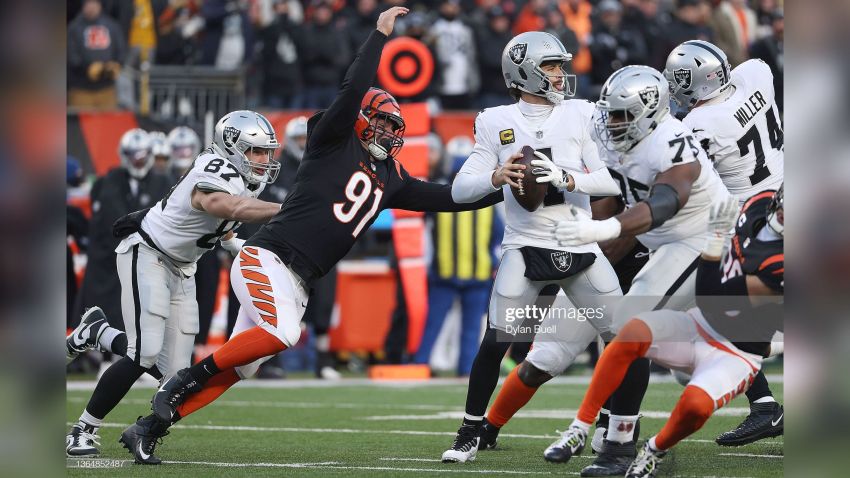 There was some question for the Cincinnati Bengals when they made the decision to let free agent Carl Lawson walk, only to turn around and sign Trey Hendrickson to play the same position. Lawson signed with the New York Jets, and was supposedly looking really good—until he tore his ACL before the season began.

Hendrickson, coming over from the New Orleans Saints, had a career year, however, playing in 16 games, recording 14 sacks, with 12 tackles for loss, and 27 quarterback hits. He had three forced fumbles, the same amount that he had in his entire four-year career with the Saints.

In other words, he became one of their most indispensable defenders, though, of course, that’s what they paid him to be. And they will have him out there for their Divisional Round matchup—their first appearance in the Divisional Round since 1990—after a scare when he suffered a concussion in their first-round playoff game.

Hendrickson only played 33 snaps against the Las Vegas Raiders last week prior to exiting with a concussion, but he did manage to record a sack and a forced fumble for his efforts. This weekend, he’ll be tasked with slowing down the Tennessee Titans’ run game, which could get a boost with the return of Derrick Henry, arguably the best running back in football.

Bengals head coach Zac Taylor called Hendrickson one of their “premier players” and talked about how his presence was important because of the fact that he has been on this stage before during his time with the Saints, something the rest of the locker room can’t relate to. The Saints played seven playoff games during his time there, though he only played in five. In the one in which he played more than half the snaps, he had a sack and two tackles for loss.

Getting one of their key defensive linemen back is all the more important because they also lost defensive tackle Larry Ogunjobi for the remainder of the postseason due to injury. He suffered a foot injury against the Raiders and was placed on the Reserve/Injured List.

Bengals second-year quarterback Joe Burrow said that fans should get used to seeing the team winning in the postseason, after the team won just four games in his rookie season (including only two with him before he went down with a knee injury).

Maybe for once they won’t have to rely on bringing in somebody from the outside who can relay to the locker room what it means to play and succeed in a postseason environment, because they’ll already have a locker room full of guys who have achieved that.