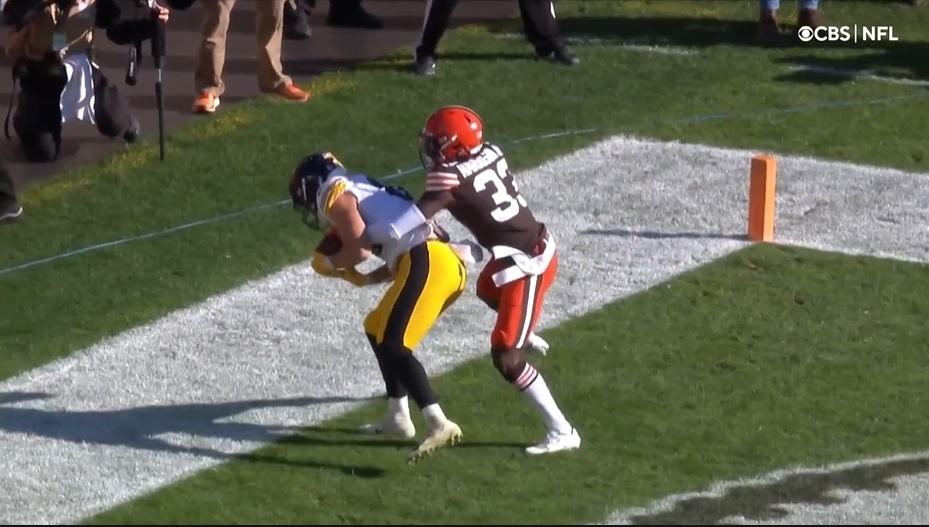 The Raiders have two receivers in the slot to the right and a tight end to the left on the end of the line of scrimmage. They have a fullback and running back in the I formation behind the quarterback who is under center. The Browns are in their nickel defense with a safety playing like a linebacker.

The quarterback Derek Carr (4) will take the snap and fake the ball to the tailback drawing up the linebacker Jeremiah Owusu-Koramoah (28) who will then take him in coverage. From the right slot wide receiver Zay Jones (7) will run a deep route cutting toward the corner before angling back inside to the post. Receiver Desean Jackson (1) will release behind him and run a deep out route. From the left side tight end Foster Moreau (87) will run a dig route while the fullback Sutton Smith (41) runs in to the flat.

The route by Jones will hold the corner Greedy Williams (26) on the outside with the angle to the corner and then get picked up by the safety John Johnson III (43). Inside linebacker Malcolm Smith (56) will try to run with Jackson up the middle before he breaks outside. This leaves the middle open where Moreau’s route will be behind Owusu-Koramoah and in front of Smith. Carr steps up in the pocket and hits him for a 14 yard gain to make the third down play manageable.

Steelers Scenario – Chase Claypool will run the deep clear out route with Diontae Johnson running the deep out route. Pat Freiermuth could run the dig route and if he’s not open the fullback or running back in the flat are options

Las Vegas starts with two receivers tight to the formation to the left. They have a tight end on the wing to the right and a receiver in the slot. The running back flanks the quarterback to the left who is in shotgun. The Browns are in their nickel grouping and will play Man coverage with one safety deep.

Prior to the snap, receiver Hunter Renfrow (13) will motion to the right and stack behind Jones who is in the slot. M.J. Stewart (36) is the slot corner and he will travel with Renfrow signaling Man Coverage. Moreau will shift to the left of the formation and settle on the wing with Owusu-Koramoah moving to the outside with him. Running back Josh Jacobs (28) will then shift to the right of the quarterback with linebacker Smith shifting to that side as well.

Jones will run a deep corner route drawing double coverage from Johnson and Williams. Renfrow will release behind Jones and angle to the inside before breaking on an out route. Jacobs will release into the flat. Smith should be with Jacobs in coverage but it looks like he is expecting a switch. Regardless, the route from Renfrow will block Smith from getting out on Jacobs and leaving him open for a 17 yard gain.

Steelers Scenario – The pick/rub route is great to get space for receivers. Claypool would again run the clear out route and Ray-Ray McCloud would run the out route from the slot. This would get the ball to Najee Harris in space.

The Raiders have three receivers to the left side and a tight end to the right on the end of the line. The running back is to the right of the quarterback who is in shotgun. Cleveland is in Man coverage with a safety deep.

To the right, Moreau will chip on the edge before releasing to the inside on a route to the middle while being covered by cornerback Denzel Ward (21). The running back Jalen Richard (30) will loop outside with coverage from a linebacker. To the left, Bryan Edwards (89) is going to run a deep in breaking route working through tight Press coverage. In the slot, Renfrow will draw double coverage. Jones is inside and will run an out route while being covered by safety/slot Jovante Moffatt (35).

This route combination of Jones and Edwards has a chance to turn in to rub routes. But in this case Cleveland chooses to not bring Ward to the other side of the field and leaves him on a tight end putting Moffatt in coverage on a speedy receiver. Jones wins the route easily for a sixteen yard gain.

Steelers Scenario – These are the matchups the Steelers need to take advantage of to keep the chains moving. You put Claypool on the outside to run the deep in route and Johnson in the slot against the nickel corner. If Ward comes across you have Harris and Freiermuth in one on one situation on the backside.