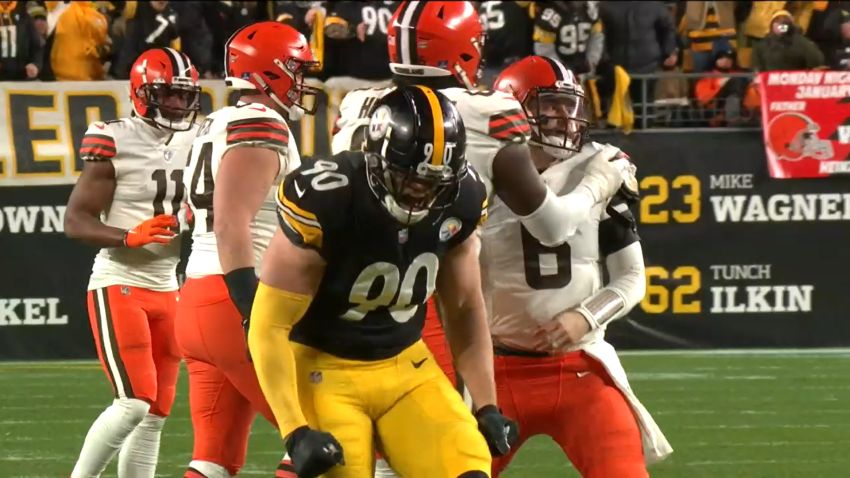 Suffice it to say that Cleveland Browns quarterback Baker Mayfield wasn’t exactly thrilled with how the night went for his team, or for himself. Yesterday’s game isn’t ever going to be mistaken for a quarterback clinic, Mayfield and Pittsburgh Steelers quarterback Ben Roethlisberger dueling to see who could throw the most passes short of the sticks on third and long.

Mayfield finished yesterday’s game 16 for 38 for 185 yards with two touchdowns and two interceptions. And quite a bit of that came in just the final few minutes of the game, while it was mostly out of reach at that point.

But what he really didn’t like was getting sacked nine times, the most the Steelers have had in a game in nearly a couple decades…since before Dick LeBeau was here. To exercise my French, Baker had his ass handed to him in ways he’d never had before. The nine sacks taken was comfortably the most in his career, having once taken six sacks in a game in 2019.

“Obviously their front’s pretty good, has been for years”, Mayfield said about the defense that has taken him down more often than any other thus far in his career. “But when you got T.J. Watt over there and you’re not giving your rookie tackle a whole lot of help, it’s not really good for him”.

Four of the Steelers’ nine sacks came from Watt himself, working against rookie fourth-round pick James Hudson III, who was making his third start in place of Jack Conklin at right tackle. Suffice it to say that he had his hands full. He also allowed a sack from Derrek Tuszka coming off his side.

So his credit, Mayfield wasn’t overly emotional or upset when he made his comment, but rather said it matter of factly. It was also the first question that he was asked on the night, which guaranteed that the Browns would have yet another losing season following last year’s one-season respite from futility.

Of course, it doesn’t matter who Watt is going up against at tackle; he’s probably going to have success against them. He’s just the best defensive player in football right now, and that even goes for when he isn’t 100 percent healthy, which he rarely has been this year.

The Steelers signed Watt to a record-breaking contract extension, and he has certainly delivered the goods, blowing past the team’s single-season sack record of 16, now with 21.5. If he’s not the obvious frontrunner for the Defensive Player of the Year Award, then we’re obviously part of some running joke.

He also has four forced fumbles, 20 tackles for loss, and six passes defensed, along with 36 quarterback hits, in spite of the fact that he has dealt with a good three or four separate and distinct injuries this year, which have caused him to miss two full games, most of three others, and to play clearly injured in multiple other games. He’s dealing with cracked ribs right now, but you wouldn’t have known it last night. Next week, it’s Patrick Mekari and the team who has allowed the most sacks in 2021: The Baltimore Ravens.