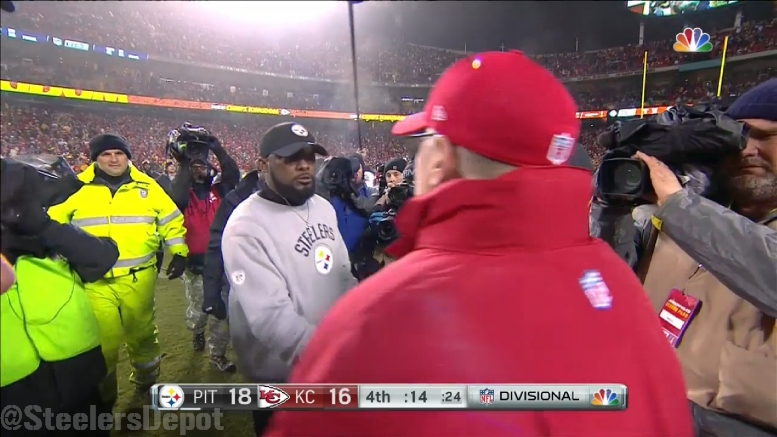 For the 10th time in his 15 NFL seasons, Pittsburgh Steelers head coach Mike Tomlin has his team in the playoffs. Unfortunately, he has only won a game in four of those nine previous postseason appearances, and they are nearly two-touchdown underdogs heading into this weekend’s contest against the second-seeded Kansas City Chiefs.

Their opponents, however, are taking nothing for granted after losing out on the top seed. Head coach Andy Reid is very familiar with Tomlin’s body of work and how the Steelers organization has been run for some time. And he knows the postseason is a different beast.

“We look forward to playing Pittsburgh. We know they’re very, very well-coached. Great organization, and a good football team”, Reid told reporters on Monday. “The playoffs, it really doesn’t matter what you’ve done before. When we play, it’s about now. Everything’s a little faster in the playoffs, and more aggressive. It’s just the nature of this thing and how it works. We’ve got to make sure that we get ourselves right, and go through that process”.

The Chiefs have won nine of their previous 10 games heading into the postseason, with only a 34-31 loss to the Cincinnati Bengals in Week 17 as a blemish. The AFC North champs overcame three separate 14-point deficits in that game before winning on a last-second field goal.

Optimists will rush to point out the success the Steelers had back in 2005, marching through the postseason as the sixth seed, winning the Super Bowl by going through the top three seeds in the AFC and the top seed in the NFC.

That was an 11-5 team with a top-five defense and a top-five run game, however. Outside of their defensive All-Pros, the best thing that can really be said of this season’s 9-7-1 squad is that Ben Roethlisberger can still turn in that clutch throw late in the game. Seven of their nine wins game via game-winning drives in the fourth quarter and overtime.

So they’re never out of a game, except when they are. And their previous game this season against the Chiefs is one of the games in which they were out, losing 36-10, and that only following a touchdown with three minutes to play. That game alone accounts for nearly half of their negative scoring differential on the season of minus-55.

There’s a reason that people on the outside are not overly confident in the Steelers’ prospects of winning this game. But fortunately, that doesn’t matter. What matters is what happens on the field, and I’m sure those in the locker room believe they are capable of winning. They did, after all, beat the number one seed, the Tennessee Titans, just a week before playing Kansas City.