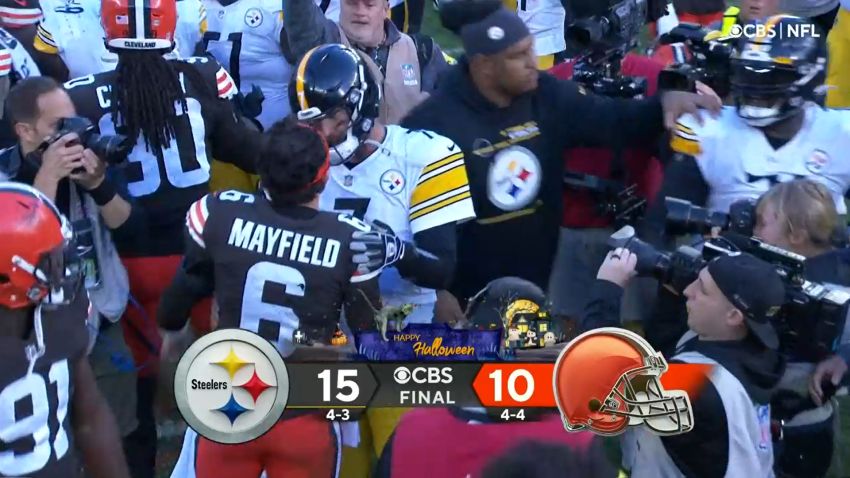 Though there may not be much mutual respect from the fan bases of the Cleveland Browns and the Pittsburgh Steelers ahead of the Monday Night Football matchup between the two heated AFC North rivals at Heinz Field in what is very likely Ben Roethlisberger’s final home game in his illustrious Steelers’ career, there is mutual respect and admiration coming from the players.

After Roethlisberger stated to reporters that all signs point to this being his final home game in his 18-year career, that added more anticipation to Monday’s matchup in front of a national audience as the Steelers and Browns not only remain in the hunt for the AFC North division title, but a spot in the AFC playoffs as a Wild Card team, as well.

Knowing what’s at stake, Cleveland quarterback Baker Mayfield told reporters Friday that he’s looking forward to the atmosphere at Heinz Field, and has nothing but respect for Roethlisberger, what he’s meant to the league and the AFC North overall throughout the years.

“With everything in our division, the situation at hand for both teams right now, regardless of Ben’s situation, I think it would be a great environment,” Mayfield said Thursday, via Marla Ridenour of the Akron Beacon Journal. “And to add on top of that, everything that he’s given to that franchise over the years, the success he’s had consistently for a very, very long time. I have nothing but respect for Ben.

“So I’m expecting an even better environment. Both teams playing for the livelihood of the playoffs at hand,” Mayfield added. “It’s just one of those things that everything’s aligning to where this game matters quite a bit. But for us, we need to handle it like any other game, one play at a time, and do our job at the best possible level we can.”

Roethlisberger is 24-3-1 as a starter against the Browns, including 0-1 in the playoffs. The Browns’ postseason victory, a 48-37 decision, came in the AFC Wild Card game in Pittsburgh on Jan. 10.

As a fellow quarterback himself, Mayfield was asked what he admires most about Roethlisberger throughout his career. Unsurprisingly, Mayfield pointed to Roethlisberger’s ability to extend plays and make big plays when it matters most, something Mayfield has struggled to do this season when the Browns have needed him to step up.

“He extends plays, but he trusts his guys thoroughly,” Mayfield said. “He trusts his receivers, tight ends, all those guys to make plays for him and he’s done it consistently no matter who’s been out there with him.

“When it comes to fourth quarter or coming back and sparking drives for a comeback, when a play’s needed to be made he’s consistently done that for a long, long time. That’s just something that you can’t teach. He’s just had that and that’s why he’s had success for so long.”

Does he have one more win left in him against the Browns? That remains to be seen as his play has regressed as of late, along with the offensive line in front of him.

But on a stage like Monday Night Football, knowing he’s going against his hometown team that passed on him in the 2004 NFL Draft, and knowing he’s already stated this could be it, don’t be surprised if Roethlisberger turns back the clock one more time for a vintage Ben Roethlisberger performance.