With Week 16 in the books, and two games left in the season against AFC North opponents, I wanted to provide a look at divisional data and takeaways. First, a reminder of current standings: 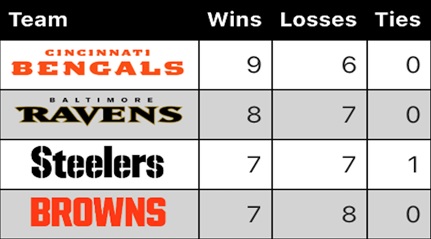 The Steelers currently sit at third in the division, and while the probability for the playoffs are low, we can see how important their final two games are. If Pittsburgh can win again against the Browns (15-10) and Ravens (20-19) to close the season, what a welcomed return of optimism that would be after such an embarrassing loss to the Chiefs and recent struggles. Even so, they would need to get lucky with help from other teams to make it to the postseason.

The Bengals are in the driver’s seat in the AFC North, with a tough matchup against Kansas City in Week 17 followed by the Browns in Week 18, losing to the latter earlier in the season for their only division loss to date. If the season ended today, Cincinnati would represent the AFC North, winning twice against the Steelers and Ravens, and it will be interesting to see if they are able to continue their strong play coming off an impressive performance against the Ravens (without quarterback Lamar Jackson).

Baltimore’s currently second in the division, and it will be interesting to see the availability and/or effectiveness of Jackson as they close the season against a strong Rams team followed by a crucial matchup with the Steelers. The Ravens are currently 1-4 in the division and have done well overcoming injuries, but would be out of the playoff picture as we sit here today.

The Browns are last in the division and getting many starters back after being ravaged by COVID, which should make for a competitive and crucial matchup with the Steelers who will be looking to rebound and make a statement. Cleveland closes the season against the Bengals, again highlighting how crucial the final two games are with the records so tight and the room for error at a minimum with all the division matchups.

Next let’s look at data, starting with Expected Points added (EPA) for the AFC North offenses by week: 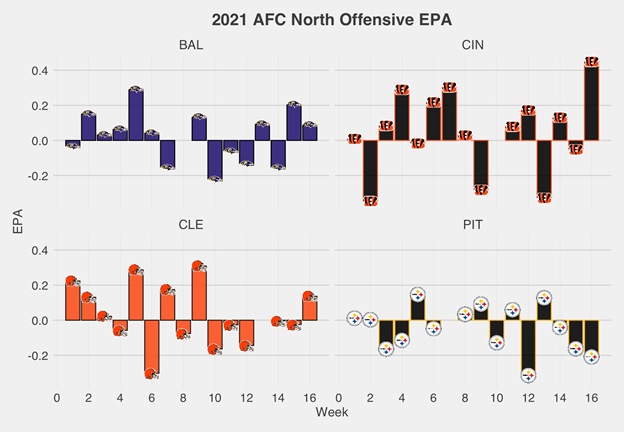 Here we can see trends as opposed to overall numbers that I have provided throughout the season. Each team has had their ups and downs, but the most consistent recent trend is the discouraging below the line play for Pittsburgh the last three weeks. Also, no performance above a 0.2 EPA, along their worst EPA performance against Cincinnati in Week 12. The Bengals were off the charts good last week (best result on the graph) and have had a positive EPA four of the last six weeks since the bye. Baltimore fared stronger prior to their bye week overall with five positive EPA performances, their best result in Week 5 (fourth best on the graph), worst mark in Week 10, and fresh off two positive performances. Cleveland bounced back and forth from Week 3-10, landing back in the positive last week and their best result (second best on the graph) in their win against the Bengals in Week 9.

Next, let’s look at EPA for the defenses: 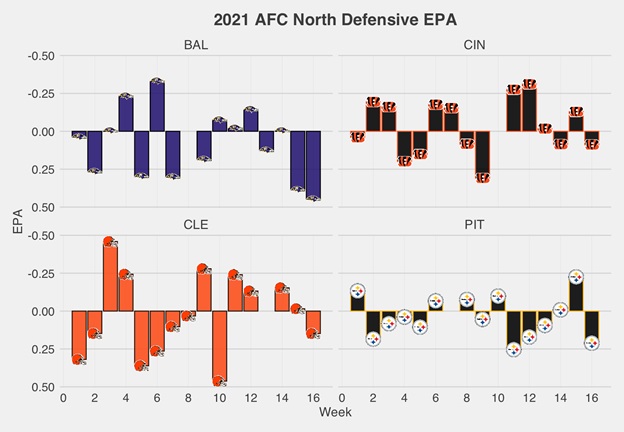 Pittsburgh has had nine below the line performances on defense with their best result in Week 15, which is also the lowest best performance of the four teams! Their lowest marks have not been as extreme as the Browns and Ravens, but definitely not the typical Steelers defense we are accustomed to seeing. Cleveland has been the most up and down in the metric, with their best mark in Week 3 (tops the graph) and worst being Week 10 (worst result of the graph)! Baltimore’s last two weeks have been rough, with their worst mark against the Bengals stellar offensive showing last week and will be interesting to see if that negative trend continues. Cincinnati is closer to the midline similar to Pittsburgh, with their worst result in Week 9 when they lost to the Browns.

How about success for offense and defense from nflfastR, which is defined as EPA > 0 for each play: 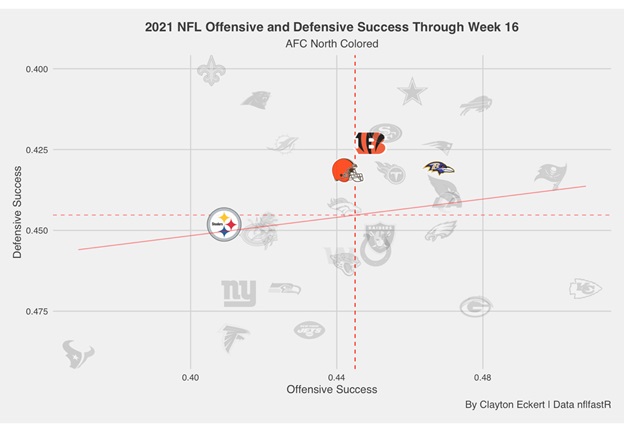 The Ravens lead the AFC North on offense ranking ninth in the NFL, along with their result on defense which is second in the division and also ranks ninth league wide! Cincinnati has the top rank on defense which is good for sixth in the NFL and a second ranked offense in the division, just above the NFL mean ranking 16th. The Browns have the third AFC rank in both data points, above the mean on defense for the 10th rank in the league along with a below the mean offensive result that ranks 17th. Pittsburgh lands by themselves on the left and last in both metrics, the only division team below the mean on both defense and offense, ranking 17th on defense but especially low in the latter for 30th the league!

Here is another points view from ESPN: 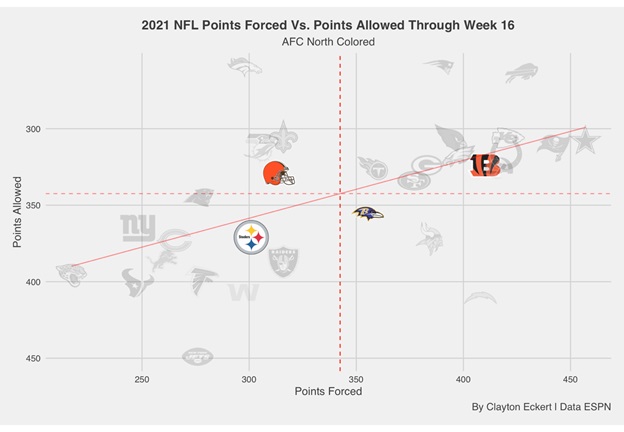 I also wanted to look at takeaways and giveaways: 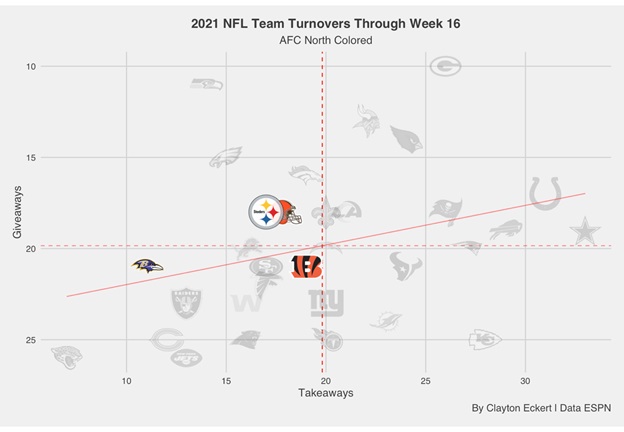 Pittsburgh and Cleveland land next to each other on the graph, above the mean and tied for the best in the division with 18 giveaways, with the Bengals and Ravens also tied but below the mean with 21 giveaways. Cincinnati has the best AFC North mark with 19 takeaways, but all four teams are below the NFL mean! Cleveland is second with 18, followed by the Steelers 17, and Baltimore further behind with only 11 takeaways which is 2nd worst in the NFL!

To close I wanted to provide personnel percentages, and overall pass/run rates along with success rates from Sports Info Solutions for more context and takeaways for the team’s plan of attack (Personnel = RB-TE):

Baltimore and Cincinnati both have pass rates of 57%, just below the NFL average along with the same success (48%) landing just above average! This means they also have the same run rate (43%), but the Ravens have the best run success by far (56%) which is tied for second in the NFL! Cleveland has the lowest pass rate (54%) in the division, tied for sixth lowest in the league, and just below NFL average in pass success. Their run rate is the highest in the division (46%) and tied for third in the league along with a 49% success rate, right at league average but tied for the most yards per carry on running plays. This has been the kryptonite of the Steelers run defense, allowing successful and explosive runs, and it will be very interesting to see if they can overcome or continue to be their demise to close the season against two great run teams.

I hope you enjoyed the dive into the numbers and outlook of the division as we head into these crucial games to close the season. What are your thoughts and takeaways for the rest of the season? What will the Steelers final record end up being? Thanks for reading and let me know your thoughts in the comments!