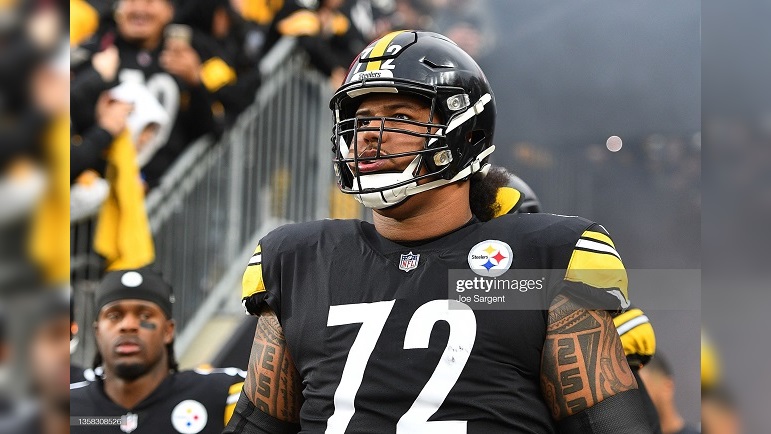 Reasoning: Signed to a two-year, $9 million contract last offseason coming off of a torn ACL, Zach Banner was supposed to be the Steelers’ starting right tackle in 2021 after winning the starting job the year before and promptly injuring his knee, before a setback in his recovery saw him miss out on the job and play just a handful of offensive snaps all season.

The Steelers have some important decisions to make this offseason. One of those decisions is whether or not they still think that Zach Banner is capable of being their starting right tackle. He was supposed to have been the starter for the past 35 games now, including the postseason, but he only started one—the 2020 regular-season opener, in the late stages of which he tore his ACL.

Banner was a fourth-year player at the time that occurred. The Steelers showed their faith in him when they chose to re-sign him, giving him a two-year deal worth $9 million, most of which comes due in 2022 in the form of a $5 million base salary.

Chukwuma Okorafor started the rest of the 2020 season after Banner was injured. With Alejandro Villanueva gone in free agency, he was to kick over to the left side with Banner playing on the right side. When the latter had a setback in his rehab, however, Okorafor kicked back over to the right side and rookie Dan Moore Jr. played left tackle.

By the time Banner was at a place where the Steelers were comfortable activating him from the Reserve/Injured List, the offensive starters had already become entrenched. And yet even when Okorafor missed a game, they started Joe Haeg at right tackle instead.

And then they started Haeg at left tackle and Moore missed a game, instead of kicking Okorafor to the left side and playing Banner. So they had multiple opportunities to get him a start and they declined to. He ultimately played five offensive snaps across four games in jumbo packages, a role he popularized as ‘number 72 reporting as eligible’ in 2019.

I’m sure he’d moved past that role by now. Unfortunately, a lack of cooperation from his knee has thus far robbed him of the opportunity to prove that he is capable of being a full-time starter. And if the Steelers can’t counting on him starting (Okorafor is an unrestricted free agent), they will have to decide if $5 million is worth the price of figuring out his role.